/sites/all/themes/penton_subtheme_wealthmanagement/images/logos/footer.png
Recent
Recent
Trust & Estates: May 2022 Digital Edition
May 19, 2022
Eight Must Reads for the CRE Industry Today (May 19, 2022)
May 18, 2022
Russian Billions Hidden in US Spur Backlash to Financial Secrecy
May 18, 2022
Mariner Wealth Advisors Expands in Michigan With Emerson Wealth Acquisition
May 18, 2022
Featured
The 10 Best and 10 Worst States in Which to Retire in 2021
Jul 15, 2021
Poll: 15 Classic Books on Investing and the Markets
Apr 03, 2020
Fifteen Must-Listen Business Podcasts for Advisors
Aug 14, 2020
Celebrity Estates: Jay Leno and Planning for Classic Car Collections
Feb 22, 2022
IBD Report Card
brought to you by 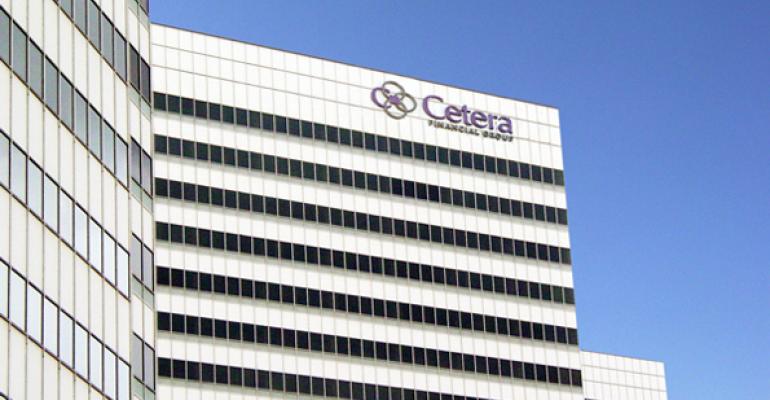 Nicholas Schorsch’s RCS Capital Corp.’s recent acquisition spree of independent broker/dealers has put the fear of God into some independent reps thinking “could my firm be next?”

The fear their firms will be acquired, fundamentally changing the culture of the b/d, was mentioned over a dozen times in an open-answer question about advisor concerns in REP.’s 2014 Independent Broker/Dealer Report Card. That was far more than any other concern.

It’s a testament to the fact that overall, advisors are very happy with their brokerages; nine

out of 10 said they would likely be with the same one a year from now. Still, 35 percent said that if they were to consider jumping ship, it would be because of the strategic vision of the firm and upper management. “Only if the firm were sold would I even consider moving,” one advisor wrote. Another added he would leave “if the b/d changed or was absorbed by another [that] did not have [the] same values.”

“People just don’t want to have a change if they’re comfortable,” says Alois Pirker, director of research for Aite Group’s wealth management division. “The transition to something new is harder.”

A merger has the potential to knock people out of their comfort zones. It can have a very real implication for the advisors’ day-to-day lives. Consider technology and back-office operational support: Usually the desktop operations are very different from firm to firm, so when they merge, someone has to change platforms, Pirker says. “It’s an important part of their life,” he says.

In recent interviews, Schorsch downplayed the potential changes for advisors. But Pirker predicts that the b/ds will eventually move off of Pershing’s platform and toward becoming collectively self-clearing. 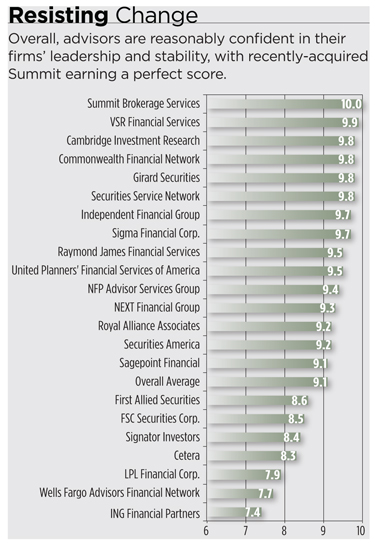 from Pacific Life in 2007. While the three firms expected to continue to clear with Pershing, two years later, LPL moved them into its self-clearing platform.

But while advisors at firms including NFP Advisor Services Group, United Planners’ Financial Services of America, Independent Financial Group and VSR Financial Services are fearful of a possible acquisition, it seems that the advisors who have been through a recent merger are more sanguine. One Cetera advisor noted he would very likely still be with the firm a year from now “unless something changes with the upcoming sale...”

In fact, of the firms recently acquired by RCS Capital highlighted in REP.’s survey, Summit scored a 9.9 overall score, while Cetera and First Allied received lower scores of 8 and 8.4, respectively. Advisors scored all three firms higher on leadership and stability, with Summit earning a perfect score of 10, First Allied earning an 8.6 and Cetera an 8.3.

“Our advisors are fine with it because [RCS Capital is] well-capitalized, they’re going to let us continue the boutique culture we’ve created and they’re going to run their firms separate and keep the cultures the same,” says Summit’s president Marshall Leeds. He noted the agreement with RCS Capital allowed the advisors access to the firms’ technology and additional fee-based products.

“It would be stupid to screw with this culture because we don’t have advisors leave and we’re growing at 20 percent a year.” Leeds also noted that Summit has not lost an advisor since the acquisition announcement in November. Schorsch made similar statements regarding First Allied’s advisor force.

Advisor fears are overblown, Leeds says. Buyers are well aware the best way to approach successful independent brokers is to give them more tools, not to stand in their way.