The state of financial services technology has been a perennial source of complaint for brokers, seemingly going back to when ticker tape machines tapped out stock prices across telegraph wires in the early 1870s.

For years, the wirehouses have struggled to meet the expectations of their brokers when it comes to their advisor platforms—including account aggregation, financial planning, record keeping and customer relationship management. And this year’s annual Broker Report Card shows only marginal improvement.

“There’s no question that technology is the single biggest thing captive advisors complain about. Where firms make it a priority is where you’re going to find greater overall advisor satisfaction,” says Mindy Diamond, head of recruiting firm Diamond Consultants.

Overall ratings of technology and advisor workstations have been slowly ticking upward in recent years. Advisors gave traditional wirehouse firms an overall average rating of 7.3 this year (compared to the 7.8 average when scores from Raymond James and Edward Jones were included), up from 7.2 last year and 6.8 in 2012. Advisors were asked to rate their satisfaction with the technology on a scale of one (worst) to 10 (the best). 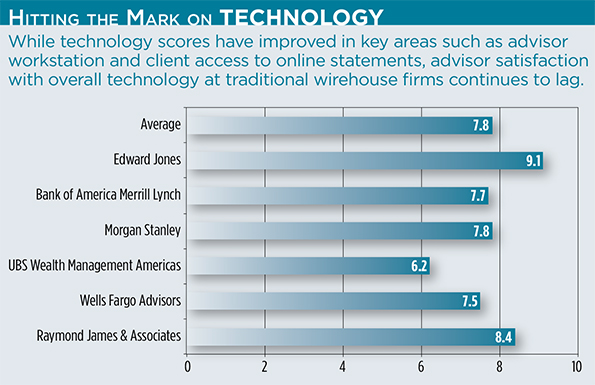 Among traditional-wirehouse advisors surveyed, those at firms with widely publicized technology rollouts fared better than those making quieter changes. Morgan Stanley and Merrill Lynch—which introduced major initiatives, including the Merrill One managed accounts platform and Merrill Lynch Clear, over the past year—had the highest overall technology ratings at 7.8 and 7.7, respectively.

Morgan Stanley’s score is a turnaround from a year ago, when advisors rated the quality of technology 5.9. Following the extremely unpopular migration of both Morgan Stanley and Smith Barney advisors onto the 3D platform following the 2009 merger, the firm regrouped. In January 2013, Morgan Stanley announced an 18-month, $500 million upgrade and brought Chris Randazzo on board to see it through.

“We are systematically moving forward on the technology front,” says Wealth Management President Greg Fleming. “We’re clearly further along than we were in the middle of 2012.”

Fleming says Morgan Stanley is focused on the digital experience, particularly around mobile. “Mobile is a big thing, so we’re investing a lot there and you’ll see a lot of different applications coming out over the course of the final months this year and into 2015,” he says.

At Merrill Lynch, the firm has spent $100 million to develop the new Merrill One. Over 90 percent of advisors with fee-based business are utilizing it, the firm says. “We like the technology available to us at Merrill Lynch. We feel we have a broader-based platform of investments and additional services that make us more competitive than independents,” one advisor wrote.

Wells Fargo and UBS, both of which have been fairly quiet about their technology plans over the past year, saw the lowest ratings, at 7.5 and 6.2, respectively. For UBS, the firm’s ambitious cost-cutting goals and the prioritization of rich recruitment compensation packages may be keeping technology projects on the back burner. “Many advisors feel they’re working with an antiquated technology platform,” says Todd Taylor, partner and head of the wealth management sector, Americas at Heidrick & Struggles. “There’s been some recent talk about upgrades, but advisors are skeptical and the vision may not be realistic.”

In the case of Wells Fargo, it may be less about quality of the firm’s technology and more about advisors not knowing what’s coming down the pipeline, Taylor says.

“The firm is not doing a lot publicly on the technology side, but there’s a lot of activity and investment happening there. The scores are not reflective of that yet,” he says. The firm just wrapped up migrating its advisors onto the SmartStation 2.0 platform and has plans to roll out a client tablet application across all its channels in early 2015.