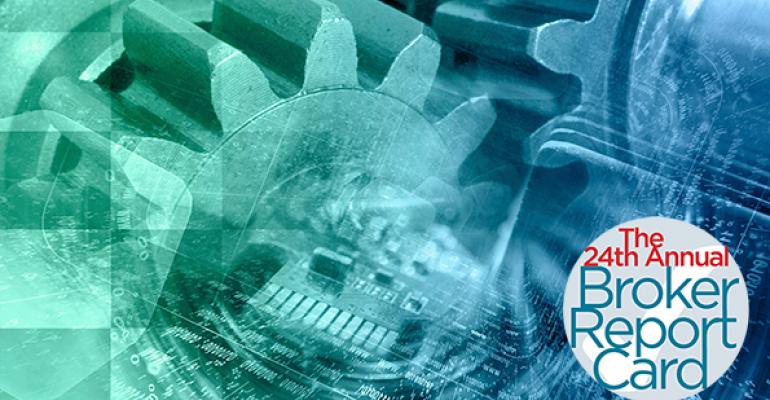 How This Survey Was Conducted: Between Sept. 24 and Oct. 31, REP. magazine emailed invitations to participate in an online survey to print and web subscribers and advisors in the Meridian-IQ database at the following firms: Edward Jones, Merrill Lynch, Morgan Stanley, Raymond James &amp; Associates, UBS and Wells Fargo Advisors. By Oct. 31, a total of 2,965 responses were received (Edward Jones: 457, Merrill Lynch: 84, Morgan Stanley: 137, Raymond James: 539, UBS: 218 and Wells Fargo Advisors: 1,437). Brokers rated their current employers on almost 50 items related to their satisfaction. Ratings are based on a 1-to-10 scale, with 10 representing the highest satisfaction level. They were also asked additional questions about their firms and industry trends, and respondents were given space to post their own opinions.

Financial advisors are known to harbor a strong streak of independence and autonomy, and aren’t shy when it comes to letting their opinions be known, both good and bad.

But they tend to be happier when the financial markets are headed in the right direction, as REP.’s 24th annual Broker Report Card shows. The annual survey lets advisors from the six major national brokerages rate their employers across a spectrum of factors, and their opinions continue to improve. This year, advisors gave the firms an average approval rating of 8.2 on a scale of one (lowest) to 10 (highest). (In a similar survey earlier this year, independent advisors gave the firms they affiliate with an average approval rating of 9.)

Still, issues like technology, burdensome red tape and pressure to sell banking services like mortgages and lines of credit are pain points for many.

Each firm has its own strengths and weaknesses. But comparatively low ratings in several categories, including technology satisfaction (7.8) and compliance (7.1), weigh down firms across the board.

At the traditional wirehouses, pressure to sell clients banking services also brought down satisfaction levels. Across all four firms, about 37 percent of advisors report they have been pressured to sell banking and/or loan products, an increase of 7 percentage points from 2013. A “holistic” advisory approach with “integrated product offerings”—think mortgages and lines of credit—may make sense from a business perspective, but some advisors see it as meddlesome, particularly when compensation is tied to the sale.

“This is a fairly autonomous group of people, and the more they feel that senior management is trying to interfere in their business, the more it’s going to drive down satisfaction,” says Bing Waldert, director of Cerulli Associates.

And while only 12 percent say these sales have hurt their business, the lower rating is more about the loss of control over the client experience. “Advisors are really afraid of negative surprises, and they don’t want anything to happen that disrupts that client relationship,” Waldert says.

At Merrill Lynch, 50 percent of the advisors who responded to the survey reported feeling pressure to sell banking services, and it ranked last among all firms with an overall satisfaction rating of 6.6, down from the 7.6 score earned just a year earlier. (It should be noted that less than 100 Merrill Lynch advisors completed the survey this year.)

Still, Merrill advisors gave the firm low scores across the board. On the matter of senior management, the firm scored 5.7 out of 10; the average across all firms was 8.1. When it comes to compensation, Merrill Lynch got a satisfaction rating of 6.6 versus the overall average of 7.9.

“Merrill Lynch management has an arrogance problem and they always have. They have the mindset of, ‘We’re the biggest name on Wall Street and you’re lucky to work here,’” says Rick Rummage, president of consulting and recruitment firm The Rummage Group.

But Taylor believes once the company firms up and broadens its focus on full-service client relationships, it’s going to be an extremely strong firm. “They have very strong bones, if you will. Right now, it’s just a very difficult time,” he says.

Morgan Stanley’s standing in the eyes of its advisors increased dramatically this year; the firm scored an overall satisfaction rating of 8.1. Last year, the firm was in last place among the six national brokerages with a score of 6.6.

“We did go through a difficult period during the integration,” says Wealth Management President Greg Fleming. “What I said at the time to many financial advisors while I was out in the branches was that we understood the challenges they were dealing with, we had a plan to systematically fix those issues over time and we would deliver on that.”

The firm scored high in technology ratings and leadership this year, areas that were low points in the past. “Fixing technology issues went a long way to making advisors more satisfied,” says Mindy Diamond, president of
Diamond Consultants.

Morgan Stanley advisors also gave senior management high marks (8.2), up from a low of 6.3 earned in 2009. “I’ve heard they are doing better in terms of communications with top reps—management appears to be engaged with them,” says Matt Lynch, principal at Tiburon Strategic Advisors.

UBS and Wells Fargo Advisors saw little to no change in their overall scores, though Waldert noted that Wells Fargo’s strategy to stay out of the news may help them in the long run. “Mary Mack has come in in a way that’s been very smart,” Taylor added, noting advisors initially thought there was going to be a bank-centric focus and a cross-sell push. If anything, some Wells Fargo advisors seem to be optimistic that Mary Mack takes their concerns to heart and may pull back on some of the compensation practices tied to banking products.

Receiving top marks again this year at 9.5, Edward Jones narrowly topped Raymond James’ 9.1 overall approval rating. But advisors at both firms rated them a full point above the highest-rated wirehouse Morgan Stanley. The reason goes beyond just culture, Waldert says, noting that both firms have made significant investments in areas that improve communications and relieve daily pressure points through things like sales assistants and branch managers; wirehouses have cut costs in these areas.

“If you look at the four major wirehouses, these are global financial services firms that are in a lot of businesses, whereas Edward Jones and Raymond James are firms whose primary business is wealth management, and that does drive the culture and experience for advisors,” Waldert says.