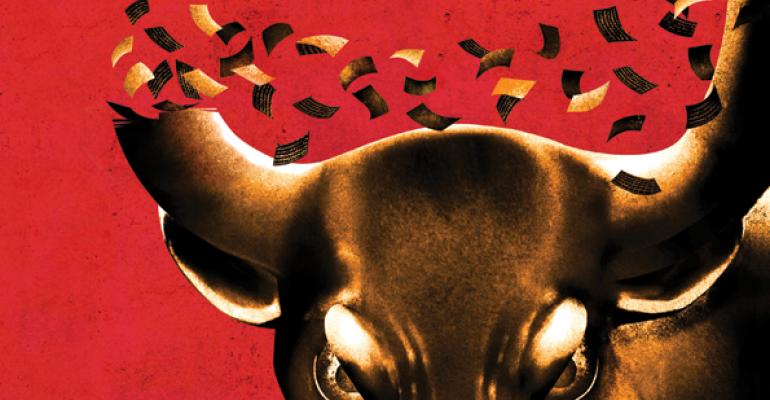 Our annual compensation survey shows advisors are riding the market rally—so what happens when it ends?

It feels a lot like 2006. The equity markets are up 30 percent since the beginning of 2012; retail investors are finally starting to put their money to work. And advisors are starting to see an increase in their pay, especially within the fee-based portion of their business, according to REP. magazine’s annual advisor compensation survey.

“If the market’s up 15 percent, that part of their book is up 15 percent, less whatever portion they have in fixed income, non-equity investments,” says Andy Tasnady, managing partner of Tasnady & Associates, a Port Washington, N.Y.-based firm that designs compensation plans for brokerage firms. “Slowly, when the market’s going up, people tend to trade more. They get more positive about it; they maybe move some of their cash back into stocks.”

Along with investors, advisors too are riding the bull market. Seventy-one percent of advisors said their total compensation grew in 2012, with about half saying it rose by more than 10 percent, according to the REP. report. Seventy percent said they are serving more clients than a year ago, and 79 percent have experienced a net increase in new dollars clients have invested with them.

FAs are even more optimistic about this year, with 59 percent expecting their compensation to grow by 10 percent or more in 2013.

“This is a survey of prosperity,” says Philip Palaveev, owner and CEO of The Ensemble Practice LLC. “The industry is doing well. Incomes are high. This is sort of the rising tide of a good market and growth in the industry.”

But how long will advisors’ euphoria last? Some analysts are calling for a market correction. Sam Stovall, chief equity strategist for S&P Capital IQ, recently said he expects the S&P 500 to peak fairly soon, followed by a pullback of 8 to 10 percent. That won’t happen overnight, however.

“We expect the topping formation, either a head-and-shoulders or double top, to develop over the coming weeks and months before the bulk of the decline materializes and accelerates,” Stovall said.

Is this as good as it gets for advisors? Although he wouldn’t speculate on where the stock market will go, Palaveev says any decline between 1 and 10 percent would likely result in a dollar-for-dollar decrease in advisor income.

“If the markets decline by more than 10 percent, most firms are no longer profitable,” Palaveev says. Anything beyond a 20 percent decline and most firms don’t have enough cash flow to operate normally, often resulting in drastic reductions in workforce.

A market correction would not be as dramatic for advisors who are fee-based, which provides a steadier revenue stream, Tasnady says. If the market plummets, their fee revenue falls, but not to zero. For more commission-based practices, however, revenue could fall by half if trading volumes dry up.

The Return of the Retail Investor

“It’s good to have fee-based compensation when the market’s are going up for sure,” says consultant Tim Welsh of Nexus Strategy in Larkspur, Calif. “All of a sudden you’ve given me a 40 percent lift to my asset base that I’m billing on, then I’m going to make a lot more money.”

The report reveals renewed interest among clients in getting back into the markets, partly fueled by firms telling them what they need to do to participate in the upside, says Scott Smith, director at Cerulli Associates. Year-to-date through April, equity mutual funds and ETFs attracted $175 billion, three times the pace of 2012, according to Strategic Insight.

“Part of it is clients are finally seeing years and years of decent performance on the board, and saying, ‘Well, maybe it’s not so risky after all,’” Smith says. “‘Now that [the market is] up 50 percent, maybe I should get back in.’”

Excluding market performance, 79 percent of advisors said clients have invested more new dollars than they have withdrawn in the past year, versus only 6 percent who said clients withdrew more than they added, according to the REP. report. The net increase in new money was even more prevalent among the regional and independent RIA firms, at 87 percent and 84 percent of advisors, respectively.

Leaving the Horse Behind

Advisors indicated that their assets under management grew an average of 16.7 percent in 2012, a 3.3 percent premium over the S&P 500. More than one-fourth of the survey respondents said their business is growing faster than 20 percent per year, outpacing the S&P.

“No doubt about it, there are advisors growing much faster than the market,” Palaveev says. He attributes the growth to advisors making investors more aware of what they can do for them. In fact, the number of clients advisors are serving increased across all channels, according to the survey.

“It’s not that they’re taking clients from each other because you have all the channels covered,” he says. “It’s just there are more people using financial advisors than the year before.

“The terms financial planning, financial planner, wealth manager, investment advisor are becoming more and more common,” he said. “Imagine you invented the car. The more people know that the car exists, the more people are likely to buy a car. But if you never had a car before, they may continue using their horse.”

It Pays to Be Independent 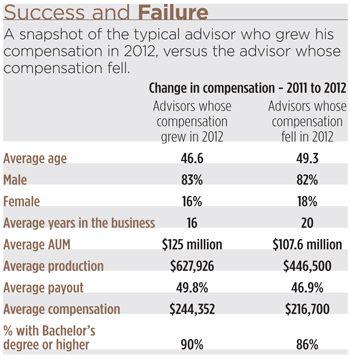 In early May, a Fidelity Investments survey found that advisors who moved to an independent model saw a greater increase in compensation than those who moved to other channels. And while the wirehouses still lead the independent brokerages by average AUM per advisor, the independents are growing at a faster pace in our survey.

When you compare the raw numbers from last year, total compensation among independent broker/dealer practices was up 27.5 percent from last year, while RIAs with a b/d affiliation saw their compensation rise 6 percent. (Note: Last year’s survey was made up of a different sample, so it may not be an apples-to-apples comparison.) 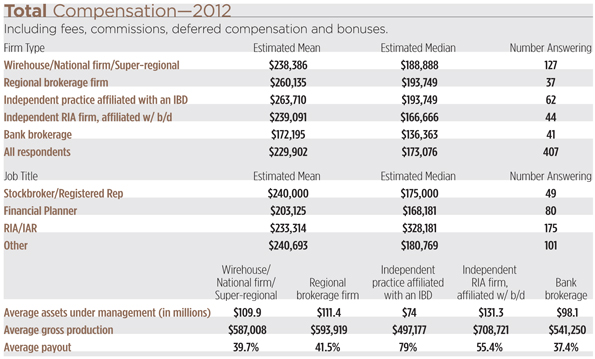 “Not by a huge margin, but the data does seem to indicate that some clients do favor independence over the wirehouses,” Palaveev says.

Why the independent bias? Independent advisors, on average, are younger and perhaps hungrier to grow, Palaveev says. In the survey, wirehouse advisors average about 48 years old, versus 45 for independent RIAs with a b/d affiliation and 47 years old for IBD advisors.

Cerulli’s Smith believes it may simply just be the nature of the type of advisor who goes independent.

“That’s the one who really cares about their business, for whom it is a love and not just a job in most cases, and that they’re really committed to growing their business,” Smith says. 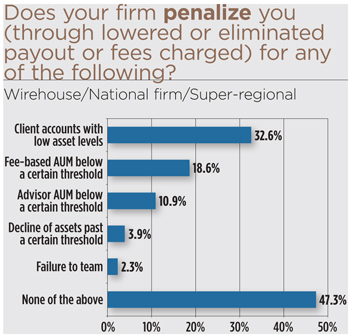 Payouts are also generally higher in the independent space because more of the profits go to the owner of the firm. Ryan Shanks, CEO and founder of Finetooth Consulting, says he’s seeing a lot of independent advisors operating efficiently, grossing 90 percent payout and spending 30 percent on the expenses of running the business.

“Those independent firms that are identifying the efficiencies, changing some of the ways they’ve been doing business, start to create potential scalability,” Shanks says. “For that population of the industry, on the captive side of the fence, they’re going to take a long hard look, and go, ‘If I just look at this from a pure percentage gain, it sure seems to me like it makes most sense for me to go with an IBD affiliation.’”