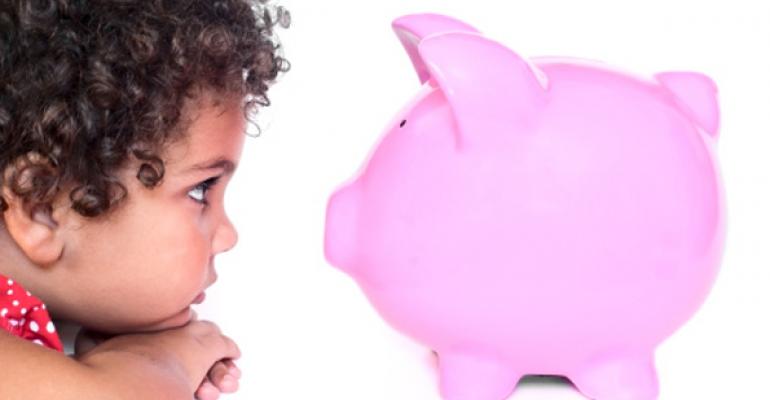 The Power of Persuasion

These small acts for clients’ children and grandchildren can make a big difference.

Many parents and grandparents want their kin to make the right money moves. But just telling the kids and grandkids to do something can be as easy as it is ineffective. Your clients can use these tools and methods of persuasion to help the younger generations save more.

The older family members can start while the kids are young enough to have a piggy bank and some math skills. They can make an arrangement with the child to have her count up how much she has saved once per year (maybe on her birthday, or the first day of the year).

They then pay her a percentage of the accumulated amount (say 5 percent or 10 percent). For instance, if she has built up $40 in her change jar, the clients could give her 10 percent of that amount ($4) each year.

This exercise will teach her not only the concept of interest, but it will also give her an incentive to save her money, instead of spending it.

Teenagers who are hard-working and lucky enough to have a job are hard to come by. But as rare as they are, clients who do have working teenagers can step in and open a Roth IRA for the teen and even make the contributions for him—although ideally the kid will kick in at least a couple of bucks on his own.

Remember that if your clients make contributions to a Roth IRA for a working child, the money is a gift to the kid, and he can technically do whatever he wants with it. But although the contribution can be withdrawn at any time with no taxes or penalties, money in a child’s name is unlikely to substantially reduce his need-based financial aid when he’s going to college.

Many parents struggle to keep their child motivated to stay in college, study hard, and graduate with a degree. One way to ensure that the kid has some proverbial skin in the game is for the parents to tell her that she has to borrow the money herself. Then if she graduates, the parents will pay off some or all of her student debt, as they see fit.

The dual perils of no degree and lots of debt might be enough to keep her in the library and out of the bars and frat parties.

Once your clients’ adult children land a job that offers an at-work retirement plan, the parents could tell their child that they’ll match a percentage of every dollar he saves into his 401(k) or 403(b).

Plus, he will get the added benefit of the reduction in taxes provided from contributing to a pre-tax retirement plan. He merely has to provide a year-end statement detailing his contributions to qualify.

Get Them Out of Debt—Once

Between student loans, credit cards, car loans, and mortgages, it’s not uncommon for un- or under-employed twenty-somethings to have more debt than they can handle, or are paying a higher interest rate than their parents would prefer.

If the clients are so inclined, they can pay off the debt the adult child has incurred, and issue a new loan to the kid for the amount. In the process, the parents could make a higher interest rate on their own money and lower the rate paid by the kid at the same time.

But there are a few steps that need to be taken. First, have the arrangement documented properly by a lawyer and the tax implications tracked by a CPA. (Do-it-yourselfers might try www.loanback.com.) And to prevent future debt, part of the agreement can include giving the parent the right to review the child’s credit report on the spot at www.annualcreditreport.com.