/sites/all/themes/penton_subtheme_wealthmanagement/images/logos/footer.png
Recent
Recent
Hybrid Work Was Supposed to Create the Best of Two Worlds. It’s Turning Out to be a Challenge for Office Tenants.
May 25, 2022
Eight Must Reads for the CRE Industry Today (May 26, 2022)
May 25, 2022
Cresset and Meristem Merge to Create $27B AUM Multifamily Office
May 25, 2022
Know the Rules: State Residency and Taxation for Individuals, Trusts, and Estates
May 25, 2022
Featured
The 10 Best and 10 Worst States in Which to Retire in 2021
Jul 15, 2021
Poll: 15 Classic Books on Investing and the Markets
Apr 03, 2020
Fifteen Must-Listen Business Podcasts for Advisors
Aug 14, 2020
Celebrity Estates: Jay Leno and Planning for Classic Car Collections
Feb 22, 2022
Viewpoints
brought to you by 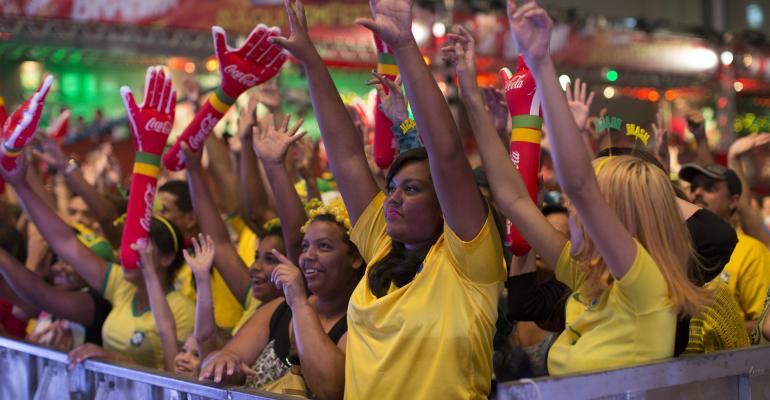 World Cup and World CPI Are Heating Up, Risking Mistakes by Key Players

Over a week into the World Cup the average number of goals scored per match is 2.92, putting the tournament on course to become the highest-scoring World Cup since 1970 in Mexico (2.97). The greater number of goals is being blamed in part on hotter weather. Unlike the cold winter weather of South Africa, site of the 2010 World Cup, which produced the second lowest scoring tournament, the matches in Brazil have seen temperatures around 80 degrees. The heat and humidity can result in players getting fatigued more quickly and making mistakes. This may lead to a rising trend in average goals scored in the years ahead with Russia hosting the World Cup in 2018 (including a stadium in Sochi where it was too hot for the Winter Olympics and which is typically in the 80s at this time of year) and Qatar hosting in 2022, where the high temperature in Doha gets into the 100s this time of year.

Just as the World Cup has been heating up, increasing the risk of player mistakes, the world consumer price index (CPI) has also been heating up, complicating the task for policymakers at the world’s central banks and increasing the risk of mistakes that could have market implications. World CPI has tracked the average number of goals scored at the World Cup [Figure 1] and both may be headed higher.

The conflict in Iraq is contributing to the rise in inflation through higher oil prices. Oil prices are at nine-month highs, rising above $107 a barrel on Friday, as the threat increased of a material supply disruption due to the rapid advance of militants in Iraq, the second-largest OPEC oil producer. We see a major disruption as unlikely given where the conflict is concentrated and the distribution of oil production in Iraq. Nevertheless, prices may remain elevated and creep toward the $113 per barrel seen in 2011, when the Libyan conflict negatively impacted global oil supply.

The world’s major central banks, including the Federal Reserve (Fed), European Central Bank (ECB), Bank of England (BoE), and Bank of Japan (BoJ), are nearing critical turning points in policy for the first time since the global financial crisis. Similar to World Cup players, the risk of policymakers making mistakes rises as inflation heats up.

The BoE is more likely to diverge from the global trend and raise interest rates in the coming months as inflation rises. In the United Kingdom, the final revision to first quarter gross domestic product (GDP) will be reported this week. At 3.1%, the economy is growing at the strongest pace since 2007, before the global financial crisis. The BoE could become the first major central bank to raise interest rates since the crisis. Markets have been pricing in a 0.25% rate hike by year end. However, rising inflation could prompt a more aggressive path for rates and risk a decline in the market with participants concerned about the pace of reversing the stimulus.

Higher inflation may reduce the likelihood of more ECB stimulus in the short term. Europe has a renewed focus on restoring economic momentum and avoiding deflation, and the ECB took action to cut deposit rates below zero in June. Data this week on sentiment readings and manufacturing in June will give market participants better insight into the pace of growth. A rise in the rate of inflation would be welcomed, but if it is only due to higher oil prices, it only darkens the growth picture and may limit the ECB’s flexibility to provide further stimulus.

The BoJ may be less likely to extend or increase the current stimulus program despite the economic slowdown. Market participants have been expecting some additional stimulus from the BoJ in the coming months. Both internal and external demand has slowed in Japan. The spring sales tax increase has slowed domestic spending sharply and, at the same time, Japan's exports fell on a year-over-year basis in May for the first time in 15 months. Higher oil prices add further pressure to an economy that has already been experiencing high single-digit energy price increases over the past year, helping the CPI jump to 3.4% in April, well above the 2% target rate.

Market participants may begin to anticipate the Fed will need to hikes rates sooner than previously thought. The CPI is up 2.1% over the past year in the Untied States and a further oil-driven boost to inflation may suggest the Fed is getting behind the curve. This may prompt some market participants to believe that the Fed may have to move sooner to raise interest rates.

This week we will get inflation data in the United States, Germany, and Japan along with further developments in Iraq. Inflation has not been a risk for policymakers for many years, but the heat may be rising.

Gross Domestic Product (GDP) is the monetary value of all the finished goods and services produced within a country’s borders in a specific time period, though GDP is usually calculated on an annual basis. It includes all of private and public consumption, government outlays, investments and exports less imports that occur within a defined territory.

Jeffrey is Chief Market Strategist and Executive Vice President at LPL Financial. In this role, he leads the development and articulation of LPL Financial Research market and investment strategies.