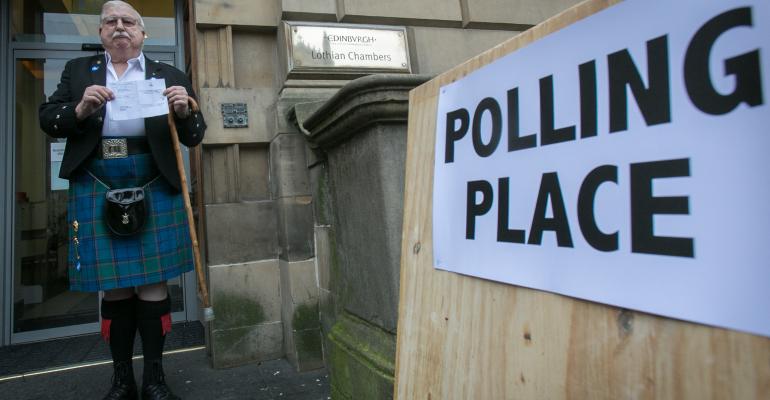 Will Today's Scottish Vote on Independence Be the 'Black Swan' to Financial Markets?

I wonder if the issue of an independent Scotland would actually be something of a black swan for the U.S. and world financial markets? According to Reuters, the international news agency, investors this past month, August 2014, have pulled approximately $27 billion out of UK financial assets. This is the biggest capital outflow since the Lehman crisis in 2008. Concern has continued to grow about the economic and financial fallout if Scotland secedes from the United Kingdom. Even Morgan Stanley said that the daily equity flow data pointed to "some of the largest UK equity selling on record." The Independent, a UK news outlet reported that “Britain’s banks have been quietly moving millions of banknotes north of the border to cope with any demand by the Scots to withdraw cash in the event of a “YES” vote.

Billionaire George Soros added another interesting perspective saying, "This would be the worst possible time for Scottish independence." His reasoning is that there is a resurgence of nationalism around the world and it's on a rise not just within Europe and Scotland, it's everywhere. He believes that since World War II, the U.S. and Europe have been the main advocates of the prevailing international political and economic order. But in the last five years, both the U.S. and Europe's economic weakness (due to heavy debt and the lack of ability to pay the debt) has created this vacuum that ambitious regional powers have sought to fill, including Scotland.

This collapse of international governance has given rise to a plethora of unresolved political and economic issues around the globe. We've seen them. There's been Ukraine. There's Iraq. There's Syria. There's terrorism. How about the terrorist group ISIS? All of which could cause a tremendous amount of human suffering worldwide. Even China has its own worries about a possible Scottish black swan as its own independence movements with Tibet and the province of Xinjiang are issues for them. They believe any step anywhere in the world towards separatism can catalyze a chain reaction. This could be the reason they recently implemented a quantitative easing program two days before the referendum to ease the pain of possible independence movements. All this made me wonder if the Scots say “YES” to the referendum vote on this Thursday, Sept. 18, 2014, will this event be the long-awaited black swan of the U.S. and world markets? A black swan describes a high-risk destabilizing event unforeseen by most people. A “Yes” vote for independence in Scotland's referendum on Thursday could prove to be a perfect moment for what I call the “Scottish black swan” to appear.

I believe the country of Scotland could pose a systemic market risk to the world financial markets, in particular, to an already weakened U.S. economy. The Federal Reserve is the only support of the U.S. stock market right now. Former UK Prime Minister Gordon Brown even called this Scotland's "moment of destiny," and that has both negative and positive implications. The rest of us familiar with the U.S. economic fragilities, see the Scots' referendum as a highlight of extreme financial risk and complexities.

Even BNP Bank said, "What seems certain is that in the immediate aftermath of a yes vote, world financial markets will be rattled." What does this mean to investors? Not only will they be rattled after a yes vote, but the cat will be out of the bag even on a no vote, because they're not going to stop there. If they decide to vote no, they'll bring this vote up again. Eventually, there will be a yes.

Until now, the Scottish independence referendum has flown under the radar in the United States except from anyone of Scottish descent. 2014 for the U.S. markets has brought significant volatility and high levels of risk driven and passed by a highly weakened economic environment. The geopolitical issues seem to be escalating around the world. Add to this the prospect of this Scottish economy being set adrift or cut apart from the UK currency, the Pound, and U.S. investors have every reason to fear the U.S. markets will have turbulence.

We don't believe we will get any more relief from additional Federal Reserve funding to bail out the U.S. As of today, even if they did try another cash infusion, it's become ineffective, which is painful for the majority of Americans. Ninety percent feel there has been no recovery since the last recession of 2008, and the Federal Reserve knows this. Every three years, the Federal Reserve releases a survey regarding U.S. consumer finances; it's an accumulation of data on everything from household net worth to American income.

The 2013 survey just came out and it confirmed that the majority of Americans feel left behind, yet media headlines still continue to beat the positive drums saying, "everything is in recovery. You should feel good about what's going on." But we don’t!

Here's an excerpt from the brief the Fed just recently released and it's going to give investors an idea about their real concerns, not what the media's telling them. It's the real concerns of the Federal Reserve. They wrote, "while the ongoing interventions by the Federal Reserve have certainly boosted asset prices higher, the only real accomplishment has been a widening of the wealth gap between the top 10 percent of individuals that have dollars invested in the financial markets and everyone else. What monetary interventions have failed to accomplish is an increase in production to foster higher levels of economic activity." Then they continued by saying, "With the average American still living well beyond their means, the reality is that economic growth remained mired at lower levels as savings continue to be diverted from productive investment into debt service. The issue, of course, is not just a central theme here in the United States but to the global economy as well."

So, after five years of excessive monetary interventions, what they're saying is that the U.S. debt levels have yet to be resolved while at the same time the U.S. media continues to tell investors that the economy's on the mend. Even the Federal Reserve knows it isn't the truth.

All market data references are sourced to Bloomberg terminal database.