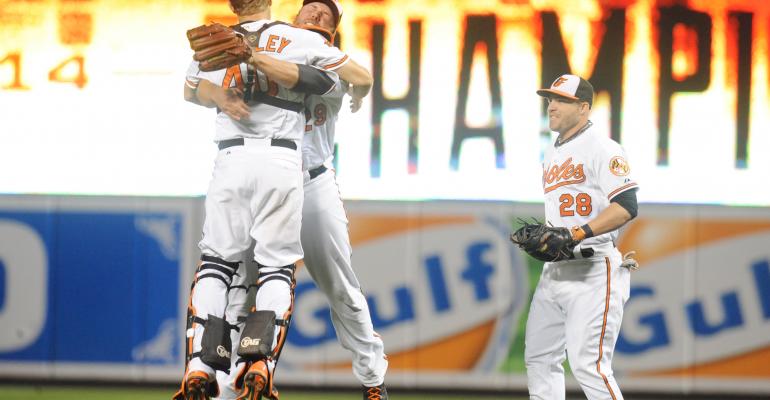 <p>BALTIMORE, MD: Nick Hundley #40 (L), Tommy Hunter #29 (C) and Steve Pearce #28 (R) of the Baltimore Orioles celebrate on the field after the Orioles clinch the American League East Division during a baseball game against the Toronto Blue Jays on September 16, 2014 at Oriole Park at Camden Yards in Baltimore, Maryland.</p>
Investment

Why the Pennant Race Could Coincide with Market Volatility

While the U.S. economy is gaining momentum, investors should nevertheless brace for volatility in the next few weeks.

For baseball fans, it is hard to beat this time of year. The pennant race is hot and the excitement of the playoffs will soon be upon us. For investors, the time between now and the Fall Classic could be equally action-packed. There is the battle between doves and hawks at the Federal Open Market Committee, and what I believe will be a near-term period of volatility before we cross into seasonal strength that generally coincides with, you guessed it, the start of the World Series.

On Wednesday, dovish Fed policymakers opted not to grant concessions to the hawks or indicate a willingness to modestly increase rates sooner than the market had previously anticipated. That decision was reflected in the FOMC's statement that rates would stay near zero for a “considerable time” after quantitative easing ends, and came after weaker-than-expected inflation data and the central bank lowering its GDP forecast for 2015.

In her post FOMC press conference, Fed Chair Janet Yellen went to great pains to express the committee’s concern for the plight of the unemployed, for whom she displayed great empathy. On more than one occasion, Dr. Yellen commented that, based on the Fed’s own projection for unemployment by the end of 2015, the U.S. economy would still not have reached full employment by that time. Comments such as these soothed the market despite the fact that the Fed’s own projection for interest rates – signaled in the so-called “dots” – forecast the federal funds rate at 1.375 percent by the end of 2015, 25 basis points higher than its June forecast of 1.125 percent. Reconciling these seemingly conflicting messages is the challenge for market participants in the coming year.

The debate between the hawks and the doves has not yet reached its conclusion, and still, the U.S. economic recovery seems to be gaining momentum. Economic data, after a lull in July, has shown solid gains and we expect third-quarter U.S. GDP to be about 3.2 percent. Both small-business optimism and the Thomson Reuters/University of Michigan consumer confidence survey are climbing toward post-recession peaks. The net monthly change in U.S. credit has finally stabilized. Now, credit card debt is no longer shrinking, but instead is consistently expanding, along with loans for big-ticket items such as automobiles and appliances.

The bottom line is things are looking pretty good, but while financial markets are in encouraging shape longer term, now is often the worst time of year for markets. Indeed, October is remembered for the stock market crashes of 1929 and 1987, and the 2008 financial meltdown. The buy signal for the S&P 500 traditionally coincides with the first game of the World Series, so we may have to wait to relax, at least until October 21, when the Fall Classic is scheduled to begin. Until then, investors will likely go through some periods of higher volatility.

Contrary to the Federal Reserve’s forecast in its “dots,” a labor market conditions index from the Federal Reserve Bank of Kansas City suggests the timing of the Fed’s first rate hike should be no earlier than late 2015, or possibly even 2016. The index, cited by Yellen in her recent Jackson Hole speech, uses 19 labor market indicators to measure overall job market conditions. In the prior two rate hike cycles, the index was positive before the Fed began raising rates. The underutilization in the labor market, combined with recent inflation softness, suggests the Fed should maintain the current level of policy rate for a considerable period of time.

Source: Federal Reserve, Bloomberg, Guggenheim Investments. Data as of 9/17/2014. *Note: Projection is made by using the average monthly change in the index since the beginning of this year.