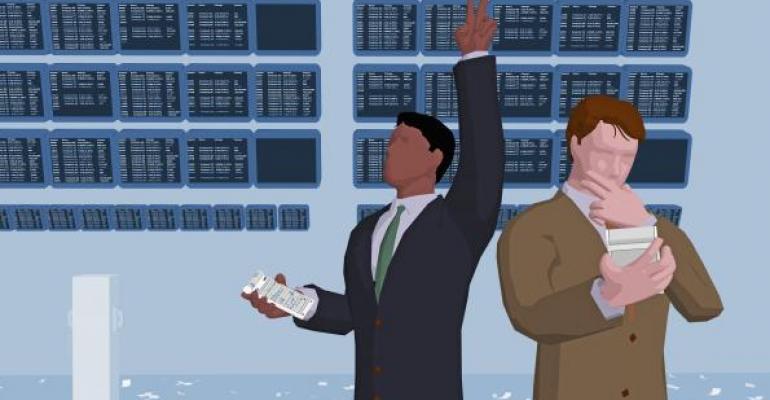 The Week That Was: The Straw That Broke the Camel's Back

The idiom describes the cumulative effect of seemingly minor actions that eventually cause a sudden reaction of outsize proportion.

The idiom “the straw that broke the camel's back” describes the cumulative effect of seemingly minor actions that eventually cause a sudden reaction of outsize proportion. The metaphorical contrast of the light straw against the strength of the camel is meant to relay that even the strongest will capitulate under enough pressure. Much like the camel, the markets this week finally bowed to a combination of data and macro “straws.”

After weeks of both weaker data and macro issues largely being ignored, the combination of retaliatory sanctions and continued economic weakness in Europe finally took its toll. Equities suffered their biggest drop in two months as U.S. stocks erased $320 billion in market value. The first of the “straws” was the Euro area PMI reading for August, which missed estimates, coming in at 50.5 vs. 50.6; the lowest reading since August 2013. Perhaps more troubling was the drop in the German data, which fell to 50.3 from 51.4.

However, the straws that took the biggest tolls involved retaliatory threats by the Russians. The Moscow Times reported that Russian courts could get the green light to seize foreign assets on Russian territory under a draft law intended as a response to Western sanctions over Ukraine. The tipping point occurred when Russian Energy Minister Alexander Novak threatened gas supply disruptions if the EU continues to re-export Russian gas to Ukraine. The combination of the weaker data and the heightened rhetoric proved to be too much, causing risk assets to plunge on Thursday.

As the markets moved lower volatility increased, however, the increase was largely of an orderly nature. The 18% increase in the Chicago Board Options Exchange Volatility Index sent the measure to 15.64 on Thursday. For context this reading was below its peak level of 17 that we’ve seen during every major drop since 2012. The move lower was by no means a “panic” move, and was likely exacerbated by low volumes tied to mid-week holidays.

U.S. rates fell by as much as 7 basis points as the 10-year hit a low of 2.48% before pushing back above 2.51% on Friday. I had highlighted the 2.50% level last week as a resistance point and the initial push into this level was met with selling. Technically, yields could still push lower we are likely to retest 2.50% level in the next few weeks. In framing the 10-year the range looks to be 2.45% to 2.60% with overhead resistance beginning in the 2.54% area.

The curve finished on Friday with most relationships flattening tied to the flight to quality. The spread between 2-year and 10-year Treasuries dropped by 5 basis points, finishing the week at 194 basis points. The 204/205 level that I had highlighted did in fact mark the recent high pivot in the relationship. I believe the curve will continue to flatten and that we could see a test of 190 basis points in the 2s/10s relationship in the next few weeks.

This week was an excellent reminder that the multitude of issues facing the market can and will eventually take their toll. This week’s move seems to have been more of a warning, but one that clearly needs to be heeded. As I have highlighted before, the swings that we are seeing in the market are getting larger as the market contends with mispriced risk and fewer risk takers. The incremental nature of each increase in risk is slowly building and much like the camel will push things to the tipping point. Chasing returns without respect for the “load” or risk will leave you with the same fate as the camel- having pushed too far.

Sean Fallon, CFA, is Senior Vice President of Stephens Inc. He joined Stephens in July 2012 to head the Municipal Taxable efforts and to trade CMBS, Agency CMBS, and ABS. He has 19 years of experience managing and trading fixed income assets.