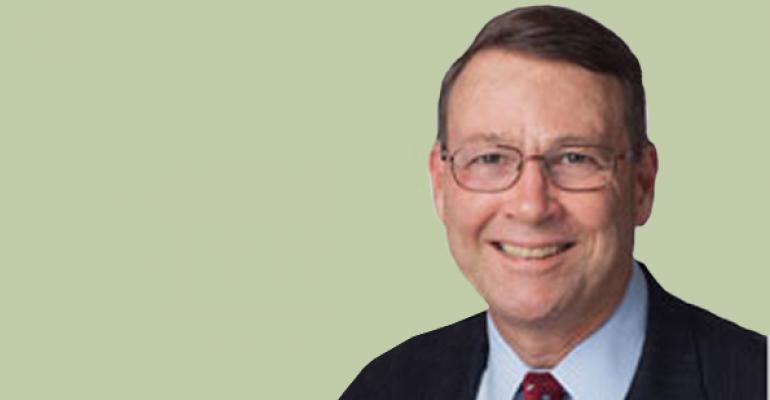 Concerns surrounding the pace of Chinese growth, the impact of reduced quantitative-easing stimulus and the health of corporate earnings culminated in a sudden shift of investor sentiment last week. SEI is maintaining its favorable view of emerging equities, as we believe catalysts will materialize that should improve the outlook for the asset class. While emerging and developed equities have struggled out of the gate in 2014, we do not believe the elements of a more serious equity bear market are in place. &nbsp;

Following what was a steady climb in 2013, global equity markets have finally hit a modest rough patch. Concerns surrounding the pace of Chinese growth, the impact of reduced quantitative-easing (QE) stimulus from the Federal Reserve (Fed) and the health of corporate earnings culminated in a sudden shift of investor optimism last week. Global stock markets declined more than 2% in the week. Year-to-date results are down nearly 3% with emerging markets (EM) stocks leading the decline, falling over 5% since the beginning of the year. While watching the numbers drop is unsettling, none of this comes as a surprise. Pullbacks are a normal and expected part of market movements.

Within our active asset allocation program, SEI initiated an overweight toward EM equities in the second-half of 2013, as valuations appeared to reflect many of the fundamental problems plaguing developing countries—poor economic fundamentals, worries over excessive government and/or private debt levels (China, Turkey and Brazil), and fears of a reduction in the Fed’s stimulus efforts (tapering of quantitative easing)..

Although the recent volatility runs against our expectations that we would see some stabilization of performance versus developed markets owing to the wide valuation gap, we are maintaining our overweight to EM equities. Our logic is based on anticipation of a rebound as governments of developing economies raise rates to stem capital outflows and push through reforms to stabilize their economies.

We recognize that a number of factors are currently tempering investors’ views of the asset class, including the ramifications of higher yields in the U.S. from the Fed‘s bond-purchase tapering, China’s rising debt and its impact on economic growth, and political uncertainty, as well as social unrest, in many regions. However, we also note that sentiment can often overshoot to the downside, at times leading to valuation anomalies and presenting opportunities for active managers.

Merrill Lynch’s latest Fund Manager Survey shows a strongly negative position against emerging markets versus developed, even though global growth expectations are close to the previous highs in 2007. Investors are also ignoring the fact that EM economies continue to produce more positive economic surprises than developed-market (DM) economies. Exhibit 1 illustrates the major divergence between relative EM and DM economic surprises and the relative performance of EM and DM equities. 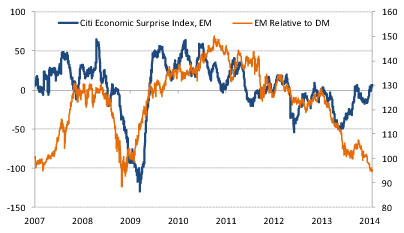 SEI believes catalysts will materialize that should improve the outlook for the asset class. Accordingly, we continue to view EM equities favorably. Potential catalysts include an acceleration of global economic growth, a successful conclusion to the Transpacific Partnership (a new trade agreement between the U.S., Canada, Australia, Japan and key Asian countries), an easing of the Chinese debt problem, and economic reforms in some of the larger EM countries, including China, India and Brazil. Longer term, we believe the asset class remains positioned to perform well. Emerging economies should continue to post faster growth relative to advanced economies as trade flows recover. They also should benefit from the expansion of an increasingly affluent middle class, and enjoy generally positive demographic profiles. For now, emotional, indiscriminate selling seems to be ruling the day when it comes to EM stocks, bonds and currencies.

Within emerging-market debt, market pressures have driven yield spreads wider, to approximately 342 basis points (for U.S. dollar-denominated debt) from a little over 300 basis points at year end. Despite the market movement, issuance has been strong year-to-date and generally oversubscribed, despite reported asset-class outflows by retail investors. Yields for U.S. dollar- denominated debt are in the 6% range.

We remain neutral relative to our strategic target weights on EM debt given the shift in sentiment in recent weeks, which could create more downside risk despite the fairly attractive valuations. Political and economic events across all regions have reignited concerns that could weigh on the asset class in the near term. The 2014 election calendar is busy for many nations, which historically has been associated with increased price gyrations.

While the negative momentum in EM assets has been in place since mid-2011, the correction in developed market stocks is something we haven’t seen for awhile. In our latest quarterly outlook, we noted the extreme bullishness exhibited by investors at the close of 2013. This does not mean that a bear market is around the corner, but the extreme bullishness does indicate a certain vulnerability to negative surprises.

The market may very well be in a period where investors are resetting their expectations, given heightened near- term volatility. In our view, however, we do not believe the elements of a more serious equity bear market are in place. The most important drivers of stock-market performance in our framework are still flashing neutral-to-positive signals.

First, despite the taper, the Fed is maintaining its easy monetary policy—a near-zero interest-rate target and continued quantitative easing. It is our belief that the Fed will keep short-term interest rates well-anchored into 2015, if not beyond. The yield curve (Exhibit 2) should therefore stay steeply upward sloping. Bear markets usually begin when the yield curve flattens and inverts, since an inverted yield curve is a sign of tight liquidity and impending economic recession. At the moment, any flattening in the yield curve reflects a risk-off move by investors, not a tightening by the central bank. 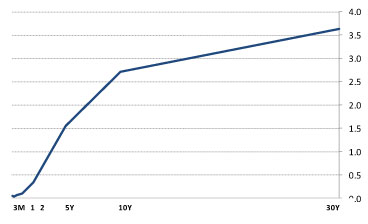 In addition, we believe global economic growth is more likely to accelerate than decline. Forecasts for growth are being revised higher, even for beleaguered EM economies. The International Monetary Fund recently raised its forecast of global gross domestic product (GDP) growth to 3.7% in 2014, which compares favorably to 3.0% in 2013. Even emerging economies are expected to enjoy an acceleration of business activity, with GDP rising 5.1% versus 4.7% in 2013. While there are risks to the outlook, it’s more a matter of growth staying sluggish than the world economy falling into another recession.

Finally, despite the robust gains across global stock markets, valuations remain reasonable. While valuations have risen more in developed markets, they are far from nosebleed levels. The U.S. is among the more expensive stock markets in the world today, but even here, price/earnings ratios and other metrics of value appear well within historical norms, especially against the backdrop of very low interest rates, a still-expansionary monetary policy and further improvement in economic fundamentals. In this environment, we are comfortable with the emerging market allocations in our strategies.

The MSCI Total Return Indices measure the price performance of markets with the income from constituent dividend payments. The MSCI Daily Total Return (DTR) Methodology reinvests an index constituent’s dividends at the close of trading on the day the security is quoted ex-dividend (the ex-date).

This material represents an assessment of the market environment at a specific point in time and is not intended to be a forecast of future events, or a guarantee of future results. This information should not be relied upon by the reader as research or investment advice regarding the Funds or any stock in particular, nor should it be construed as a recommendation to purchase or sell a security, including futures contracts. There is no assurance as of the date of this material that the securities mentioned remain in or out of SEI Funds.

There are risks involved with investing, including loss of principal. Current and future portfolio holdings are subject to risks as well. International investments may involve risk of capital loss from unfavorable fluctuation in currency values, from differences in generally accepted accounting principles or from economic or political instability in other nations. Emerging markets involve heightened risks related to the same factors as well as increased volatility and lower trading volume.

Diversification may not protect against market risk. There is no assurance the objectives discussed will be met. Past performance does not guarantee future results.  Index returns are for illustrative purposes only and do not represent actual portfolio performance. Index returns do not reflect any management fees, transaction costs or expenses. One cannot invest directly in an index.