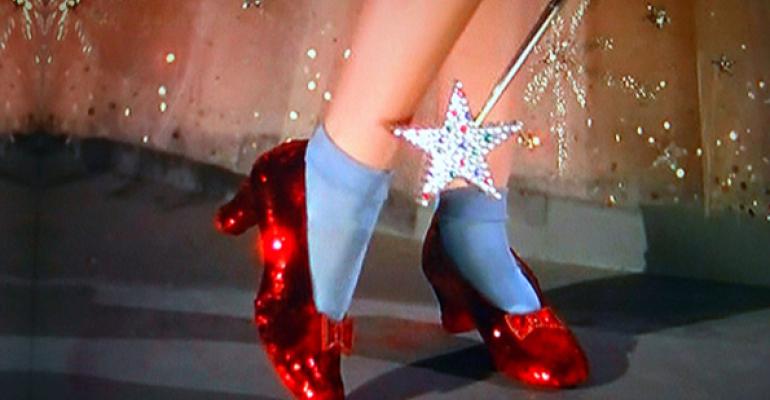 Passive investors should beware because Dorothy might look at the stock picking and asset allocation world and tell Toto, “I have a feeling we’re not in Kansas anymore.”

The Comic-Con convention comes to Seattle every year. The city teams with 15 to 45-year-old folks who love to emulate their favorite comic and movie characters. We have joked lately that we should hire a young woman to dress up like Dorothy from the Wizard of Oz and come with us when we speak in public. We’d have her click her ruby red heals together and say, “There is no place like home!”

Let me explain why, through the eyes of Smead Capital, we think there’s no place like home. First, the story inside our borders is dramatically better than the negative nabobs present it. Our nation’s economy has been cleansed politically by regulators and in the court of public opinion. Our open system of media and politics can look really ugly sometimes (think House of Cards), but our urge to air our dirty laundry purges economic sins faster than less open systems.

Banks may be “damned” by investors, but they are in the best shape they’ve been in from a lending and capitalization standpoint in the last 50 years. Their stocks trade at big discounts to the S&P both on a book-value basis and to First Call consensus 2014 earnings estimates. Investors are scared that conventional ways of banking like taking deposits and making loans to businesses and households won’t be as profitable as it has been in the past. Bank of America (BAC) is our poster child in this category. We can’t wait for the next few years to come, because we think loan rates will go up much faster than deposit rates. Think of how your gas station interacts with oil prices; they are slow to lower the gas price when oil goes down, but quick to raise it when oil prices go up.

Households are the farthest inside their means they’ve been in 34 years, as measured by the Fed’s household Debt Service Ratio (DSR). In every situation since 1980, the economy has seen very above-average growth rates as the household debt service ratio has reverted to the mean from low levels. Today’s level at 9.94 is effectively a depression like number in relation to the deep recession of 1980-82 in the 10.50 area. The U.S. economy grew by 5% or more in the mid-1980’s despite very high interest rates as the DSR mean reverted. With the DSR so low, companies that meet our eight proprietary criteria such as eBay (EBAY), Cabela’s (CAB) and Nordstrom (JWN) have big leverage on a middle-class comeback.

Lastly, an enormous group of echo-boomers are going to marry, have kids and create an explosion of economic activity. The macro-economic multiplier effect could be explosive and most money management firms are long a weak economy and short a strong one.

Remember, the last time we had immensely positive demographics and low DSR, we saw a period of economic prosperity from 1985-1999. Wedding showers and baby showers could become the national pastime of the US or, if my summer is any indication, they might have become it already. Three of my five nephews got married in the last four months; their ages are 27, 32 and 36. As we’ve mentioned before, just watch Prince William and the Duchess of York. They have one child and she is pregnant with number two. What would it mean to economic growth in the developed world if a baby boom broke out?

Contrast these positives with a list of scary activity outside our borders. Putin and Russia seem set on acquiring more territory and population. China remains unwilling to allow its press or people to be forthright with news or opinion. Just recently, it showed its stubbornness when they required the real-name registration of instant messaging tools for anyone publishing or reprinting political news. For business in China, this was one of the few ways to get the word out, and now it is being pulled.

If Russia and China don’t scare you, the ripples in the Middle East from Iraq, Israel and Afghanistan should make you nervous about sending your money around the globe. However, the chart below shows that this contrast is not being played out in the fund flows among U.S. mutual fund investors:

As true-blue contrarians, we believe that the domestic U.S. economy, the U.S. consumer and common stocks which are leveraged to them will outperform. To us this calls for Berkshire Hathaway (BRKB) and NVR (NVR). Every stock we’ve mentioned has leverage to a better U.S. economy.

We expect to gain a competitive advantage over the S&P 500 and Russell 1000 Value indexes from the contrast we just described, because our percentage of revenue outside the U.S. (around 25%) is well below the non-US revenue in the S&P 500 Index (around 45%). Passive investors should beware because Dorothy might look at the stock picking and asset allocation world and tell Toto, “I have a feeling we’re not in Kansas anymore.” Only lonely investors have their common stock investments in Kansas or America today, and as we like to say at Smead Capital, “Only the lonely can play.”

Bill Smead is the founder of Smead Capital Management, where he oversees all activities of the firm. As CIO, he is responsible for all investment and portfolio decisions as well as reviewing the implementation of those decisions in the firm’s separate accounts and the Smead Value Fund.