https://www.wealthmanagement.com/sites/wealthmanagement.com/files/logos/Wealth-Management-Logo-white.png
Recent
Recent
Nine Must Reads for CRE Investors Today (Jan. 27, 2022)
Jan 26, 2023
Lacking Property Sales Data, Appraisers Look to Other Marketplace Drivers to Value Assets
Jan 26, 2023
The Healthy Advisor: Beating the Odds and a Fresh Perspective on Life With Robert Steinberg
Jan 26, 2023
The Price Is Right for Morgan Stanley Bankers’ WhatsApp Lapses
Jan 26, 2023
Blackstone Gets Extra $500 Million From University of California
Jan 26, 2023
Featured
The 10 Biggest Tax Crooks of 2022
Jan 23, 2023
The 12 Best Business Books of 2022 for Advisors
Nov 23, 2022
The Most-Revealing Onboarding Questions Advisors Ask
Jan 09, 2023
How Well Do You Remember 2019?
Jan 03, 2023
Viewpoints
brought to you by
Investment

Summer Charts: Of Black Swans and Other Creatures

"Summer Charts" is a series of current financial topics explained in dots, lines and only a few words - just the right "mix" to concisely convey ideas for critical thinking about economic topics and investing.

Given unprecedented equity levels, paired with an only "OK" economy, critical observers of financial markets are looking (if not waiting) for the next proverbial shoe to drop. The risk giving basis to an increase in volatility and a potential market correction may be far from our borders, yet it is intimately connected to the U.S. debt position.

Over the past five years, the U.S. has increased government debt through the issuance of U.S Treasury securities by $4.47 trillion, to a total of $19.26 trillion. Regarding the financing side of this development (e.g., who "consumes" the debt issued), contrary to common belief, the U.S. Federal Government is the largest investor in Treasurys through its intra-governmental holdings (including Social Security and nearly 230 other federal agencies). Second in position are international governments, with China leading the league table at $1.24 trillion, or about 6.4 percent of all Treasury securities outstanding.

Taking another angle of domestic affairs, one political agenda over the past years has been a call for China to allow its currency, the Chinese renminbi (CNY), to freely "float" (i.e., the value of CNY to be determined solely via markets), mainly to address perceived disadvantages of the U.S. economy (manufacturing) related to a relatively stronger U.S. dollar (USD). At present, China manages the value of the CNY against a basket of other major currencies, allowing it to float in a predetermined band.

To effectively manage a floating currency band, a given nation (here, China) has to "recycle" foreign reserves into other currencies, commonly expressed through the purchase of government obligations. With China's need to increasingly spend more money to satisfy the float, a potentially unsustainable position is forming, constituting the risk for the CNY float to be abandoned.

Related: The political agenda to force China to increase the value of the CNY by allowing the currency to freely float is ill-informed, since, by definition, the market will set the direction; the CNY, as a consequence, could trade down, rather than up (as expected), vs. the USD. 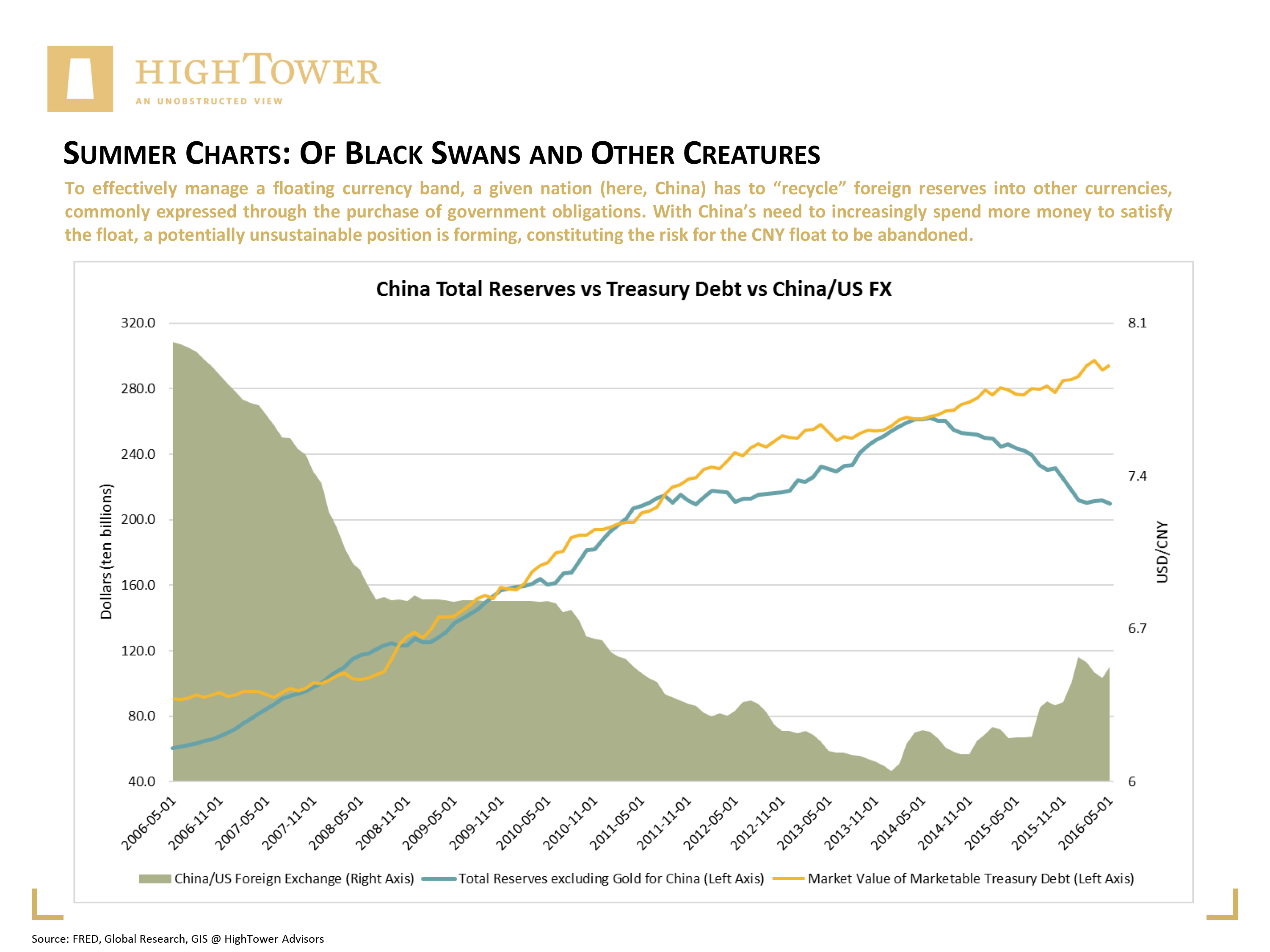 Matthias Paul Kuhlmey is a Partner and Head of Global Investment Solutions (GIS) at HighTower Advisors. He serves as wealth manager to high net worth and ultra high net worth individuals, family offices and institutions.