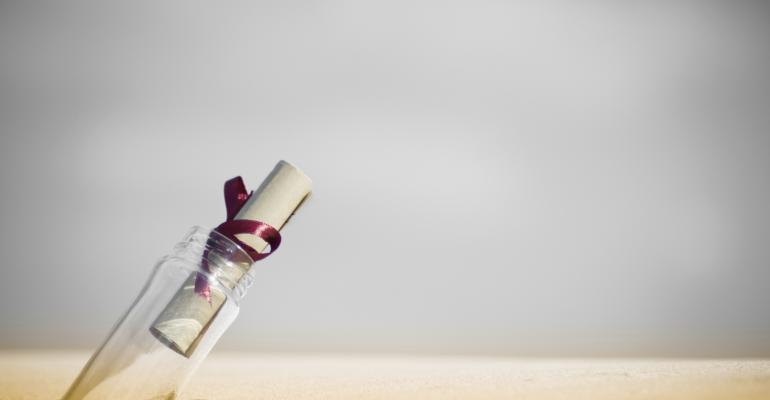 Message in a Bottle

It is important to keep in mind that, in the absence of clarity, investors can adhere to a manifest of principles in their process

“A year has passed, since I wrote my note” - just the right lyrics by old rockers, The Police, to appropriately greet 2015. Whereas we are not here to police, it remains our responsibility to stay critical of previously written content and notes. In case readers missed our September entry, The Bear Of 2015 (potentially due to giddiness over market momentum), it seems we had the precious fortune of foresight. The bottom line: it remains a risk to become too entrenched in a lopsided (U.S.) equity story, as the likelihood for global contagion, especially related to developments in Europe, is significant.

In 2011, a sovereign funding crisis of select European countries heavily impacted the global financial system, with a resulting sharp increase in volatility and subsequent market sell-offs. Even though stress in sovereign bond markets has eased substantially compared to conditions of some years ago, the European story continues to echo the shadows of the past: sub-par economic growth, a devastated labor market, as well as political and fiscal gridlock. In our view, commonly stated claims that the European Central Bank (ECB) can endure the next wave of deflationary pressures are way too casual. Not only is the application of quantitative easing considered a violation of European treaties, but also, and more importantly, the shared value system of the European model is difficult to align across diverging national interests.

For better perspective, the historic roots of an economically united Europe were based on a very different plan. In 1950, Robert Schuman (not the composer, but the French Foreign Minister) became the promoter of a united Europe by announcing plans of the formation of the European Coal and Steel Community, which became the foundation for the European Union (EU) and later the European Monetary Union (EMU). On the surface, Schuman’s objective was to establish a common value system, but part of his hidden agenda was to create an environment for European countries to never again be at war with their neighbors. German Chancellor Konrad Adenauer, recognized as the first statesmen to have reconciled the relationship between France and Germany after World War II, subsequently bought into Schuman's plan.

Regrettably, it appears that EU policymakers continue to address the current crisis on the basis of hidden agendas, with most Nordic-European nations (predominantly Germany) on one side of the spectrum, and the southern nations on the other side: a clearly divided union at its very core. Therefore, it should not come as a surprise that the current discussion around the so-called “Grexit” (i.e., Greece leaving the EMU) has once again sparked unrest in markets. In question remains an apparent and new(!) position of Germany that the Grexit may now be a possibility - likely an overplayed hand by the Germans. Of the estimated 321 billion Euro of Greek sovereign debt, about 20 percent would directly affect Germany in case of a default, not to mention the threat to an already bruised geopolitical setup in Europe and its periphery.

The song "Message in a Bottle" describes the distressed attempt by a castaway to be heard, and is recognized for his despair. A very good reminder, especially considering the blank slate of a new investing year, that the repercussions of the global deleveraging cycle are still not a thing of the past, and that critical market observers continue to be “stranded” rather than engaged.  It is important to keep in mind that, in the absence of clarity, investors can adhere to a manifest of principles in their process. Points for consideration: