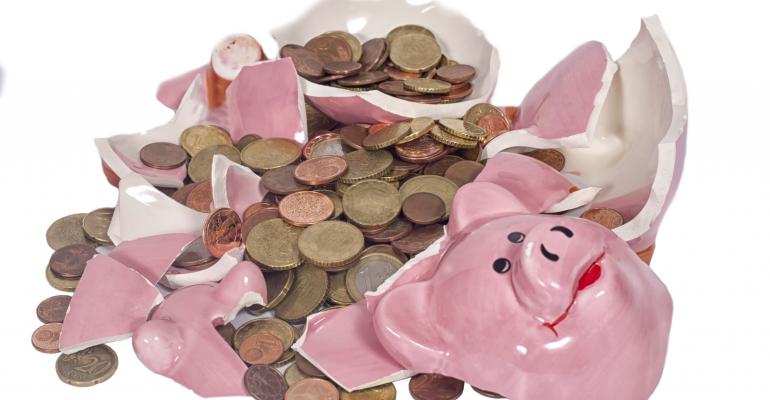 How to Break a Bank

The debacle surrounding the Swiss National Bank’s (SNB) end to the euro/swiss Franc (EUR/CHF) currency peg has caused significant market volatility and counterparty defaults, and yet most financial pundits are suggesting that we simply move on. Critical investors, nevertheless, need to assess the situation more carefully, as there is more to the story than meets the eye.

To refresh our collective memory: In 2011, capital flight from Europe sparked a substantial rise in the value of the CHF, which was detrimental to Switzerland’s domestic economy. The SNB’s response, at that time, was to manage the rise of the franc by pledging to buy “unlimited quantities” of euros in an attempt to “artificially” weaken their currency. This operation became institutionalized through a new “cap” on the EUR/CHF exchange rate. The day of the 2011 SNB announcement, the franc lost about 10 % vs. the euro, and all appeared to be as expected, in fine Swiss order – until last week.

To effectively manage the currency peg, the SNB has expanded its balance sheet to unprecedented levels - unprecedented not only in terms of Switzerland's GDP, but also in comparison to any other global central bank. For perspective, even after years of an aggressive policy stance, the Fed has “only” moved its balance sheet to 25 percent of GDP vs. Switzerland’s 80+ percent. Whereas any national bank, with its power of money creation, cannot technically go bankrupt, the SNB is partially privately owned via stocks listed at the Swiss exchange. Therefore, the leverage ratio applied to defend the franc has likely become a hot topic, despite the SNB's CHF 38 billion (~$38.2 billion at 12/31/14) suggested profit for 2014.

Official arguments by Swiss policymakers to defend the “tsunami” caused in financial markets in removing the currency peg are not plausible, as their original plan was to fight both an unfavorably strong Swiss franc and deflation, and nothing has changed in this respect: the CHF initially popped a magnificent 30 percent after the removal of the peg, more or less a “black swan event” in FX markets, and the Swiss economy still has negative inflation. Further, it certainly was not a coincidence that one of the brightest minds of monetary policy, Swiss-born economist Baltensperger, made his case for the SNB to diversify its currency buying.

In our MoneyClip Blog at HighTower, well before the SNB acted in 2011, I noted that:

“… In our view, necessary adjustments concerning the global debt situation will most likely occur in foreign exchange markets first, leading to a “reset” of the system or, in other words, a re-pricing of asset markets - there is plenty of historical evidence to suggest that political intervention will initiate such change; this in mind, investors are left somewhat in a “catch 22,” as during the time of adjustment or transition to a new monetary system, deflationary and inflationary forces will co-exist, making investing very difficult..."

The most important fact to take away is that even central banks cannot withstand the full impact of deflationary forces, and when “adjusting” (or better yet, manipulating) free price formation, the currency market is not the easiest place to be. Not only is the trading volume larger than in any other financial market, but in order for one value to move down, another needs to move up: inherently unfavorable conditions of a closed system. Keeping this important fact in mind, currency wars have entered another dimension. No country in the aftermath of the 2008/2009 credit crisis will be able to afford a strong currency.

The SNB may not have been broken in the traditional sense, but it has lost credibility. From here, we will likely see other desperate attempts by central banks to manage financial market outcomes. At the end of the day, we will remember these events as ill-fated financial experiments, with little value in the bigger picture. Investors need to remember to seek “currencies of the future,” or investments that will hold value without being subjected to political interventions. Although an unpleasant consideration given current conditions, hard and liquid commodities and emerging economies may be future stores of global purchasing power.