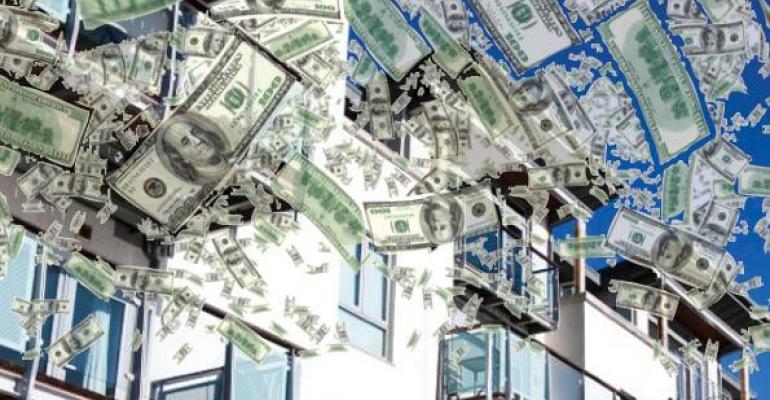 Even after last week’s Federal Reserve meeting, it’s still anyone’s guess as to when the Fed will increase interest rates – some say the move will come this spring, others say by summer.

One thing that is certain is that when interest rates do rise, many net lease REITs could face serious financial challenges.

People tend to look at me funny when I say that.  Net lease REITs have, after all, performed quite well for investors over the last few years.  Net lease property values have risen and, consequently, so have REIT share prices.  The sun has clearly been shining on this space.  So allow me to explain why I see storm clouds on the horizon.

According to research conducted by Blue Vault Partners and Resource Real Estate[1], respectively, 77% of all non-listed REIT portfolios are invested in net lease properties, and 60% of those leases contain no rental increases in their contracts. Those leases are what we in the real estate industry call “flat leases”, and they spell trouble for the REITs holding these properties when rates begin to rise.

To understand why, first note that many REIT acquisitions are financed initially using short term, interest only, variable rate debt, which is usually later rolled into longer term debt instruments.  This is facilitated in and through the CMBS marketplace.

Second, it is important to understand that income producing commercial properties are valued based on the return investors demand for a given property, relative to properties of a similar type and risk profile and other income producing investments.  In other words, if a property’s annual rent is $500,000, and it sells for $10 million dollars, investors have implicitly set 5% as their required rate of return for that property.  This rate is commonly referred to as the property’s “cap rate”.

All of the above creates a significant problem for net lease REITs for two reasons.

The second problem is much more insidious.  As many of these transactions have flat rents, and therefore flat net operating income (NOI), as rates rise these assets will be sold at higher cap rates than those at which they were purchased, resulting in the loss of invested equity.

You may recall reading about the so-called “extend and pretend” activities of lenders a few years back.  Those accommodations were provided to, primarily, commercial real estate buyers who got in over their heads during the boom of 2005-2007. A massive amount of those loans are projected to mature between 2015-2017; as much as $600 billion in debt could come due during this period[2].  The problem is, a significant number of these loans are underwater and will not be able to be refinanced at today’s more stringent underwriting metrics.

This is very bad news for REITs holding legacy flat-rent properties.  If they are able to refinance those properties, loan-to-value (LTV) requirements will likely be lower than when the initial loans were underwritten.  Even if values remain constant, a decrease in LTV from 70% to 60% percent will mean that a property purchased for $10 million now requires the borrower to provide roughly an additional $1,000,000 in equity to refinance the loan.

But the real kicker for net lease REITs is the fact that, if rates rise, valuations on flat-rent properties will almost certainly fall.  Again, commercial real estate is valued based on a required rate of return realized from a property’s rent.  If the yield on risk-free assets is rising, cap rates for commercial real estate will generally mimic that movement.

If a property with a $500,000 flat NOI were acquired at a 5% cap rate for $10 million, and that property is subsequently sold at a 7% cap rate, investors will loses more than $2.8 million.  If the property were financed at 70% debt, that loss represents almost all of the invested equity.

That is why we have seen sophisticated commercial real estate investors shift their preference to real estate with significant upside potential, both through contractual rental increases and by actively managing the assets to enhance value.  As interest rates rise, passively investing in flat-rent net lease real estate properties will no longer generate growth, or protect capital.

Of course, I could be wrong and rates could stay low forever.  But if I were a net lease REIT investor, I’d be stocking up on umbrellas.

Jacob Frydman is the Chairman and CEO of United Realty, a real estate advisory firm and sponsor to public and private real estate investment products.