Global Equities: A Return to Normal?

Overall, our outlook is positive, as we think that current economic momentum in developed markets should trump emerging markets weakness and provide potential for modestly positive returns in 2016.

A year ago, the watchword among global investors was divergence—would growth and monetary policies take different paths around the world? In some ways, 2015 unfolded as anticipated, with contrasting economic weakness in emerging markets and signs of stability in developed markets. But in other ways, the story went off-script. The U.S. did not surge as quickly as expected, forcing the Federal Reserve to delay its rate increases and heightening uncertainty about U.S. monetary policy. Meanwhile, disappointing growth out of China and its clumsy devaluation of the yuan contributed to violent global price swings in the second half of the year, before steady data in the U.S. and Europe calmed markets.

As we look ahead to 2016, the issues of growth, monetary policy, China/emerging markets weakness and commodity pricing are key variables for global equity markets.

We anticipate modest global growth, supported by continued accommodative monetary policy. Despite a shift to tightening by the Fed, we envision rates remaining lower than in past cycles and we expect a very gradual path to modestly higher levels. Although the U.S. economy is not booming, it is also not rolling over. With help from a healthy consumer, a solid housing market and low oil prices, we believe it could expand in the 2.5% range in the coming year. Europe appears to have skirted a deflationary spiral and, supported by the cheaper euro and ECB stimulus, seems to be on track for continued improvement in the year ahead. Meanwhile, the yen’s weakness is bolstering Japanese exporters, but the country’s overall recovery is sputtering as Abenomics’ fiscal and monetary easing has yet to be followed by meaningful structural reform. Overall, emerging markets remain a concern, as commodity-focused economies are especially vulnerable to conditions in China—which continues to be one of the tail risks for equity markets.

China's Transition is a Key Question

There’s no denying China’s importance to the world’s economy at this point, as it has become the single-largest contributor to marginal global growth. The summer’s events highlighted China’s impact, but not necessarily for the better, as the country was forced to introduce significant capital infusion to stabilize its financial markets—this after it had ignited global concerns by devaluing its currency. Unfortunately, this government’s naive policy decisions weakened to a degree the credibility of the China A-share market, and we will closely watch the tenor of future decisions.

Stepping back, China’s growth is clearly slowing, but that’s to be expected as it tries to engineer a difficult transition from an investment- to consumption-led economy. For the coming year, China’s official estimate for GDP growth is 7%; markets are more pessimistic, discounting closer to 4%-5%.

For much of 2015, a major focal point for the markets has been the rate policy of the Federal Reserve. In general, FOMC members have sought to be very transparent, but their mixed signals on rates have at times frustrated investors and heightened market volatility. We believe the Fed will increase interest rates in a slow, deliberate manner, and that rates will ultimately wind up at moderate levels. The Fed is unlikely to undermine a delicate recovery by being too aggressive, especially given a very low inflation rate and continued questions about the global expansion. During slow rate cycles, U.S. equities have often performed well, as shown in the accompanying chart. However, when the Fed has raised rates in an accelerated fashion, equity markets have often faced difficulty. In Europe, the ECB has been successful in driving down the price of the euro and helping to stimulate the eurozone economy, and they seem likely to stay the course or even step up their accommodative posture. Japan also seems likely to remain accommodative given its sluggish growth.

Fed Rates Will Likely Be Gradual 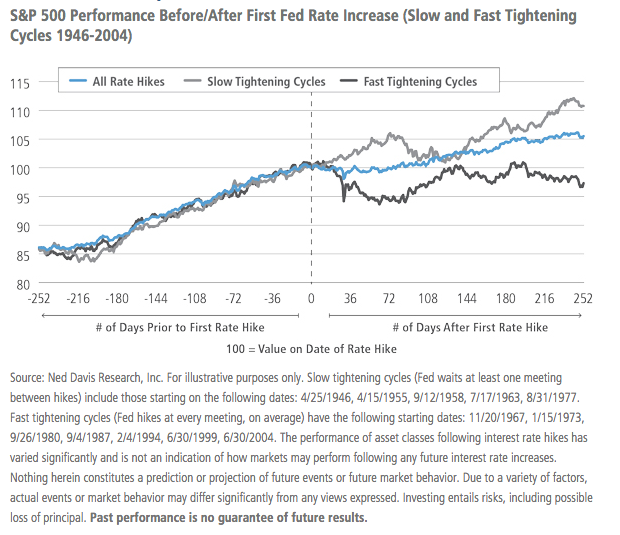 We believe the combination of supportive policy and moderate growth should provide a positive backdrop for global equities in 2016, although the current low-growth environment leaves little room for error. The U.S. is a growth leader in developed markets, but after the summer’s volatility, U.S. equities rallied sharply, making valuations less compelling. Earnings trends have been mixed in 2015, largely due to weakness in energy companies and the impact of the strong dollar on multinationals. For 2016, the consensus suggests a return to positive territory, but expectations could soften as there is little room for margin expansion, and economic growth expectations are modest.

Europe is earlier in its recovery, as reflected in its lower growth rate, but, in our view, in some ways has more upside potential for investors than the U.S. Specifically, profit margins are much further below their pre-2008 financial crisis peaks, suggesting that continued expansion, supported by loose monetary policy, a weak euro and low energy prices, could translate into better earnings. Our Global Equity team sees appeal in non-U.S. multinationals that are benefiting competitively from cheap currencies (versus the dollar), as well as companies that are leveraged to the European monetary easing cycle. They believe Japanese exporters should be helped by currency translation but remain somewhat vulnerable to further slowing in China. 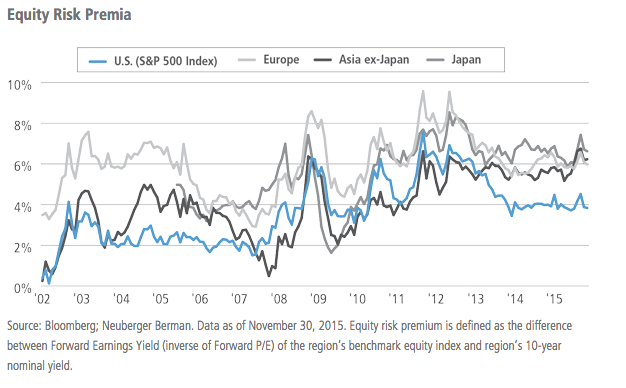 On the surface, emerging markets appear quite cheap, especially in relation to earnings growth, though it’s worth remembering that higher-quality companies within more attractive markets have less of a discount to developed markets than the broader indices. In general, currency and current account levels have adjusted to commodity declines, although commodity-driven economies such as Brazil, Russia and South Africa remain vulnerable. Overall, our Emerging Markets Equity team believes that commodity-importing countries, benefiting from lower input prices, are relatively attractive. They also favor domestically oriented businesses, which are somewhat insulated from global economic forces. In their view, reform-minded countries like India seem attractive from a long-term perspective, but valuations may have gotten ahead of the actual pace of change.

Pulling it all together, we believe that global equity markets are in for a relatively volatile period as investors adapt to the Fed tightening cycle. While returning to a more normal rate environment is a long-term positive, this could be exacerbated by events in China or indications that global growth have failed to reach already measured expectations. Moreover, geopolitical conflicts could result in periods of heightened market turbulence. At the same time, we are encouraged by growth in the U.S. and improving economic traction in Europe. On balance, we are reasonably optimistic, and see potential for modestly positive returns in 2016.

This material is provided for informational purposes only and nothing herein constitutes investment, legal, accounting or tax advice, or a recommendation to buy, sell or hold a security. Information is obtained from sources deemed reliable, but there is no representation or warranty as to its accuracy, completeness or reliability. All information is current as of the date of this material and is subject to change without notice. Any views or opinions expressed may not reflect those of the firm as a whole. Neuberger Berman products and services may not be available in all jurisdictions or to all client types.

This material may include estimates, outlooks, projections and other “forward-looking statements.” Due to a variety of factors, actual events may differ significantly from those presented. Investing entails risks, including possible loss of principal. Investments in hedge funds and private equity are speculative and involve a higher degree of risk than more traditional investments. Investments in hedge funds and private equity are intended for sophisticated investors only. Diversification does not guarantee profit or protect against loss in declining markets. Indexes are unmanaged and are not available for direct investment. Past performance is no guarantee of future results.

All information as of the date indicated. Firm data, including employee and assets under management figures, reflect collective data for the various affiliated investment advisers that are subsidiaries of Neuberger Berman Group LLC (the “firm”). Firm history includes the history of all firm subsidiaries, including predecessor entities.

This material is being issued on a limited basis through various global subsidiaries and affiliates of Neuberger Berman Group LLC. Please visit www.nb.com/disclosure-global-communications for the specific entities and jurisdictional limitations and restrictions.