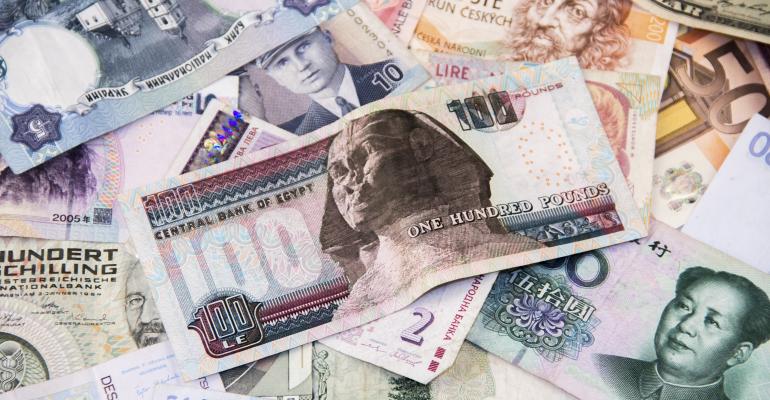 Foreign Exchange: No Longer Buried in the Footnotes

In recent quarters, as investors have tolerated a period of policy-driven volatility, one type of asset has received additional attention: foreign currency. Part of currencies' notoriety is based on the fact that they are not as range-bound as they once were, mostly due to the fact that global central banks' extraordinary policies in recent years have moved sentiment fairly frequently.

Consider, for instance, that certain currencies declined sharply recently — the Turkish lira and the South African rand are two notable examples. Some fund managers, especially those who oversee international strategies as we do, are therefore paying special attention to currencies in an effort to protect overall investment performance.

Before discussing currencies in the context of portfolio management, it's worth mentioning that currency fluctuations can have very real effects at the company level. In this sense, currencies are not just abstractions that appear on financial statements; their movements have real-world implications that can affect a company's bottom line. In 2013, large multinational companies domiciled in the United States reported that currency swings had a negative effect of $17.8 billion on earnings. (Source: Dow Jones.)

At this writing, foreign exchange data indicate that currency values in many countries are recovering from a period of weakness that lasted from late 2013 into early 2014. (The chart below takes a closer look at how the U.S. dollar has performed against a basket of major currencies during the past 12 months.) This resurgence has been driven in part by renewed optimism about political and economic situations around the world, notably in peripheral Europe.

Foreign currencies: Up and down versus the dollar

The WSJ Dollar Index measures the strength of the U.S. dollar against a basket of 16 of the world's major currencies. From starting point to ending point, the index has moved within a decently tight range during the past 12 months (with a slight downward trend). Despite the mild nature of the overall trend, choppiness during the period was substantial. 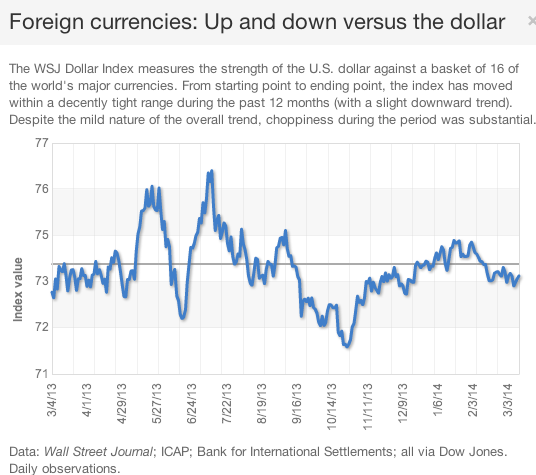 Currency markets can seem perplexing, and indeed a recent study published by financial services firm ING1 cited currencies as among "the most confusing" financial instruments available. Similarly, a report by The Research Foundation of the CFA Institute2 described them as being "difficult to model," noting that "valuation can be elusive."

This is largely because foreign exchange markets are constantly evolving; economic cycles, political developments, and policy actions affect the attractiveness of one country's currency over another. To illustrate the unpredictable nature of currency movements, it helps to consider what happens to a country's currency when its securities markets advance and decline. You might expect to see a single relationship in which currencies follow the path of their native securities markets. But in reality, the relationship varies greatly from country to country. To put a finer point on this, the table below looks at a handful of nations, showing the correlations between their security markets and their currencies. 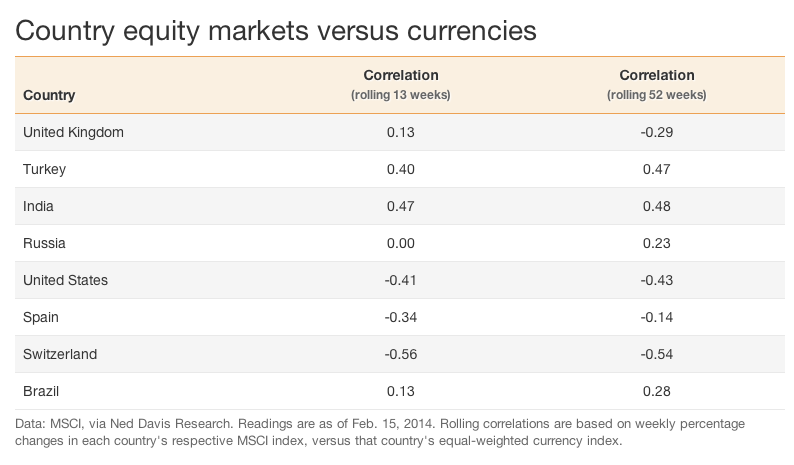 Currency markets have many drivers, and these drivers tend to vary through time. What's your philosophy when it comes to pursuing currency strategies?

Chen: Exchange rates are influenced by many factors, including high liquidity and frequent bouts of volatility. Therefore, risk–return profiles for currencies can lie within a wider range than they do with other asset classes. Because of this (or at least in part), the inclusion of currency exposure within our portfolios does not happen in a vacuum — we believe it's better to make sure that currency positions are calibrated with other asset classes in order to help control the portfolio's overall risk-return profile.

What are some factors that influence your inclusion of currencies in the portfolios you oversee?

Chen: As we conduct daily research, we monitor many factors that drive currency markets. Notable examples include:

2"A New Look at Currency Investing." The Research Foundation of CFA Institute, December 2012.

Diversification may not protect against market risk.

Fixed income securities may also be subject to prepayment risk, the risk that the principal of a fixed income security may be prepaid prior to maturity, potentially forcing an investor to reinvest that money at a lower interest rate.

International investments entail risks not ordinarily associated with U.S. investments including fluctuation in currency values, differences in accounting principles, or economic or political instability in other nations. Investing in emerging markets can be riskier than investing in established foreign markets due to increased volatility and lower trading volume.

Any Macquarie Group entity or fund noted on this page is not an authorized deposit-taking institution for the purposes of the Banking Act 1959 (Commonwealth of Australia) and that entity's obligations do not represent deposits or other liabilities of Macquarie Bank Limited ABN 46 008 583 542 (MBL). MBL does not guarantee or otherwise provide assurance in respect of the obligations of that entity, unless noted otherwise.