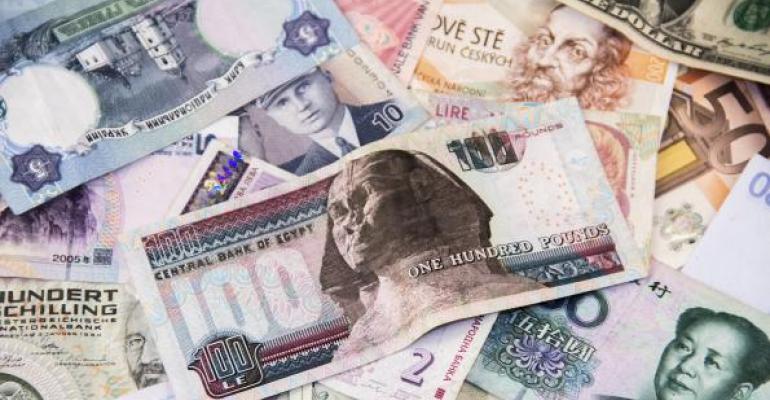 Emerging market stocks have now pulled ahead of the performance of the S&P 500 Index for 2014, which may finally mark the beginning of the turn for EM relative performance.

The emerging markets (EM) asset class has been especially disappointing for investors in the past few years [Figure 1], as measured by the MSCI Emerging Markets Index. However, last week EM pulled ahead of the performance of the S&P 500 Index for 2014. Might this mark the beginning of the turn for EM relative performance? We think it may. A little history may help illustrate why. 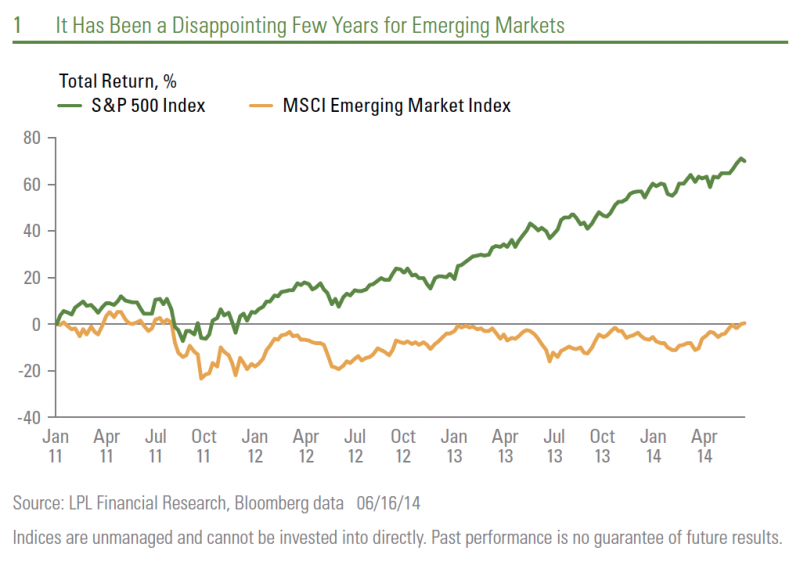 EM investors in the 1990s were used to the huge up-and-down swings of the EM asset class as EM countries in Asia and Latin America were prone to financial crises—from the Mexican “peso crisis” in 1994, to the Asian “contagion” of 1997-1998, to the Argentine debt default of 2001. But from 2002–2007, the BRIC era (named for a 2001 paper on the emerging importance of the economies of Brazil, Russia, India, and China), EM stocks experienced a decade of spectacular performance resulting from a few key drivers [Figure 2]. 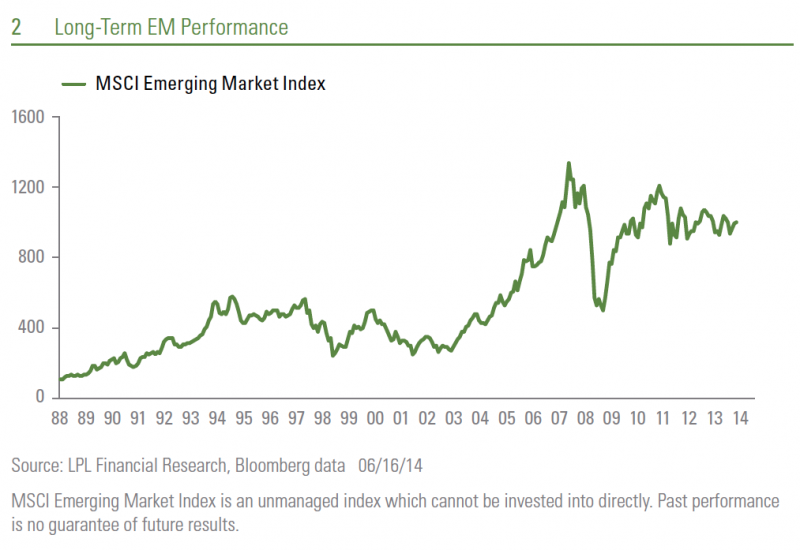 Valuation. EM valuations rose even as developed market price-to-earnings (PE) ratios fell as an environment of sluggish growth in developed economies prompted investors to seek rapidly growing EM companies. In addition to rapid growth, the valuations were supported by structural reforms undertaken in these countries that extended from the crises of the 1990s.

From BRIC to SICC

From 2007 to the present, EM stocks failed to keep up with their developed market counterparts for a few reasons:

Improving growth in developed economies. Many emerging markets had become dependent upon developed economy weakness. The soft economy of the developed world prompted the Federal Reserve (Fed) and other central banks to pump money into the global financial system, encouraging capital to flow into the emerging markets and allowing them to run unsustainable trade and budget deficits. As global growth began to improve, the Fed has started to slow its bond purchases, and that change is prompting some emerging markets to have to quickly adjust by devaluing their currencies and sharply slowing spending.

Compression of valuations. EM stocks saw their valuations slide back to a more typical discount to the developed markets as their relative growth differential shrank and risks returned.

Curtailing stimulus. The Fed suggesting it may begin to normalize rates acted as a major headwind for EM in 2013. To demonstrate the sensitivity EM stocks have to this driver, the start of the Fed’s taper talk in May of last year contributed to a 16% decline for the MSCI EM index from May 9, 2013 to June 24, 2013. While it eventually rebounded, renewed concerns emerged in the fourth quarter and weighed again on the asset class—although to a significantly lesser degree—resulting in a loss for the year.

Several factors could support a turning point for the relative performance of EM stocks:

Growth. The deceleration in global growth in recent years has weighed on EM [Figure 3]. Rebounding EM economic growth appears to have been a key driver of recent outperformance with a rebound in positive economic surprises ending the multi-year downtrend in the Citigroup Economic Surprise Index for EM [Figure 4]. A driver may have been better growth in Europe, further supported by rate cuts by the European Central Bank (ECB) last week. Europe is a larger trading partner for EM than the United States or Japan, so this is a significant positive development. EM economies are highly leveraged to global trade growth, and a majority of the components of EM stock indexes are cyclical—with much larger weightings in materials and financials relative to the S&P 500 Index and significantly less exposure to the defensive health care sector. 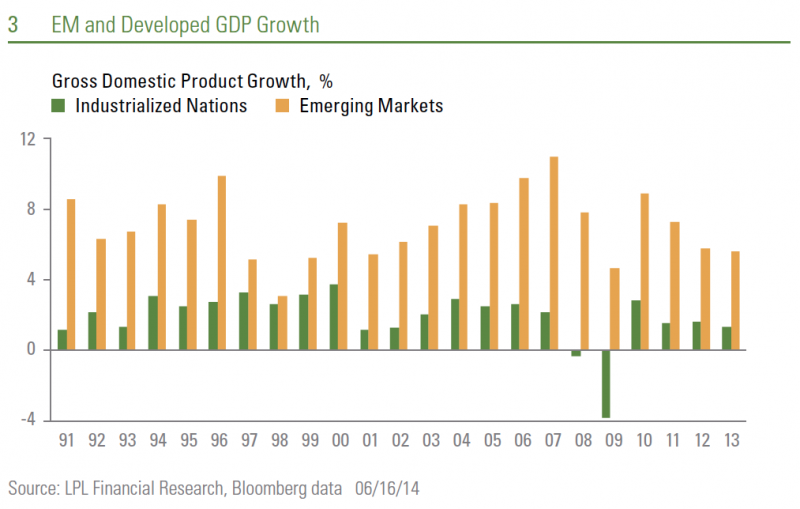 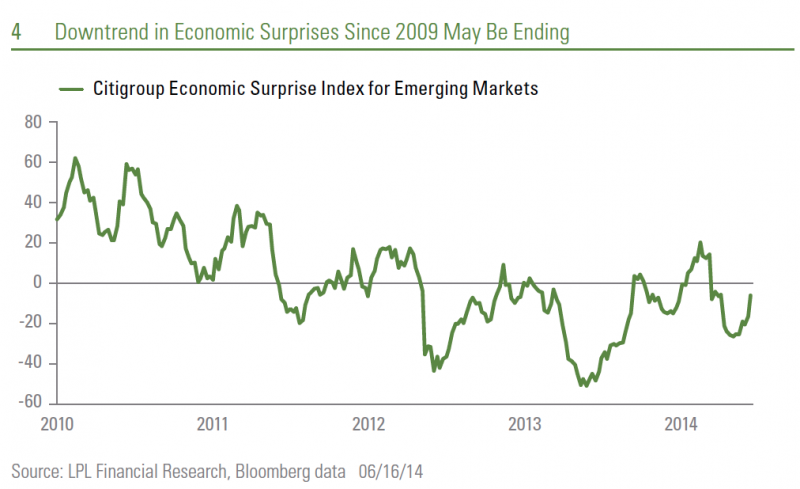 Valuations. PEs are trading at a significant discount to U.S. and other global developed stock markets [Figure 5].

Improving financial conditions. The Fed has calmed market fears over the pace of normalizing monetary policy in the United States and the ECB has cut rates, while the Bank of Japan continues to provide enormous stimulus. 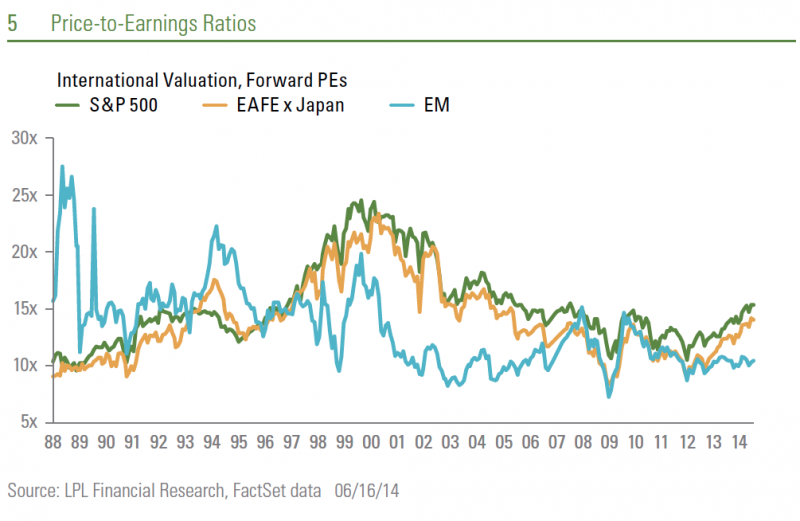 Nevertheless, risks are present that could cause EM stocks to continue to lag the U.S. stock market. The biggest of these risks are China’s growth trajectory, the impact of trade and budget deficits, and political changes.

After years of avoiding EM, we believe these factors, on balance, are beginning to favor the return of some portfolio exposure to EM, but only added slowly as evidence of a lasting turn in relative performance mounts.

International and emerging market investing involves special risks such as currency fluctuation and political instability and may not be suitable for all investors.

The PE ratio (price-to-earnings ratio) is a measure of the price paid for a share relative to the annual net income or profit earned by the firm per share. It is a financial ratio used for valuation: a higher PE ratio means that investors are paying more for each unit of net income, so the stock is more expensive compared to one with lower PE ratio.

Forward Price-to-Earnings is a measure of the price-to-earnings ratio (PE) using forecasted earnings for the PE calculation. While the earnings used are just an estimate and are not as reliable as current earnings data, there is still benefit in estimated PE analysis. The forecasted earnings used in the formula can either be for the next 12 months or for the next full-year fiscal period.

Gross Domestic Product (GDP) is the monetary value of all the finished goods and services produced within a country’s borders in a specific time period, though GDP is usually calculated on an annual basis. It includes all of private and public consumption, government outlays, investments and exports less imports that occur within a defined territory.

The MSCI Emerging Markets Index is a free float-adjusted market capitalization index that is designed to measure equity market performance of emerging markets.

Citigroup  Economic Surprise Index (CESI) measures the variation in the gap between the expectations and the real economic data.