Equity markets in developed countries whose central banks deployed unconventional monetary policies did exceedingly well in 2013.  Japan’s stock market outperformed the rest of the world,  largely because their currency was allowed to depreciate more than 25% in 2012-2013.  Recent studies have shown high positive correlations between central bank policies and equity returns. In 2013, the Federal Reserve’s unconventional policies and the SP500 positive correlation exceeded 0.9.  Though correlation does not imply causation, as the Federal Reserve embarks on a path of removing these unconventional policies in 2014, we just have to wonder if that removal of asset purchases will also precipitate a mean reversion in the US equity markets?

Unlike the Japanese Yen which has been allowed to depreciate, the US dollar has shown remarkable stability over the past three years. Despite the Federal Reserve’s unconventional monetary policies, the US dollar has closed virtually at 80 cents for three consecutive years.

The annual returns of commodity prices, on the other hand, which are rarely down more than one year in a row, suffered their first ever negative returns for  three consecutive years.  Deflationary pressures in the global markets have been evident outside of financial assets since March 2011 (using the US PPI index as a proxy for commodity inflation). The potential for a “deflationary shock” to hit both commodities and global equities will be watched closely throughout 2014.

The currencies and stock indices of Emerging Markets with high current account deficits suffered a great deal of downside volatility in 2013, particularly Turkey, India, Indonesia, Brazil, and South Africa. This is anecdotal evidence of some sort of Fed-induced “deflationary shock” resulting from their decision to reduce asset purchases in 2014.

Quantifying a Mean Reversion to a 13x Forward Multiple 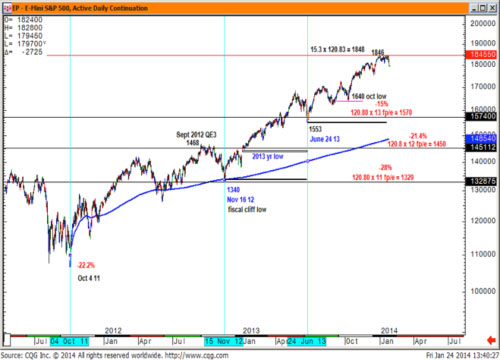 In the fourth quarter of 2013, US lawmakers managed to resolve their fiscal issues for the next few years. This is an unambiguous positive for the economy that may add another 1/2% to 1% to the GDP growth rate.  Economic indicators entering 2014 have been unambiguously positive as well.

On the monetary front, short term interest rates are expected to remain zero bound for several more years. NY Fed models, in a 2013 study, forecast “historically high excess returns for the SP500 over the next 5 yrs due to exceptionally low Treasury yields at all foreseeable horizons.”  However, as Goldman Sachs pointed out, the forward P/E multiple in the SP500 is historically high by almost any measure.” Even with the recovery remaining on track, the stock market finds itself much less attractively valued than a year ago.

Japan’s current account deficit widened to record levels in November 2013. Strong demand for imported goods resulted from increased energy imports and pull-forward demand ahead of the value-added tax VAT that Shinzo Abe will introduce in April 2014. The widening of the current account deficit is likely to put further pressure on the Japanese Yen until after the introduction of the value added tax. A weakening Yen should continue to support exports and thus the Japanese stock market in the first half of 2014.

China’s official GDP growth rate in 2013 slowed its lowest level since 2003 on the back of tightening new credit since May 2013. More recently, Chinese policymakers have been pushing up short term interest rates in a further effort to deleverage and slow the balance-sheet explosion in recent years.  The biggest challenge ahead for China is their large stock of  unproductive debt, much of which will need to be rolled over. What has to be rolled over will constrain banks from lending towards more productive uses. To shift towards more productive uses, China will begin a gradual process of restructuring of unproductive debt.

Europe’s financial system managed to skate through 2013 without a scratch.   “Continued buying of peripheral debt is the real story,” said Brown Brothers Marc Chandler in early January, adding that “many of the countries on the periphery are seeing much better export performance than people thought likely.”

While EU peripheral debt enjoyed low yields and narrow credit spreads in 2013, the ECB will conduct bank stress tests in 2014. ECB President Mario Draghi said in October that “banks do need to fail” and “if they do fail, they have to fail.” EU banks that fail will be bailed-in by depositors and unsecured creditors and capital controls will be implemented.

In preparation for the stress tests, EU banks have failed to absorb roughly $161 billion in peripheral debt over the last six ECB auctions since late November. There is now a growing funding gap for peripheral EU debt. To close the funding gap, either the ECB implements QE or the yields on peripheral debt will rise in 2014.

Nell Sloane is a principal of Capital Trading Group LP (CTG). Nell began her career at the Chicago Futures Exchanges more than 25 years ago, working for a grain trader at the Chicago Board of Trade. She became a featured contributor to many financial publications and eventually launched her own commodity newsletter called The Opening Belle. She has been a featured speaker at numerous financial seminars and radio shows, and was recognized by financial publications such as Hume Super Investors Files, Opportunities in Options by David Caplan, McMaster OnLine by R.E. McMaster, and The Art of the Trade published by McGraw Hill.

Nell formed CTG with Patrick Lafferty. CTG has clearing relationships with ABN AMRO, FCStone, Cunningham Clearing, RJOBrien, RCG, and OEC. In addition to being principal and an associated person of CTG, Nell holds her securities registration and matches high net worth clients with institutional traders who fit their criteria. CTG is an investment firm specializing in trade execution, account management for CTAs and matching investors with the appropriate managed futures products to provide a more diversified portfolio that the traditional stocks and bonds have to offer. In addition, Nell is the managing member of a multi-advisory commodity fund.

If you have any questions about this article, please feel free to call Nell Sloane at 800.238.2610 or email her at [email protected]

DISCLAIMER: Capital Trading Group, LP ("CTG") is an Introducing Broker and a member of the NFA.  CTG does not warrant the correctness of any information herein or the appropriateness of any transaction. The contents of this electronic communication and any attachments are for informational purposes only and under no circumstances should they be construed as an offer to sell or a solicitation to buy any futures contract, option, security, or derivative including foreign exchange. The information is intended solely for the personal and confidential use of the recipient of this electronic communication. If you are not the intended recipient, you are hereby notified that any use, dissemination, distribution or copying of this communication is strictly prohibited and you are requested to return this message to the sender immediately and delete all copies from your system. All electronic communication may be reviewed by authorized personnel and may be provided to regulatory authorities or others with a legal right to access such information. At various times, CTG may have positions in and effect transactions in securities or other financial instruments referred to herein. Opinions expressed herein are statements only of the date indicated and are not given or endorsed by CTG unless otherwise indicated by an authorized representative. Due to the electronic nature of electronic communication, there is a risk that the information contained in this message has been modified. Consequently, CTG cannot guaranty that messages or attachments are virus free, do not contain malicious code or are compatible with your electronic systems and CTG does not accept liability in respect of viruses, malicious code or any related problems that you may experience. Trading in futures or options or other derivatives entails significant risks which must be understood prior to trading and may not be appropriate for all investors. Please contact your account representative for more information on these risks. Past performance of actual trades or strategies cited herein is not necessarily indicative of future performance. Privacy policy available upon request.