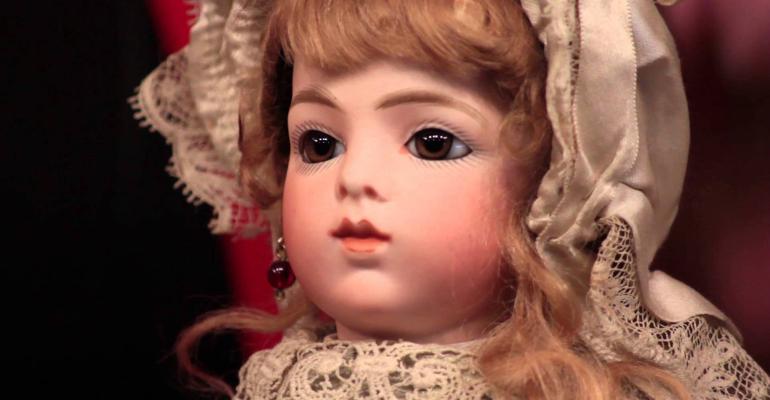 The Economics Behind a $1 Million Auction of Vintage Toys

(Bloomberg) -- Like every collectibles market, the world of antique dolls is subject to towering heights and devastating lows.

"It's almost like the wind, or almost like fashion," said Jay Lowe, the head of the doll department at Morphy Auctions in Denver, Pa. "What people want this year might be different than what people will want 10 years from now."

The collapse of the William and Mary doll market is, Lowe said, the inverse result of supply and demand: The more sought-after the dolls became, the less often they came on the market. Without a robust market, collector interest waned. "You can't collect something you can't buy," Lowe said. "And eventually if you're a collector, you might become discouraged and start to collect something else. The market sort of fell apart."

The silver lining is that potential collectors are still out there. Lowe said that French dolls, like the auction's Lot No. 13, a "Magnificent Early French Mystery Bebe," remain in demand. "That's one of the hot areas," he said.

While taste might be capricious, there are a few overarching qualities that Lowe said will inevitably confer value. "Desirability is a factor, rarity can play a factor, and condition is the biggest factor of all," he said. "I use the phrase 'Condition is king.' "

Given that the doll and toy market is comprised of objects built for and used by an age demographic not normally attuned to preservation (try explaining "collectibility" to a 5-year-old), toys in excellent condition are both alluring and elusive. The upcoming Morphy auction has several, including a toy car from the Japanese company Takara's "Diaclone" line of toys, which were a precursor to the Transformers toys; still in its original box, the car is estimated between $6,000 and $9,000.

Novelty is also a factor. The Morphy auction includes a lot described only as a "Wooden Smuggling Doll," which Lowe guessed is from the mid to late 19th century. The doll has a hidden compartment in its torso, and "perhaps documents or a map" could be squirreled away in its torso, Lowe mused. "When you're at customs between countries, they might search a briefcase but they wouldn't check your child's doll," he explained.

And just how many people are buying these children's toys for more than a decent midrange sedan? "I'm sure you're not surprised," said Lowe, "that for a $100,000 doll you might have four or five collectors, but that for a $5,000 doll you'll have 500 collectors."