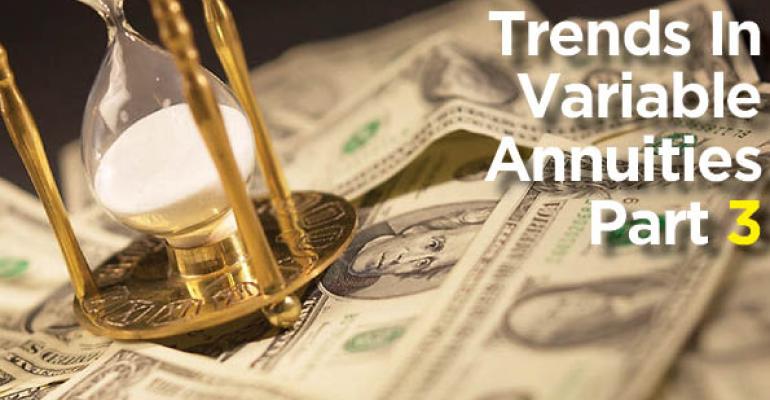 When it comes to making decisions about variable annuities, quality tends to win out over specific characteristics of variable annuities. For example, the quality of the insurance company, in terms of reputation and ratings, was very important to nearly three in four advisors (71%)—by far the highest-ranking factor among the list of potential factors. Meanwhile, investment performance and the quality and reputation of the fund managers were the second and third most common factors deemed “very important,” at 53% and 50%, respectively. However, these factors barely outranked specific fund characteristics, such as the guaranteed minimum withdrawal benefit and the breadth of fund selection.

The relative importance of various characteristics was fairly consistent across advisor channels, but there are differences when separating advisor responses based on their inclination toward variable annuities. While all advisor groups value the ratings and reputation of the insurance company, advisors who are less inclined to use variable annuities are more likely to prioritize low fees than they are investment performance—the opposite relative importance than those advisors who have 10% or more of their clients’ assets invested in variable annuities. In fact, low fees ranked just seventh out of the 10 factors for the latter group of advisors. One other area of common agreement: Very few advisors of any channel or inclination saw the availability of alternative strategies as an important consideration in their usage of variable annuities.

Next Part 4 of 4: Feature Favorites