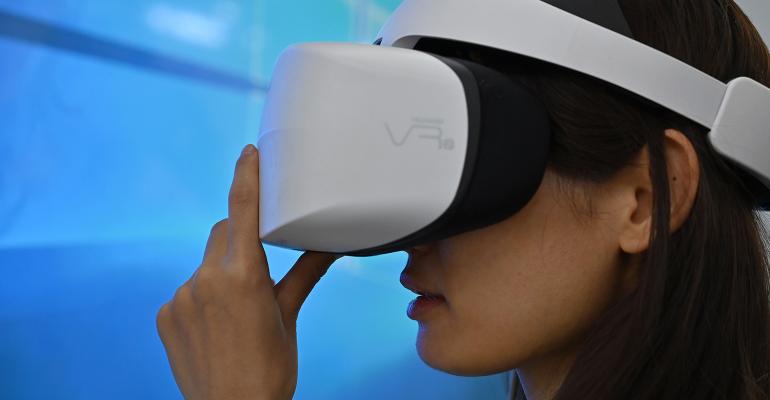 Without In-Person Meetings, Some in Wealth Management Turn to VR

Morningstar and Fidelity have tapped virtual reality, one for a new conference experience, the other for employee onboarding.

In the midst of the coronavirus pandemic, the wealth management industry is adopting virtual reality in a way that seemed largely out of reach not long ago. For the recent Morningstar Investment Conference, the firm offered a select group of attendees a glimpse of what future conferences could be like, and Fidelity Investments has now used VR as part of its hiring process mid-pandemic. While it’s too soon to say this marks the end of in-person conferences and meetings, it does mark some tangible steps toward a “virtual” future. The pandemic has spurred VR adoption far faster than many would have expected at the outset of the year.

Last week, Morningstar’s partnership with VR conference organizer Mesmerise provided dozens of attendees an Oculus Quest headset and a “front-row seat” to a virtual trade show. Mesmerise crunched the numbers, providing insight into just how popular VR was at the annual conference.

In addition to viewing the live videos on a virtual big screen, VR attendees could move around the virtual conference space to visit booths and video boards. The most popular booth was Mesmerise, followed by principle sponsor PGIM Investments. The Morningstar Game Zone and the Morningstar information booth were also top gathering spots for virtual attendees. 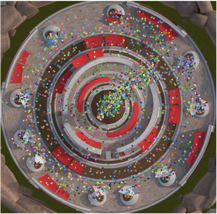 Aerial view of the digital Morningstar Investment Conference space, showing movement around the outside “booths loop” and into the central live and on-demand video viewing spaces.

Slightly less than one-third of those 65 attendees played Morningstar’s branded games, Save the Bees and Sustainable City. Over half of the same attendees viewed one or more of the conference's videos about Chicago (Morningstar's hometown).

Virtual reality is a good way to mitigate a propensity for virtual conferences to devolve into “endless webinars,” said Charlie Fink, an author and professor who researches virtual and augmented reality at Chapman University in Irvine, Calif. However, he doesn’t see virtual reality being impactful in the financial services industry “for quite some time.”

That’s because of the relative difficulty and expense of getting a VR headset, compared with the ubiquity of computer screens, both at home and in the office. VR as a concept has also had a hard time moving beyond first-adopter enthusiasts. “Remember, virtual reality has nothing to do with reality. People are surprised by that and often get bored with its graphic quality,” he said.

On the other hand, Fink isn’t aware of another company like Morningstar bringing VR to a conference. “It's a novelty move on their part. I'm sure it will get people's attention and make a statement,” he said. “All kudos go to Morningstar.”

Underscoring how unusual VR events in financial services conferences are, a company spokesperson confirmed that Schwab IMPACT, one of the industry’s largest such events, will not be including a VR component at its digital event later this year.

But conferences aren’t the only way to harness VR. Fidelity Center for Applied Technology, a lab for future technology at Fidelity Investments, used virtual reality to train 143 incoming staff hired during the pandemic, turning to the technology as a “digital medium outside of video and phone calls and … a practical way to solve for an immediate challenge,” according to spokesperson Meghan Joumas.

The VR training sessions stood in for what is typically an in-person onboarding that lasts two weeks. Instead, the “Year One University” participants made avatars to represent themselves, networking and interacting with one another from around the country.

It was the first-use case for VR onboarding for employees, added Joumas. “The visual, interactive experience allowed employees to practice interpersonal skills taught during the curriculum, explore and engage with digital technology and get to know one another through a medium that offers more dimension than a simple video call,” she said.

Whether at a conference or a company training session, virtual reality adoption accelerated in 2020, said Fink. In today’s era of social distancing and remote interaction, “presence is scarce,” he said. “Presence is difficult. The value of virtual presence is going through the roof.”