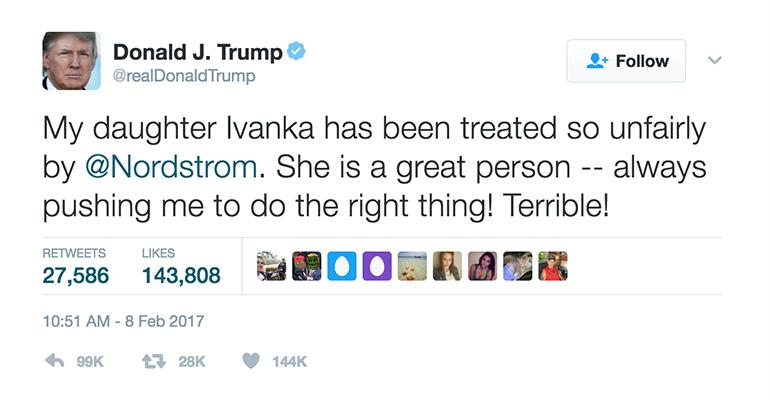 Trading on a Tweeting Trump

A bot determines how to invest based on Trump's tweets, FTJ FundChoice just grew by $1 billion and high-priced tequila.

Some day traders are hoping to cash-in on an active-thumbed president. It has been difficult to determine the impact Trump's tweets have on the companies he calls out on social media. Just take a look at this constantly updated Reuters graphic on Trump tweets and stock prices; a trend is hard to find. But, a new bot is trying to do just that, according to an article in The New York Times. Founded by an employee of the research laboratory known as X, Trump2Cash analyzes Trump tweets and automatically makes trades based on that information. Its creator, Max Braun, claims a hypothetical fund run by the robot would have a return of 59 percent since inception. The robot's coding is all open-sourced, and Braun plans to donate the money he makes on trades to Planned Parenthood and the American Civil Liberties Union. FTJ FundChoice, a turnkey asset management platform from Kentucky that now administers more than $7 billion in assets, announced it was adding Cougar Global Investments to its strategist program to offer a tactical and diversification strategy. FTJ FundChoice increased its assets under administration by $1 billion in five and a half months, which it attributed to rapid adoption of Market Movement Strategies, FTJ FundChoice’s proprietary portfolio construction program. The company also announced a slew of technology updates planned for 2017, including the Advisor Portal, fiduciary support technology, and a digital advice product for advisors.

This Is What They Mean By 'The Good Stuff'

When it comes to alcohol, price is something many look to not only for quality, but as a status symbol. After all, what's the difference in drinking that $20 bottle of Tito's vodka compared to a $30 bottle of Grey Goose? Well, just in time for National Margarita Day on Wednesday, MarketWatch is introducing us to a $525 bottle of Gran Patrón Burdeos tequila. It's just one of many super-premium tequilas on the market that have been experiencing a growth in recent years. What makes the Burdeos special is that it's finished in barrels that were formerly used for Bordeaux wines, giving it an added richness with distinctive earthy notes. At its pricepoint, this isn't shooting or mixing tequila, but Patrón does suggest perhaps creating a Burdeos Old Fashioned with it, substituting the traditional whiskey with the high-priced tequila.