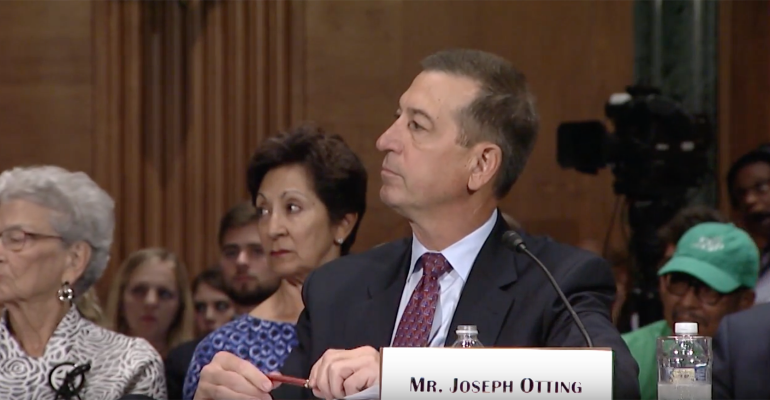 The Office of the Comptroller of the Currency made the announcement shortly after the Treasury Department released a report recommending the move.

(Bloomberg) --Financial technology companies will be permitted to seek approval to compete directly with traditional lenders under changes outlined by the agency that oversees national banks.

Tuesday’s announcement by the Office of the Comptroller of the Currency that technology firms can apply for special-purposes charters came hours after the Treasury Department released a report recommending that such a step be taken.

Despite headwinds from the banking industry and state regulators, Comptroller Joseph Otting is finishing work started during the Obama administration to find a limited status for firms that don’t operate like traditional banks. Such companies -- including marketplace lenders, payments firms and potentially those dealing in cryptocurrencies -- would have to clear regulatory hurdles to get a charter that would bypass the need for state-by-state regulation.

“Providing a path for fintech companies to become national banks can make the federal banking system stronger by promoting economic growth and opportunity, modernization and innovation and competition,” Otting said in a statement, adding that such a system will give customers more choices.

Though the OCC is an independent agency that doesn’t take orders from Treasury, it has sought to follow regulatory recommendations from President Donald Trump’s administration -- including its urging on fintech firms. Otting and Treasury Secretary Steven Mnuchin worked together as bankers before Trump tapped them for positions in government.

The idea to bring financial technology companies into banking began under former OCC head Thomas Curry in 2016, and it was met with lawsuits, including one from the Conference of State Bank Supervisors. That suit was dismissed in federal court because the OCC hadn’t yet set up its chartering policy. New York’s chief financial regulator has said she would challenge special charters if the OCC moved forward.

The Independent Community Bankers of America, a Washington-based lobby group, has said it has “serious concerns” with the OCC allowing fintech companies into banking -- especially without Congress giving it specific power to do so. ICBA has expressed fear that marketplace lenders wouldn’t face the same regulatory requirements, giving them an advantage.

Fintech and cryptocurrency firms have already been talking with OCC officials about the possibility of charters, and Otting has repeatedly said that most seemed to find the regulatory demands overly daunting. He’s said he expects to see many of the firms instead partnering with existing banks.

The OCC said Tuesday that fintech applicants “will be supervised like similarly situated national banks, to include capital, liquidity, and financial inclusion commitments as appropriate,” and they’ll face an initial “heightened supervision” like any other new bank. Each application will be open for public comment, and the agency will try to make a decision within 120 days.

The regulator underlined its authority to grant charters to special-purpose banks that engage in “one of the core banking functions,” such as lending money or paying checks.

The Treasury Department had issued a long-awaited report earlier Tuesday that urged the OCC to approve “prudent and carefully considered applications for special-purpose national bank charters,” as long as the firms don’t have federally insured deposits nor an undue advantage over “banks that have operated within the existing regulatory system for years.”

The lengthy report also recommended the creation of “sandboxes” to let fintech businesses safely try new ideas under the eye of regulators, and it said the Consumer Financial Protection Bureau’s payday lending rules should be withdrawn and other banking agencies should clear a path for traditional lenders to make more short-term, small-scale loans.