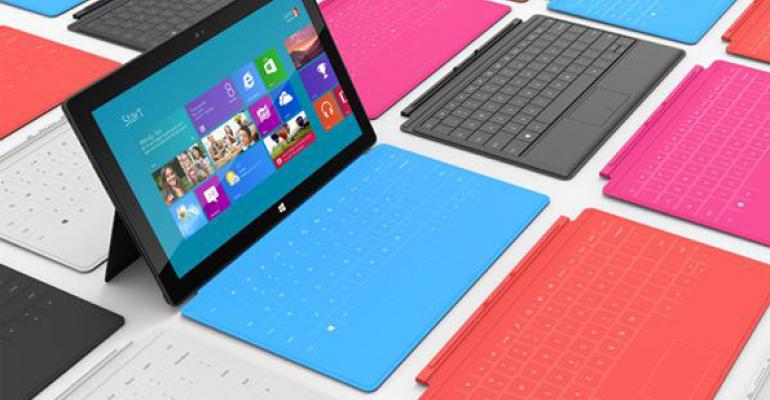 Surface to Air: Is Surface Going to be a Player in Financial Services?

Go into any Best Buy today, and new machines with peacock colored tiles promoting Windows 8 wink at you. The operating system is a touch environment that’s a long time coming from Microsoft — and a potential game changer for the Redmond folk. Along with it is Surface, a Windows 8 tablet that is meant to bully the iPad into submission. The likelihood of that in the near future? Slim, says financial services experts.

“There was a tsunami with the Apple iPad and iPhone,” says Dennis Weishan, senior technology consultant for wealth management firm Robert W. Baird, who’s been working with financial services firms for 20 years. “I’ve never seen the enterprise community adopt an end-user device this fast. It took us longer to vet the Blackberry.”

The iPad launched into the consumer market just as firms began to ease their own restrictions on what kind of devices advisors could use at work. As reps were permitted to bring in their own mobile phones, handhelds and laptops — iPad appeared. To date, more than 100 million iPads have been sold, according to the company. And its explosion in the consumer market sped up adoption in the financial services arena too.

“Consumers want something that suits them for work and also for their personal use,” says Weishan. “The iPad by far is that device. But that’s not saying Surface can’t get there.”

Still, financial services firms are hearing crickets when it comes to consideration of the Surface tablet so far. Ed Swenson, COO of Dynasty Financial Partners, is not sensing that independent advisors are looking to switch to the Microsoft tablet, nor is Jon Reiners, vice president of institutional business development for Orion Advisor Services, a portfolio accounting services firm. And Wells Fargo Advisors is looking at iPad — not Surface — today.

“Our firm is in the midst of an iPad pilot project at this point and will determine future tablet use once that pilot is completed and all information evaluated,” says Erica S. Van Ross, a communications consultant for the firm by email.

There is some nod to Surface. At Edward Jones, the firm is working to make its mobile system available on the Surface tablet by early 2013, according to an email from its chief investment officer, Vinny Ferrari. And Raymond James is running diagnostics to see how Surface will integrate into its platform. But for the most part, the iPad seems to have a grip on the rep community.

“A majority of Raymond James advisors use iPads which are totally integrated into our systems and security platforms,” says Josh Bohlander, director of Raymond James Financial’s Technology Advisor Group by email. “At this time we are evaluating and testing the Surface before we ‘certify’ it for use on our systems.”

Windows 8 is also promising to create a big learning curve for firms — a big investment of time and resources to both upgrade and train reps. And at $499 for the consumer version, and $899 for the Pro version starting in January, Surface isn’t more affordable than an iPad, plus offers far fewer apps than are supported on Apple’s device, such as Twitter.

Yet Alois Pirker, research director for the wealth management group for Aite Group, says Surface is going to have some legs inside PC-based corporations because it will be easier to integrate and work with their existing desktops. Still, it’s going to be a hard road for Microsoft to overthrow Apple’s dominance today. IT departments have worked hard to support access to their platforms from the Apple operating system, and they’ll likely move slowly in terms of supporting Surface, watching to see first how much demand there is from their reps.

“It’s still early days for Surface,” says Pirker. “But Apple has a lot of lead time. It’s certainly a tough situation for Microsoft.”