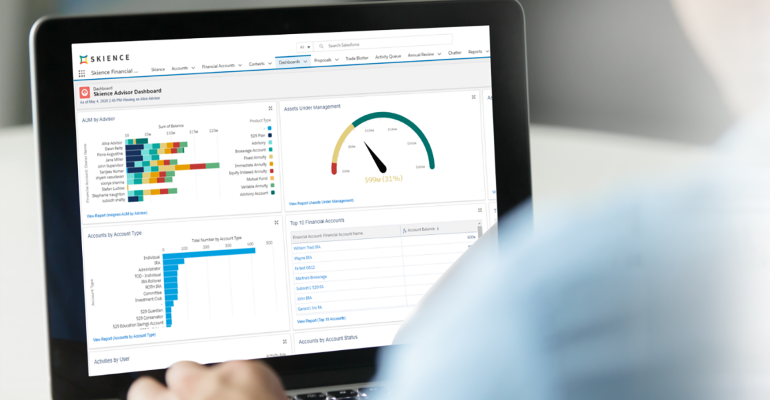 Skience is pushing its capabilities out under a hub model, bringing together existing features and partnering to develop new ones.

The tool serves as a hub for a number of “tried and true” components in the Skience arsenal, like digital client onboarding, repapering, data consolidation and management, document management, compliance and integrations, according to Marc Butler, COO and president at the firm. With its launch, wealth management firms no longer need to be Salesforce-native, a requirement for users on the flagship Skience platform.

It’s the latest signal that Skience is serious about helping its clients recruit new advisors with scalable, open-architecture technology. While built on Salesforce, like previous Skience systems, SkienceONE is designed to be an open-architecture tech hub that won’t discriminate against advisors using popular CRMs like Redtail and Wealthbox, said Butler. The API-based hub also works with proprietary CRMs, which Skience is prepared to integrate into the platform using its own resources.

Advisors considering utilizing SkienceONE should expect to pay for the services they use, with pricing breaks for bundling services or bringing over a large number of users. While not disclosing its standard pricing list, Butler said Skience wants to make its monthly, per user pricing “worth your while.”

While not a part of the launch, a client portal is under construction as Skience works with a “large national RIA,” said Butler. He declined to disclose the firm, but said the development process has incorporated the partner’s own client research and it is designed to compete with other digital platforms. The client portal should enter a pilot phase next month, he said, followed by a general release over the summer.

Skience has had a busy year. The SkienceONE launch follows an announcement earlier this year that the firm was developing a foolproof repapering feature. That tool, called the Advisor Transitions Solution, entered open pilot in April and will be fully launched next month. It is included with SkienceONE. Meanwhile, many of the other solutions on the hub are “mature capabilities that we have had for years,” said Butler. “We’re building platforms to help firms recruit and tell their story.”