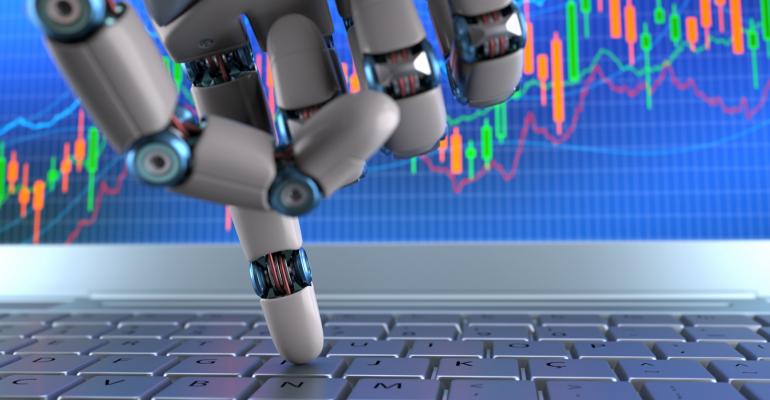 Should Your Employer Go Full Robo on Your Retirement Savings?

Betterment for Business now has more than 300 companies on board.

(Bloomberg) --Vanguard Group and Fidelity Investments manage hundreds of billions of dollars in defined-contribution money for thousands of retirement plans with millions of participants. Against competition like that, a foray into 401(k) plan management by a unit of robo-adviser Betterment, a company with $6.2 billion in assets under management, seems quixotic, to say the least.

Betterment for Business, which began signing up corporate clients in January, will announce today that it has more than 300 companies on board, with plan assets ranging from hundreds of thousands of dollars to more than $25 million. (It doesn't break out assets by business unit and won't give a number for total assets in the 401(k) unit.) Clients range from technology companies such as project management software designer Trello, to mattress maker Casper, to midsize professional service businesses such as law and architecture firms, as well as medical and dental practices, Betterment said.

It may be good timing. The Department of Labor's fiduciary rule, which takes effect in April, requires advisers for retirement investments to put a client's interest before their own. A 2015 government report estimated that adviser conflicts of interest cost investors some $17 billion a year. The rule could be a regulatory catalyst for growth, said Tyler Cloherty, senior manager with Casey Quirk by Deloitte.

"There will be more impediments to moving small-balance accounts to advisers, so more money will likely stay within the 401(k)," he said, rather than be rolled into an IRA, for example, with the plan's outside administrator.

Why would a company choose a 401(k) upstart over the long-established pros? Among the reasons ticked off by Cynthia Loh, general manager for the product, are lower fees; managed, personalized portfolios for all participants; no conflicts of interest in fund selection; and a modern, intuitive user interface. Betterment 401(k) accounts also can use a new algorithmic service the company launched in September that aims to improve a portfolio's tax efficiency, which adds to returns over time.

"The opportunity is that innovation has to happen, and the 401(k) space is not blessed with innovation," said Alois Pirker, research director for Aite Group. "It has been a shielded kind of space."

Others have made inroads with online 401(k) advisory services, although they don't tend to have a soup-to-nuts operation that stretches from record-keeping to asset management as Betterment does. Financial Engines, a well-established online advisory service that acts as a fiduciary for 401(k) plans, works with about 700 companies that employ a total of 10 million workers. It offers basic portfolio advice for all accounts and more personalized advice for an additional fee. Morningstar is also a player in the managed account advisory business for 401(k) plans.

Betterment's 401(k) offering operates much like its regular advisory service. It creates portfolios of exchange-traded funds based on your age and answers to a risk questionnaire, and it rebalances portfolios to your planned asset allocation regularly. It charges an asset-based fee ranging from 0.1 to 0.6 percentage points, depending on plan size. The ETF fees are typically 0.1 to 0.12 percentage points in the tax-deferred accounts.

Betterment for Business can do more customization of portfolios than savers can get with a generic target-date fund geared to a retirement date, Loh said. If, as she hopes, users sync up their external financial accounts with their 401(k) account, their 401(k) portfolio's asset allocation can be designed with a more complete financial picture taken into account, which should result in a better overall result.

New York City-based Trello is moving its 90-person 401(k) plan over to Betterment. Brian Schmidt, Trello's vice president of operations and general counsel, said that with his old 401(k) administrator, software-driven issues made it hard to create the 401(k) program he wanted. Betterment's big draw for him was the user experience, for individuals and on the administrative side, that he found thoughtful and easy to use.

"You can encourage good behavior by making something enjoyable to use," he said. "That's the nub of what Betterment has done."

On the other hand, for a company in the market for a 401(k) plan and choosing between a giant and Betterment, there's an old saying that you can't get fired for hiring IBM. You may incur higher fees but you're getting decades of experience.

If Betterment for Business is a blip on the big money managers' radar for now, it could serve an important purpose for Betterment beyond its ambition to create a better all-around 401(k) plan experience. It could help the company acquire pools of customers at a much lower cost than in its regular robo business.

"The cost to acquire customers is incredibly high compared to what [a robo-adviser] can monetize on the back end," said Cloherty. Signing on 401(k) plans can provide the exponential growth investors demand from young tech companies. If the venture helps 401(k) savers achieve better results at the same time, it's a twofer.