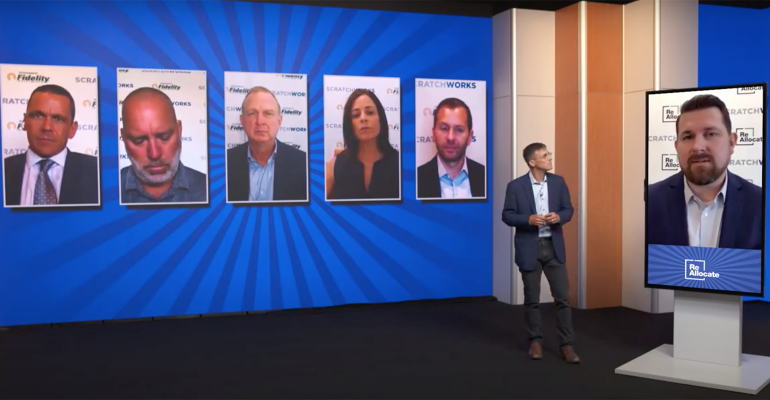 Wealthtech startups ReAllocate and Lifeworks collectively get close to $5 million in funding from financial advisors in Scratchworks' season finale.

ScratchWorks, the fintech accelerator that matches investments from financial advisors with startups in the wealthtech space, today announced funding for two of the three firms that participated in this year’s season.

Lifeworks and ReAllocate received a combined $5 million from the financial advisors and judges in the annual competition, modeled after CNBC's Shark Tank.

Thanks to the COVID-19 pandemic, the accelerator shifted to an entirely virtual format for Season 3. In the season's final episode, released this week, the panel of investors questioned the entrepreneurs on the valuations of their nascent firms as they sought to come to an arrangement over financing and ownership stakes.

It is this deal-making, or breaking, that provides the most tension and excitement of the four-episode run.

More than 40 fintech firms applied for seed funding or early-stage investments during the ScratchWorks Season 3 program.

Of those, only Act Analytics, Lifeworks and ReAllocate made the cut to take the stage, virtually, and pitch to the five ScratchWorks investors.

The outcomes, starting with Lifeworks

Lifeworks, which made its pitch during episode one, is a digital advisory platform being built from scratch and is led by advisor Ron Bullis. It connects the client experience across all segments of the wealth management process with the back-office operations of clearing, custody, compliance, billing and investment management.

During the final episode, some of the investors sought to lower Bullis’ $15 million valuation and the amount to be raised, most citing the strong existing competition Lifeworks would face from industry incumbents. However, the founder stuck to his guns and Mariner CEO Marty Bicknell got in the final word on funding the startup.

“Ron, Welcome to the Mariner family,” Bicknell said, giving his agreement to the $1.8 million at 12% of the company Bullis had sought.

During a follow-up interview with Bullis, he said the funding would be put toward staffing up, including the hiring of four stateside developers to oversee the continued day-to-day build-out of the platform.

One major set of components likely to be of particular interest to many smaller RIA firms seeking to grow will be the Lifeworks prospecting and lead generation tools. These tools take a very modern approach to the problem of prospecting, utilizing processes and proven third-party applications to manage, analyze and track campaigns built around social media and webcasts.

“We will do the prospecting and lead generation, handling most of the sales pipeline and then do a revenue share for a few years,” Bullis said.

“We spent 18 months, with two full time people and six figures of spend to figure this out for ourselves,” he said of the prospecting and lead generation features, “and we know most advisors won’t want to do it on their own.”

Making its appearance in episode two, Act has built an ESG analysis platform for the RIA channel that provides insights on thousands of publicly traded companies and funds across more than 200 environmental, social, and governance factors and simplifies both the research necessary and the values-based conversations advisors are increasingly having with clients.

Unfortunately, co-founder Mike Unwin, who has since left the company, could not convince the investors to go for the startup’s ask of $1 million for 10% of the company at a $10 million valuation.

While, as of press time the startup has provided no explanation for Unwin’s departure beyond “a parting of ways,” both Eusey and Nathanson were impressed with the platform during the fourth episode, though each in different ways. Eusey noted the technical prowess needed for a startup to tackle such a complex task, and Nathanson commented on the low, but potentially advantageous, pricing (for attracting advisors), but all the investors nonetheless agreed the current valuation was too high.

This led to a call for lowering of the valuation and amount of funding asked for from a couple of the investors, but, ultimately, an agreement could not be reached.

Co-founder and CEO Zachary Dan provided a demo of Act following the episode to WealthManagement.com. The intuitiveness of the interface, as well as the logic and transparency built into the platform, clearly come through.

The startup should not be counted out, especially given its partnerships of varying types (see our previous story), with firms that include Bloomberg, SS&C and Riskalyze.

“Really what motivated Act Analytics in my mind was that I was not satisfied with the solutions available, the ratings they generate tend to preclude a discussion about things other than the ratings themselves,” Dan said.

“I knew that in order to do that I needed to lay it all out for people to see, take this richness of information and data available and turn it into a rating that is intuitive and transparent, that tells a story.”

As but one example, he brought up a page that showed the level of diversity at a major public company. At a glance it displayed the percentage of women employees: 52.4% along with several additional metrics.

“In addition, you see executive diversity is really high,” he said, emphasizing “executive,” and proceeded to quickly do this with several other factors for the same company, in the same way an advisor would virtually share the interface and data with a client.

Things were not looking good for founder Adam Hooper as the final minutes of episode four ticked by. As with Act Analytics, many of the investors were enthusiastic about the potential of ReAllocate but were hung up on the $20 million valuation with calls to lower it. The session ended inconclusively with no deal being reached.

Then host David Canter of Fidelity Institutional reappeared speaking remotely with Hooper, who went on to explain that negotiations had continued off-screen and a deal had been reached.

“We are excited to announce that after taping concluded discussions continued and we now have a signed term sheet for the full $3 million ask with Marty [Bicknell] and his team at Mariner leading the charge; we are so excited to have access [to] the ScratchWorks investors, to have them as partners with us,” Hooper said.

In a follow-up interview, Hooper laid out his priorities for the funding, with making additional key hires topping the list.

“So much goes back to building the right team, from data scientists, to extending our reach into the RIA space but also project engineering and making integrations into those platforms advisors are already working on,” Hooper said.

He also described that a lot of the success he and his team had had with RealCrowd, the parent company (and former startup) of ReAllocate, was through education.

“We have a podcast that right now is more geared toward [RealCrowd’s] consumer investors and we are going to expand that to include a podcast specific to advisors with content for them on understanding why and how to create [real estate] portfolios.”

ScratchWorks is gearing up for its next season with applications now open for advisory fintechs. The team behind the endeavor, which is led by Bicknell and Mariner Advisors, will be back as will the accelerator’s other sponsors and partners, including Fidelity Institutional and the Leeds School of Business at the University of Colorado Boulder.