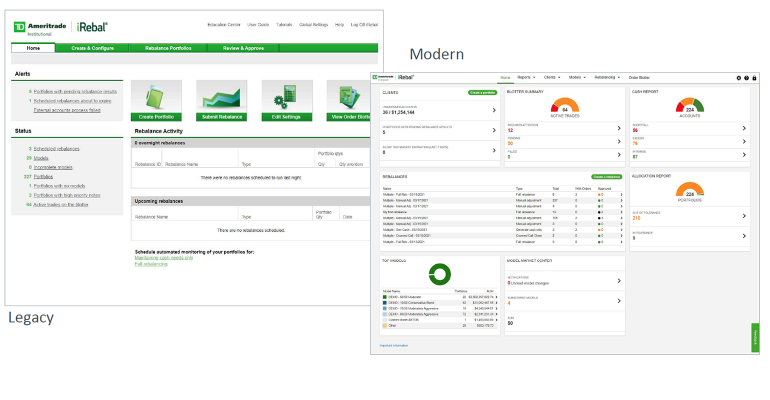 A side-by-side comparison of the Legacy and Modern iRebal dashboard.
Technology

Schwab executives hinted at the improvements during the custodian's annual Impact conference last week, the details and demos came to light for advisors and the media with the formal announcement.

In addition to the new interface are improvements to site navigation, editing and reporting features, as well as a Model Market Center widget. For now, iRebal is only available to advisors on the TD Ameritrade custody Platform. Schwab acquired TD Ameritrade in late 2019, and has spent the past two years merging the platforms.

The redesigned iRebal should be available to all Schwab advisors through the custodian's Advisor Center in mid-2023, "after completion of the clearing conversion," according to Jon Patullo, managing director, Digital Advisor Solutions for Schwab.

Two longtime users of iRebal said they were particularly impressed with the new dashboard view, which provides a summary of client portfolio information and prioritizes action items for advisors upon signing in.

“The landing page [of the dashboard] tells you all the info you need right off the bat ... and allows you to make that quick decision on a visual level and ask yourself ‘do I need to dig into something deeper?’ That ‘yes’ or ‘no’ just did not exist in the old view,” said Donald Capone, the main portfolio manager in the two-advisor shop of J.K. Financial, Inc. based in Dallas. In the older version, getting to that step required him to run a seperate query.

He said that the firm used the right term when calling the re-design of the interface a "modernization."

“It definitely looks like you would expect it to now—it’s doing the exact same thing we’ve been doing with it from the beginning but now it matches with what expectations are of what software should look like these days,” said Capone. That should make it easier for new users to adopt the tool, he said.

“It looks more inviting, less daunting,” he said of the new grid interface, which allows advisors to drill down more deeply right from the screen without losing their place and having to navigate back. There are also improved filtering features and simpler navigation, he said.

Paul Jackson, Lifestyle Asset Management, Inc. also found the dashboard the most compelling new improvement and noted the new cash and allocation report widgets that show whether the portfolio is out of balance at the start of the day.

“The second thing is that there was a lot of open space on either side [of the main view] and now it goes across the entire screen,” he said, noting that he and an associate at his firm, which has eight client-facing advisors and manages $350 million in assets, spend all day in the application, which he has used for almost a decade.

A screenshot of the new iRebal dashboard

iRebal, which has been an offering of TDAI since 2008, has gone from being a standalone on-premises installation costing advisors tens of thousands of dollars a year—depending on a firm’s size—to being free for the web version for any advisor affiliated with TDAI. Schwab first announced in 2020 that iRebal would be retained as part of its combined Schwab Advisor Services / TD Ameritrade Institutional advisor custody platform.

The improvements could prove to be a real draw for advisors starting out, according to J.K. Financial’s Capone.

“With the original iRebal you had to tell it every asset class, every sector, but then it was really exactly perfect to how you ran your practice,” he said.

“Now, out of the box it can assign everything [in a portfolio] and be 75% of the way there on day one, and get you to full functionality 10 times faster than before and then dial it in so much more quickly than in the beginning,” said Capone, whose firm had grown from $30 million when he and his partner started it to $175 million in AUM today.

With the new modernization, he said it is going to be easier for young advisors or small advisors to customize the complex rebalancing to her or his needs and “then you grow your practice around it.”

Lifestyle Asset Management’s Jackson said that ease of use was what most advisors want with their technology.

“In all reality, that’s what tech is for, if you put in the time at the inception and you test then you can have the trust it will do its job now and in the future.”