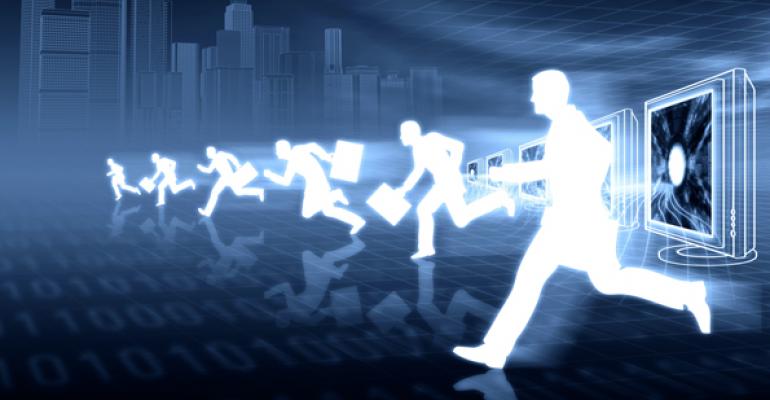 According to new data from Corporate Insight, online financial advisors increased their total assets under management by 11 percent in the first six months of 2015 to a total of $21 billion, even as markets remained relatively flat. Assets are up 34 percent since July 2014.

Some of the apparent slowdown can be attributed to a loss of assets on which clients receive paid investment advice but don’t give discretionary control. These assets dipped from $13.9 billion to $13 billion in the last months, but have increased 8.7 percent year-over-year.

But assets that clients give robos discretionary control over increased 57 percent over the last six months, and 116.2 percent year-over-year, to $8 billion.

The report also noted that because the first half of 2015 has been mostly flat for major domestic indices, the AUM growth for these automated investment platforms has primarily come from new deposits.

“This suggests that these leading fintech firms are winning customers’ trust, as investors are increasingly comfortable ceding control of their assets to a digital portfolio manager,” said Sean McDermott, an analyst are Corporate Insight who worked on the study.

Wealthfront CEO Adam Nash agreed with this conclusion and said almost all of the growth his company experienced has been from new investors and additional deposits. He disagreed that growth was slowing, saying July set a new record for new accounts on Wealthfront, and said the volatility in 2015 has actually helped show the value of Wealthfront's investment strategy and services like tax-loss harvesting.

"We recently published a blog post with performance data on this service and in the first six months of 2015 we generated an average of 0.81% in tax alpha for our clients," Nash said.

Joe Ziemer, the director of communications at Betterment, said it's true the company has seen a large number of new clients, and existing clients investing more, but disagreed that the broader market index should be an indicator of most of their clients' portfolio performance.

"Each of their goals have personalized asset allocations for whatever his [or] her goals are," Ziemer said. "We've certainly had client's with gains this year, but each clients returns will of course vary based on their particular goals' portfolios."

McDermott also said that $21 billion likely underestimates the amount, as Covestor was acquired by Interactive Brokers in April and ceased independent operations.

“New online advice solutions from both large and small firms deserve credit for helping create competitive pressure for lower costs, greater transparency on pricing and performance, and raising the bar in terms of website and mobile platform capabilities," McDermott said. "All of these developments benefit consumers.”

Corporate Insight will release the full study in September.