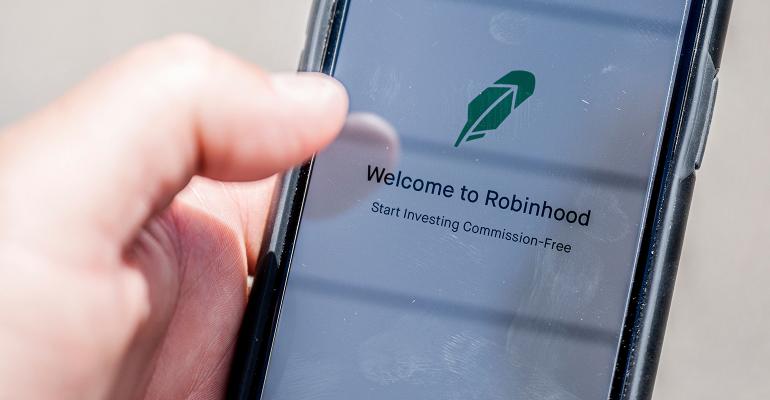 The company -- best known for commission-free trading of stocks and crypto -- has begun adding support for traditional IRA and Roth IRA retirement accounts, as well as pension accounts.

Robinhood Markets Inc. is nearing the launch of retirement accounts, according to evidence found inside of the company’s iPhone app, part of a bid to challenge traditional money managers and stock-trading platforms.

The company -- best known for commission-free trading of stocks and crypto -- has begun adding support for traditional IRA and Roth IRA retirement accounts, as well as pension accounts. Underlying code inside of a beta version of the Robinhood app was updated this week to include several references to the retirement accounts, according to findings from developer Steve Moser that were shared with Bloomberg.

The news helped Robinhood shares briefly pare their losses on Thursday, but the stock fell 7.2% to $13.51 at the close in New York.

The move is a key step toward competing more directly with traditional brokerages -- and one of several new features for Robinhood this year. Other money managers and brokerage platforms, such as Fidelity Investments and Morgan Stanley’s E*Trade, have offered such accounts for years.

Robinhood Chief Executive Officer Vlad Tenev has said previously that he’s aiming to roll out the retirement-account support by mid-year, without getting more specific. “Tax-advantaged retirement accounts are on the road map, and the teams are already hard at work to develop this functionality,” he said during an earnings call in January.

The code indicates that the app will support rolling over IRAs and making contributions, in addition to working with inherited IRA accounts -- ones that are passed down after a death. A spokesman for Menlo Park, California-based Robinhood declined to comment on the findings.

IRAs, or individual retirement accounts, allow users to invest as much as $6,000 annually to save on taxes. Traditional IRA accounts typically feature tax-deductible contributions, with those earnings not getting taxed until retirement.

Roth IRA accounts typically use after-tax dollars and don’t result in an immediate tax break, but they allow for tax-free withdrawals at retirement. Pension accounts, meanwhile, are provided by some employers -- though they’ve become less prevalent in recent decades.

Earlier this month, Robinhood launched a Cash Card that offers users cash back, bonuses and the ability to receive direct deposits. That feature, along with a mechanism to lend out stocks, new options contract features, crypto wallet integration, crypto gifting and spare-change investing, were all previously revealed in code findings reported by Bloomberg.