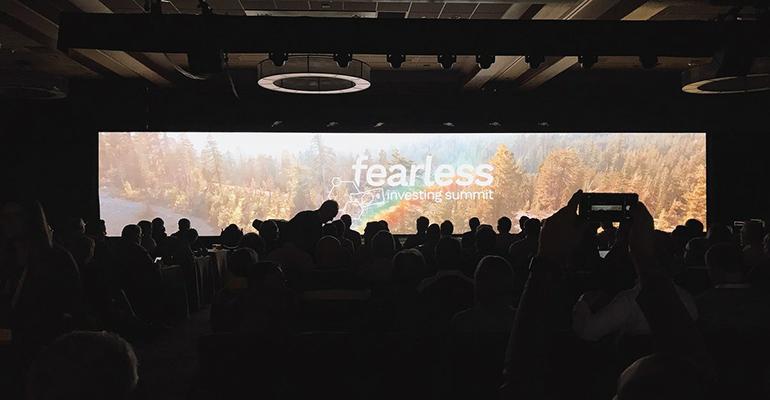 At its first conference, the risk-analysis tool took another large step towards providing end-to-end advisor technology.

“After going through the process of setting up a 401(k) for our own employees, we saw an industry in need of serious disruption,” Klein said. He attributed the rapid growth of his company to the so-called “fearless investing movement” of independent advisors offering fiduciary advice, and that moving into the defined contribution market was the obvious next step.

“This might sound schmaltzy but we really believe that it’s not normal for a tech company to come in and 4 years later serving 22,000 advisors,” he said, adding that Riskalyze has grown from 90 employees to 200 in the last year alone. “It’s our belief that we could have gone out and built integrations with 35 different providers for all the fragmented pieces, but we decided instead that what the industry needs is an end-to-end solution built around risk number.”

For those unfamiliar with Vestwell, whose CEO Aaron Schumm was recently named one of WealthManagement.com’s “Ten to Watch in 2018,” it's a technology firm that uses digital automation to make it easier and cost-effective for advisors to design, sell and administer 401(k) and 403(b) plans. The partnership with Klein allows advisors to generate 401(k) proposals within the Riskalyze platform, onboard clients and automatically align asset allocations with a plan participant’s unique risk tolerance (Riskalyze’s “Risk Number”).

Klein says Riskalyze remains a pure-play technology provider, while Vestwell is a licensed registered investment advisory firm that will assume ERISA 3(16) fiduciary responsibility on behalf of advisors and plan sponsors. Vestwell will also have licensed representatives on hand to assist users in designing retirement plans.

Vestwell will add its investment strategies via the Riskalyze Autopilot Partner Store, the digital advice product launched in August. Eventually, the idea is to let other asset managers on the Partner Store offer their own products in retirement plans developed with Riskalyse’s Retirement Solutions.

Klein also announced additional strategies from American Funds’ and Dorsey Wright’s coming to the Partner Store and a new ability in Autopilot to split single investment accounts across multiple asset management strategies. But he still insists that the company cannot be labeled a turnkey asset management platform.

“No no no, a TAMP in my view is a firm that is executing trades on behalf of advisors and is actually doing asset allocation,” Klein said, adding that Riskalyze is simply the technology provider, not a licensed advisory firm. “With Autopilot, we’re just surfacing the right trades at the right time that the advisor might want to take.

Klein also introduced a number of enhancements to the core Riskalyze product. The company is expanding its portfolio analysis tools to let advisors compare multiple portfolios, indexes, benchmarks and individual securities across any market timeline. Advisors can use the tool, called Scenarios, to set custom date ranges, display historical visuals and include a forecasted stress test. Scenarios can be saved and reused for client meetings.

To help advisors with all of the new features, Riskalyze is launching a new training program called Riskalyze Academy to help advisors adopt the company’s ever-expanding products and services.