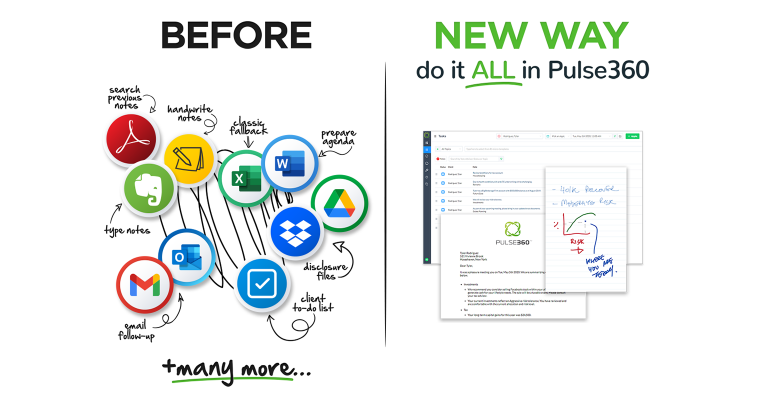 Startup Pulse360 has launched automatic task creation whereby emails or other triggers can in turn set off the creation of a full task in an advisor’s CRM or initiate communication with clients or prospects.

It is meant to help financial advisors avoid what has traditionally been double work, when it comes to remembering to send emails or creating or updating fields and entries within their CRM.

Specifically it can automate the manual task of creating, well, tasks within the popular Redtail and Wealthbox CRM systems. Advisors can take their notes within Pulse360, such as a prospect or client meeting and then attach a “task” to it—creating an email to the client with a plan or other documents or trigger an onboarding package, for example.

Powering these abilities are the deep integrations that Pulse360 has with the two CRM applications that are also bidirectional, meaning an update of a field in the CRM will occur in Pulse360 and vice versa.

According to founder and CEO Anand Sheth, the feature is coming soon to Salesforce, followed by Junxure and Advyzon.

Pulse360, which has been in development for three years, officially launched earlier this year and presently has 70 paying advisor firms using it, Sheth said.

“While CRMs have workflows, someone has to manually activate them,” Sheth said in response to criticism that features like this have existed in various CRMs for years. “Our take is totally different; why not automate creating and/or triggering them based on your meeting note you entered into our system? A sort of ‘If this, then that’ implementation.

“As far as I know, there are currently no other systems that do what we do, all in one package,” he added. “We have literally combined multiple applications into one to create a meeting notes system for advisors that just doesn't exist elsewhere.”

“Automating communication with clients and now automating daily work has never been easier with the deep two-way integration between Pulse360 and Redtail CRM,” said Brian McLaughlin, CEO of Redtail Technology, in a statement announcing the rollout.