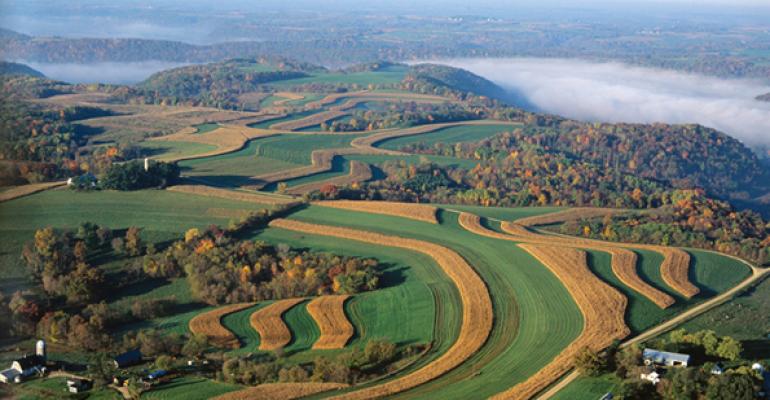 Planning for Farm Operators and Investors in 2013

Agricultural land and commodity prices and the Applicable Exclusion increase

The internet furnishes a number of websites discussing the economics of agricultural land and commodities.  Planners with clients who are farm operators or farm investors should be alert to the significant increases that have occurred in farm land and commodity prices and the resources available on the internet for following and charting these critical value structures.

The land market through 2011 is discussed and graphed by the USDA Economic Research Service at Farmland Values on the Rise: 2000-2010.   This study points out that states in several regions experienced double digit annual growth in the period studied, with particularly high growth from 2010 to 2011 in Midwest regions.  The Kansas City Federal Reserve Branch’s  Survey of Tenth District Agricultural Credit Conditions reflects double digit growth in land value from 2000 to 2013 in the Tenth Federal Reserve District in Chart 4 for the 2nd quarter of 2013.  It also includes a chart for Kansas, Missouri, Nebraska, Oklahoma and the Mountain states reflecting growth for the district from 2012 to 2013 in Nonirrigated (18.3 percent), Irrigated (25.2 percent) and Ranchland (14.4 percent).

Nickerson, Morehart, Kuethe, Beckman, Ifft & Williams’ Trends in U.S. Farmland Values and Ownership (EIB-92, February 2012) reports that in the last few years, U.S. farmland values have been supported by strong farm earnings, that farmland values rose faster than housing values and declined more moderately during the recession and that, a speculative bubble in farmland prices can’t be ruled out.  Commodity prices, the price outlook for individual commodities and world supply and demand factors are analyzed at the USDA’s Economics, Statistics, and Market Information System.

The Farmers National Company’s analysis of the land market stated, as to the 2012 farmland market, that:

Farmers National Company has seen record auction activity during the last six months as more properties are being sold at auction to maximize profits. The tight supply of quality land has also prompted buyers to look at less productive land that can be upgraded.

Strong grain prices are boosting profits for farmers, prompting them to pursue land in order to expand operations. In addition, cash rents in top production areas have increased 25% to 40% for 2012.

The Farmers National Company’s Regional Land Value Reports for 2013 indicate that the land market continues to be strong, based on the factors of low availability of land for sale, continuing high product prices and low interest rates, with many areas showing 25 percent to 30 percent increases from 2012 to 2013.

The increase in commodity values has resulted in a corresponding increase in farm income.  The USDA Economic Research Service’s Farm Household Well-being web page states, “… households associated with commercial farms derive the majority of their income from farming activities.… Their median income from farming increased by 7.9 percent in 2011 to $84,649, and their total household income also increased by 7.9 percent, to $127,009.”

Gilliam, in Some U.S. farmland values surge more than 25-pct –Fed (Reuters Aug. 15, 2013), reports that demand for farmland remains strong, despite a decline in farm income in the Midwest and Mid-South and quoted the Federal Reserve Bank of Kansas City that farmland values may have peaked.  See, Uscher, Investing in Farmland: Is a Bubble Brewing? (Money Morning).

The Tax Policy Center has published a summary of estimates of estate tax returns filed for 2010 decedents.  This summary reflects 573 returns with farm assets in the $3.5 million range and 1,731 returns of over $5 million in farm assets.  These statistics seem to indicate that a relatively small percentage of farm and ranch clients have estate tax exposure.  However, rural land values are booming in many areas and estate planners must take into account the possibility of value increases leaving farm owners exposed to the estate tax or edging the farm estate into taxability, even after 2012.

The federal estate tax applicable exclusion was fixed by ATRA 2012 at $5 million for 2011, with inflation adjustments thereafter.  The increase in land value has, in many areas, almost kept pace with the increase in the Applicable Exclusion.  Increasing land prices will mandate careful estate tax planning with continuing application of the traditional gifting and value control techniques in many client situations.

Bear in mind that, as long as Congress meets, the “permanent” applicable exclusion and estate tax rates fixed by ATRA 2012 are subject to revision, as discussed in Aucutt, Capital Letter No. 33, The Administration’s Fiscal Budget Proposals, at https://www.actec.org/public/CapitalLetter33.asp.  The Budget Proposals, as reflected in the Treasury Department’s Greenbook, formally known as the General Explanations of the Administration’s Fiscal Year 2014 Revenue Proposals, at pages 138-139, calls for the Applicable Exclusion to be returned to the 2009 levels of $3.5 million for estate and GST taxes and $1 million for gift taxes beginning in the year 2018 with no indexing for inflation and a tax rate of 40 percent.  The client should always be cautioned that politics is uncertain, action of this type by a future Congress is possible and basic estate tax planning should continue to be part of the client’s estate plan.

Given the lack of impact of the federal estate tax on some previously taxable estates, planners may need to shift their focus to the effect of the higher income tax rates set by ATRA 2012.  Planning for achieving the maximum step-up in basis of family assets at death will become an area of importance.  Business entities that were designed to result in value adjustments that mitigate the impact of the federal estate tax may no longer be necessary and, in some family circumstances, should be eliminated.  Such entities reduce the step-up in basis at death because of the discounted values of the decedent’s interests in them and provide only a step-up in the basis of the entity interests, rather than that of the individual assets.  In the case of depreciable property, such individual asset step-up in basis results in immediate income tax benefits.  Another change will be that life insurance purchased for the purpose of funding estate tax may deserve reassessment from the income tax planning standpoint.  The effect of ATRA on income tax planning as part of the estate plan and other suggestions for estate planning after ATRA are discussed in Babitz, Estate Planning After ATRA: A Summary of the Heckerling Institute on Estate Planning (March 2013).

For planners counseling farmland and commodity investors and planning for farm operators, the internet offers great background and valuation material.  Don’t forget, however, that when dealing with farmland and farm operators, rural culture is involved, and it’s not all about money.

Trusts & Estates magazine is pleased to present the monthly Technology Review by Donald H. Kelley—a respected connoisseur of the software and Internet resources wealth management advisors use to further their practices.

Kelley is a lawyer living in Highlands Ranch, Colo., and is of counsel to the law firm of Kelley, Scritsmier & Byrne, P.C. of North Platte, Neb. He is the co-author of the Intuitive Estate Planner Software, (Thomson – West 2004). He has served on the governing boards of the American Bar Association Real Property Probate and Trust Section and the American College of Tax Counsel. He is a past regent, and past chair of the Committee on Technology in the Practice, of the American College of Trust and Estate Counsel.

Trusts & Estates has asked Kelley to provide his unvarnished opinions on the tech resources available in the practice today. His columns are edited for readability only. Send feedback and suggestions for articles directly to him at [email protected].