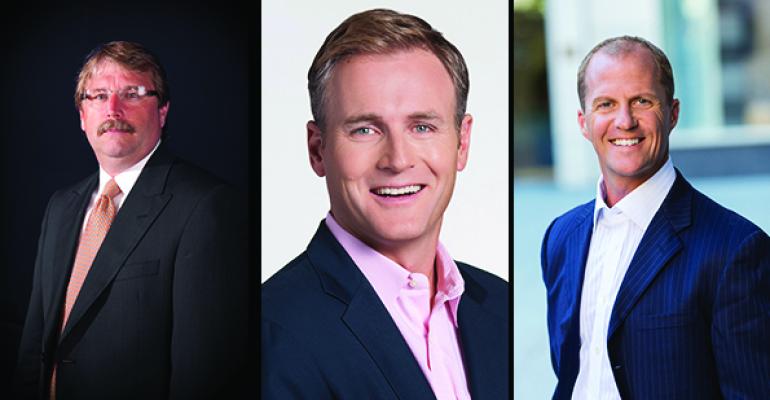 Newly Acquired Advent to "Double Down" on Advisor FinTech

​Norm Boulanger, president and chief operating officer of SS&C, Pete Hess, CEO of Advent Software, and Dave Welling, senior vice president and general manager of Advent's Black Diamond talk about the reasons behind SS&C's acquisition of Advent and their plans for the future.

WealthManagement.com: What were the goals behind SS&C’s acquisition of Advent?

Norm Boulanger: [The Advent deal] wasn’t just a target because we wanted to get into the wealth space. What we know is that there’s some growth opportunities in the advisor space, investment advisors are growing, so you need to be a position to take advantage.

If you look at the history of our company, when quality organizations become available, you need to be in a position to take advantage of that. We’re very comfortable that we can accelerate the opportunity in that space. It’s crowded, but we’re one of the bigger players, one of the more capable players and we think we’ll get more than our fair share of the opportunity.

What happens to Black Diamond and Advent Axys under SS&C's new management?

NB: We didn’t buy Advent for a specific product. We bought the organization and the capabilities of this whole company. We’re very focused on Black Diamond. We have tremendous sales potential. We’re going to double down on that. You’re going to see us invest more in sales, we’re going to look at building out more technology functionality that will round out our suite of solutions in that space and if acquisitions are available that will complement that technology suite, we’ll consider them. So we’re back in this business and it’s going to be a great opportunity for us.

Pete Hess: It’s a net positive. As an independent company, and a public company, we had directives in the ways we delivered shareholder value that were pretty margin-focused. And so while we’ve been making investments in Black Diamond and things like that, SS&C has a much more aggressive growth charter for us.  Buying a company to add to the footprint, or things like that, is harder to do as an independent Advent than it is now as part of SS&C.

Where are you seeing opportunities for these next acquisitions?

NB: We’ll build a lot of what we think we need, but if something becomes available that solves that problem faster, we’ll consider acquiring it. We have to build the capability that our customers want in order to sell it. We’re indifferent on whether we build it or buy it—it’s having the capabilities that is most important.

Dave Welling: We announced the Link program, and obviously that’s a strategy with a handful of well-respected partners that do things we don’t do. Ultimately, the advisor just wants the stuff to work together. Advisors need an architect, and a general contractor. That means you do some of that work, but it also means you sub-contract some out.

There’s been some consolidation in the financial technology space, particularly around robo-advisors and back office operations. Do you think that will continue?

PH: I think back to the hedge fund market from 2000 to 2008. It was the hot market, a lot of new technology companies were built and everything new was focused there. You had all these companies come out of the woodwork. And eventually everyone is trying to win, build scale and create a good business. But ultimately, the market was overcrowded and unsustainable and the winners ended up buying the losers. In the advisory space, we’re in a similar situation. Ultimately though, to run a great software business, you need about 500 clients. There aren’t enough clients to go around to get that, so there will be companies that end up getting bought because they couldn’t quite tip the scale. We’re past that scale, so we’re one of the safer companies. In think it’s just a natural cycle.

DW: There’s been in this boom of innovation in wealth management financial technology. A lot of  really great, interesting tools, some of them are point solutions that solve a very particular problem. Advisors are struggling to put all the pieces together and having to go to different stores to do their shopping. There is no Best Buy equivalent. They’re missing the Geek Squad.

Whenever you are observing an industry where so much innovation is happening, you need to look at the kernels of that innovation that really struck a chord. What we’ve seen in the robos, advisors need to provide their clients with a digital experience because clients have a different expectation of how they want to engage with their advisor. The yellow pad of paper and ‘come to my office’ days are ending. But I think over time, the robo advisors will just become a segmentation tool that advisors are going to leverage in order to build a pipeline of clients, who over the long term are going to want the services the advisor can provide but the robo does not. There’s a ceiling to the size of client that the robo is going to be able to service and then it’s going to go to an advisor.