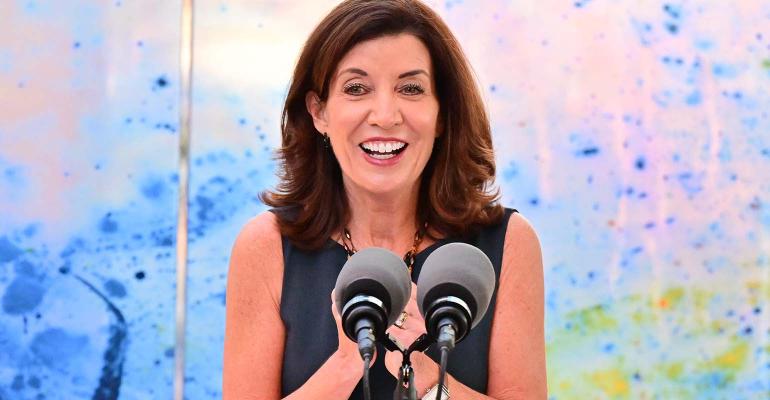 New York has become one of the biggest crypto-mining hubs after China banned crypto mining last May.

(Bloomberg) -- New York Governor Kathy Hochul has signed one of the most restrictive laws in the US on regulating cryptocurrency mining, becoming the first state to impose such a ban.

The bill triggers a two-year moratorium on new permits for crypto-mining companies that are powered by fossil fuels and use proof-of-work authentication methods, with millions of computers, to validate transaction data. That earns the companies rewards in the form of the token from the blockchain network.

The Bitcoin network relies on proof-of-work authentication. Billions of dollars have been invested in Bitcoin mining operations and the energy consumption for such operations can equal that of an entire nation.

New York has become one of the biggest crypto-mining hubs after China banned crypto mining last May. Miners have flocked to the state because its low energy costs and cool climate induce higher productivity for the mining operations. But activists have increasingly highlighted the environmental costs of such activities.

“I will ensure that New York continues to be the center of financial innovation, while also taking important steps to prioritize the protection of the environment,” Hochul said in a memo issued late Tuesday. “It is the first of its kind in the country and a key step for New York as we work to address the global climate crisis.”

The two-year moratorium comes as the crypto industry faces more scrutiny from regulators following the bankruptcy of the crypto exchange FTX. The sudden fall of FTX has sent shock waves and fears of contagion through the crypto market, with Bitcoin temporarily falling below $16,000.

The bill was approved in June by the state Senate but Hochul didn’t sign it until after the governor’s election was over. Facing fierce lobbying against the proposal from the cryptocurrency industry. Hochul had said during an October gubernatorial debate that she was “looking at that bill closely,” but didn’t outright say she would sign it.

“For too long the state’s dramatically energy-intensive mining facilities, whose massive carbon footprints exacerbate climate change, have had little oversight,” said Richard Schrader, the New York Legislative and Policy Director for the Natural Resources Defense Council. “Not only does crypto take a toll on the environment, but communities in upstate New York could suffer as once-abandoned coal power plants come back from the dead as ‘zombie plants’ that mine crypto all day, every day.”