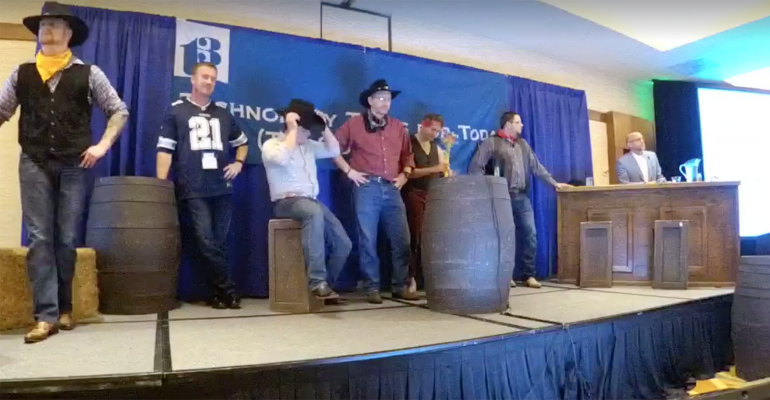 Day two of the Technology Tools for Today (T3) conference, the industry’s largest gathering of the advisor tech community, opened up under foggy Southern California skies with Orion Advisor Services announcing the launch of their next generation “Eclipse” trading platform.

“Eclipse goes beyond trading and rebalancing to provide advisors with an integrated platform to not only drive efficiencies, but to also create “tax alpha” for clients,” noted Orion CEO Eric Clarke.

The addition of Eclipse provides advisors with unprecedented computational horsepower. According to Clarke, “We built Eclipse on the Amazon Cloud so that every morning, custom workflows are calculated from one dashboard. This enables advisors with the critical information they need such as what to trade, what to query on, and what are the outlier accounts immediately—saving them from having to review accounts one at a time.”

Orion’s Eclipse lets advisors customize and automate trade and rebalancing requirements at the household and account level, as well as by sleeves, asset categories and sectors. The tax loss harvesting requirements can be tailored to specific households, and advisors have the latitude to increase or decrease tax sensitivity and assess gains.

The release comes at a period of rapid growth for Orion, with assets under administration at the firm growing more than 45 percent last year, crossing $400 billion.

Taking a page out of the infamous skit-style presentations at past T3’s from MoneyGuidePro’s Bob Curtis, Clarke and his team incorporated a Wild West presentation style, complete with an elaborately decorated stage to entertain the audience while regaling them with the new capabilities.

Continuing the theme at this year’s conference—"robos are your friends, not your enemies"—was a lively panel discussion hosted by Jemstep, a pioneer in the robo platform space.

Simon Roy, President of Jemstep, shared the history of the firm’s digital transformation from being an online platform for consumers founded in 2008, to becoming the advisor-focused platform today that was recently acquired by Invesco. “We’ve been involved in the digital advice world for nearly ten years and have seen an incredible evolution over that time, but I still feel we are only in the second inning of a much longer game.”

Joining Roy on the panel was Dan Skiles, President of Shareholders Service Group (SSG), a fast growing RIA custodian. Skiles announced this morning that SSG will be providing the 1,500 RIAs using SSG as their custodian access to Jemstep Advisor Pro.

A former technology executive at Schwab Advisor Services, Skiles told advisors they needed to take an aggressive approach when deploying new technology. “If you’re not breaking things, then you are not making progress,” he said. Advisors need to get over their fear of altering existing processes or beliefs in order to modernize their firms.

It also doesn’t hurt to make some noise, according to Roy. He said it was important advisors make a deliberate effort to market the new technology to clients and prospects, noting that, “If you build it, they will not come” without support.

The intersection of technology with regulation and compliance was also a hot topic at the conference. Brian Hamburger, CEO of Market Counsel, a compliance-consulting firm, emphasized the dangers of cybersecurity, both as a threat from outside the firm, and as a subject of increased regulatory scrutiny. “Cybersecurity is actually not a regulatory issue,” Hamburger said. “However it is an important area for regulators to focus on based on the high profile nature of hacks we have seen.”

Hamburger pointed out that while there are no specific rules around cybersecurity, regulators are interpreting aspects of Regulation S-P—the privacy mandate from the Securities and Exchange Commission that requires investment advisors to “implement reasonable safeguards to protect client data.”

What is reasonable? “That is open for interpretation with 20/20 hindsight by regulators,” Hamburger cautioned.

His advice is to educate and train employees to practice “good internet hygiene.” Teach them to understand what data is considered sensitive and how to protect it, bring in outside consultants to test networks and diligently review all vendors and contracts.

Rounding out the afternoon of Day 2 were 20, nine-minute “flash” sessions running concurrently on multiple stages. Attendees were challenged to identify which vendors participating in the conference they were interested in learning more about, while trying to interpret the real meaning of industry jargon such as “We are a complete wealth management platform.”

Interspersed through the cacophony of tech demonstrations was a thriving exhibit hall that featured craft brew tastings.

Concluding the evening festivities was the “FinTech Air Affair” for conference attendees held at the Hangar 21 Helicopters in the heart of Orange County, sponsored by a consortium of technology companies including Advicent, LaserApp, Morningstar, Redtail, Riskalyze and Black Diamond, and featuring helicopter rides, open bars, live DJs and more.

To stay up on all of the action check out tweets on the Twitter hashtag #T32017.

Timothy D. Welsh, CFP® is President and founder of Nexus Strategy, LLC, a leading consulting firm to the wealth management industry, and can be reached at [email protected] or on Twitter @NexusStrategy.