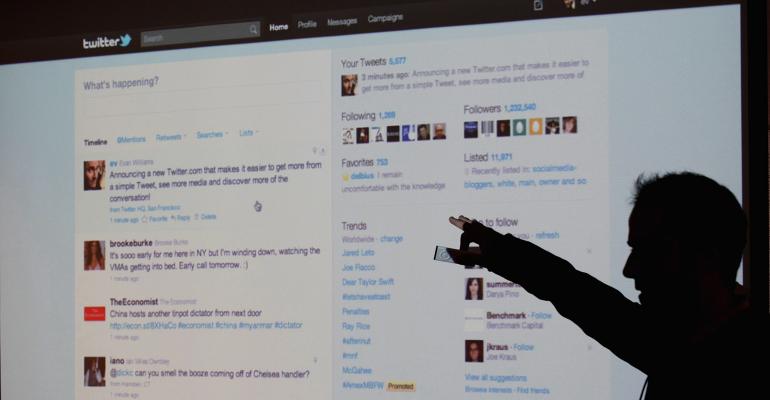 Social media is about to be much more important for financial advisors, and not just as a content marketing tool or way to interact with millennials. It could soon play a large role in the fundamental research advisors rely on to make decisions for their clients.

LikeFolio, a technology that uses social media data to produce investing intelligence, is licensing its Brand Mapping Database—a complete map of every brand and product owned by publicly traded companies. Businesses can use the license to expand their search capabilities beyond ticker symbols. For example, a search for Tide laundry detergent will directly tie into Proctor & Gamble’s listing on the New York Stock Exchange.

Because LikeFolio is built around Twitter’s data fire hose, the Brand Mapping Database takes in mentions for all of these brands to track consumer sentiment (both positive and negative), purchase intent, and news articles. The program can even account for natural language slang, so if thousands of people start discussing tweeting “#TideSucks,” LikeFolio can provide intelligence on what the impact could be for shares of PG.

According to LikeFolio founder Andy Swan, this gives financial institutions insight into “what consumers are doing on Main Street before it hits Wall Street.”

“[LikeFolio] can greatly expand a firm’s ability to use alternative data sources for fundamental research,” Swan said. “If they have an influx of news articles and they are searching for company names or ticker symbols, they may be missing talk or chatter around specific companies that may be trending in the market.”

Swan says LikeFolio is licensing out the Brand Mapping Database in response to interest from institutional investors, hedge funds, quant analysts and even some financial application companies looking to add new data to their portals (Swan didn’t want to name specific companies on the record, but said deals will be announced soon). Firms can plug it into whatever existing data feed they have, adding in mentions not just from Twitter but sites like Reddit, Facebook or LexisNexis.

So while some registered investment advisors currently use LikeFolio’s general product, Swan said social media insights found gathered from the Brand Mapping Database will very soon be playing a much larger role in the fundamental research RIAs consume.

Swan also believes we are nearing the peak of passive investing, and firms will be turning to companies such as LikeFolio for new ways to generate alpha as the markets become more bearish and volatility increases.

“It’s easy to be a passive investor when the markets go up every day and the VIX is at 11,” Swan said. “When the VIX goes to 21, everything starts moving wildly and not everything is going up. That’s when real professionals with real data will shine.”

But the question is if social media data is actually a good source of market intelligence. Just because a few thousand people tweet about wanting to buy the next iPhone, does that really translate to Apple stock performance?

To prove its effectiveness, LikeFolio provided four years worth of its social media data and sentiment scoring to Vicki Tang, an associate professor in account at Georgetown Unversity’s McDonough School of Business, for a study on the “predictive power” of social media. Tang found that while Twitter is useful in predicting fundamentals, most analysts ignored it.

LikeFolio has been proven in the real world as well. TD Ameritrade used LikeFolio to analyze social media sentiment and volume to determine which companies got the most ROI from their Super Bowl ads. And after most analysts were bearish on Chipotle following some negative news in December, LikeFolio used social media data to recommend that Chipotle would turn things around in 2017. Since then, the company’s shares have climbed 13 percent.

Howard Lindzon, the co-founder of StockTwits, said it’s a difficult business trying to package and sell social media data, but it can be really helpful if done correctly. Lindzon said that he prefers to find investment opportunities in markets and companies that no one is talking about yet, but that social media may have “the biggest impact ever” on professional investing, especially if active management comes back in vogue in the next market cycle.

“You can see what’s happening as people connect brands and ticker symbols,” Lindzon said. “I can look at a stream all day and get tons of alpha, but I don’t know how to package that and resell that.”

“They can suck it in and repackage it into their terminal," Lindzon said. "When they charge what they do, its important to have all these sources.”