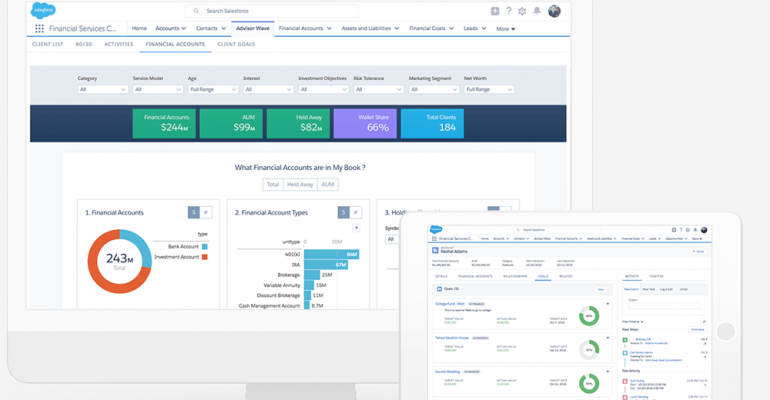 An independent researcher commissioned by Salesforces quantified the benefits of one firm's experience implementing the cloud-based CRM.

As a business owner, return-on-investment is usually near the top of every independent advisor’s mind; this is especially true when it comes to technology. Without being able to quantify ROI, cost ends up being a major barrier to firms embracing new tools.

Even after the advisor decides to make the investment in technology, an increasingly crowded market of wealth management technology products — with massive variation in functionality and cost — makes the decision even more difficult. For example, should an advisor shell out money for a more-expensive product that’s loaded with features, or save with a product from a smaller startup?

To help advisors with the ROI problem, Salesforce, the San Francisco-based tech giant behind one of the most feature-filled and expensive CRM products available, commissioned a study of one independent firm’s experience adopting the Financial Services Cloud. The study, done by Nucleus Research, concluded that adoption of Financial Services Cloud created a 147 percent ROI for an average annual benefit of $972,091.

The firm in question is Trilogy Financial, a privately held financial planning firm headquartered in Huntington Beach, Calif., with $2 billion in client assets. The firm has 11 branch offices across the U.S. and just over 100 advisors.

Trilogy had been using a proprietary CRM it custom-built, but needed something that could keep up with new compliance requirements, be easily adopted by its network of independent advisors and be updated and managed on a centralized basis. Nick Richtsmeier, Trilogy’s executive vice president of business development and the COO of Trilogy Capital, the firm’s RIA arm, said it had a good experience with Redtail, but needed more robust functionality that could be used by support staff and portfolio managers in addition to advisors.

The company began deploying Financial Services Cloud in September of 2016, working with Salesforce consulting partner Red Sky Solutions, and went live this January. Richtsmeier said the bulk of training was around helping advisors understand how to integrate Salesforce into their workflows, and compared it to “retrofitting a 100-year-old Victorian mansion with modern appliances.”

The quantify ROI Nucleus factored in the initial and ongoing costs of Salesforce’s subscription fees, consulting, personnel and training over three years. It also quantified direct benefits, such as the reduction of third-party support costs for Trilogy’s old CRM and document scanning costs, and indirect benefits like the increase in employee productivity.

Here are the results after three years. “Although Trilogy is still in a relatively early phase of adoption of Financial Services Cloud, it has already seen returns by automating processes — such as client intake — that were previously manual,” Wettemann wrote in her analysis. She added that Trilogy would have spent twice as much to get the same functionality from Salesforce’s basic product, and 25 percent more for ongoing Salesforce administrator resources for the additional customizations and integrations Trilogy utilizes.

Of course, the results should be taken with some grains of salt. Not every firm can afford Financial Services Cloud, nor can they take advantage of all the CRM’s functionality. For smaller firms, a product from Redtail, Junxure or Grendel could be more appropriate.

Second, Salesforce did pay for Nucleus’ research. However, a spokesperson said Nucleus had “very strict rules about Salesforce’s involvement,” which ended after it asked Trilogy if the firm would be interested in participating.

Richtsmeier says he's confident that ROI was better with Salesforce than it would have been with other CRMs because of functionality built into Financial Services Cloud, such as householding and account integrations. “[Salesforce] made it really easy with our existing systems,” he added. “We got live data feeds on day one that were substantially better than others that would have taken a lot more money.”

“What it would cost to take a basic CRM shell and turn into what we are using Salesforce for would have been astronomical,” Richtsmeier said.