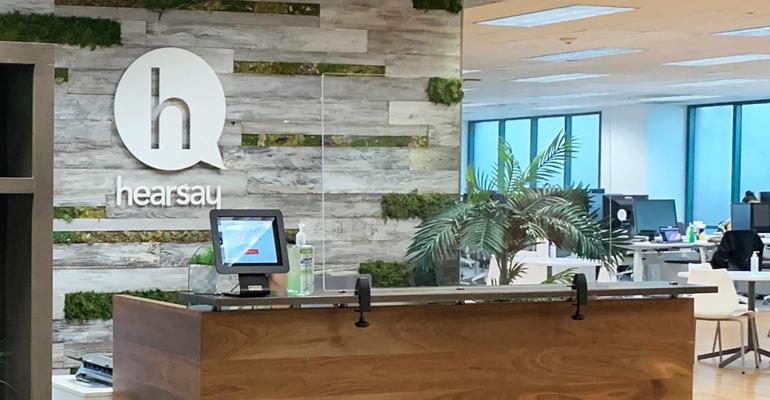 Hearsay Systems is releasing a video prereview tool for compliance departments overwhelmed with the volume of advisor videos.

Digital compliance software developer Hearsay Systems is launching a “prereview” video compliance tool, according to an announcement. The new software scans the videos of financial advisors, converting speech to text and looking for imagery that could violate company rules. Compliance officers must still ultimately sign off on the video, but the system is designed to automatically flag potential issues, saving officers time and effort.

“Compliance officers and compliance teams are getting a more effective way to do supervision without having to augment teams massively and also without replacing those teams,” said Iain Duke-Richardet, vice president of compliance strategy at Hearsay Systems. “This is an additional tool in their arsenal.”

Built on Amazon Web Services, Hearsay’s software converts speech to a text file, which it then reviews and provides to the user. It’s also programmed to flag images with categories like “nudity, violence, visually disturbing content and rude gestures.” Compliance officers can click on the flag and the software will jump to the image and audio of the potential violation, saving the officer the time it takes to manually review videos one by one.

But the system has its limits. If an advisor holds up a whiteboard that instructs viewers to make a trading decision, such as to short a stock, but does not mention the instructions verbally and there is no violent imagery or references to profanity or weapons, the system will not flag that particular scene, cautioned Duke-Richardet. “The intention is certainly not to be perfect,” he said. “It's really to identify the risks that video presents in a more consistent and effective manner, such that compliance teams are then able to scale.”

The firm is “exploring that [scenario] for our roadmap,” according to Hearsay spokesperson Vivien Wang. “Today, the system is capable of detecting primary risks that customers have expressed concern about with the use of video, namely suggestive content, weapons, drug and alcohol use, profanity and hate symbols.”

Software-based speech-to-text capabilities, which many advisors are familiar with from auto-captions on YouTube videos or Instagram posts, is also not 100% accurate. Accents, industry vocabulary and slang can throw those algorithms off. Hearsay is attempting to limit situations like that by using software systems designed for financial services and further customized, said Duke-Richardet.

Hearsay said its text analysis technology has produced, on average, an 80% reduction in time spent reviewing or preapproving content. It expects its video prereview tech to reduce time spent on similar processes by more than 50%. The time savings could be a big boon for compliance departments, as advisors increasingly turn to video to connect with clients and potential clients.

The new video-oriented service will be available to customers via the Hearsay platform, as part of the vendor’s existing offering.

"It's an interesting concept," said Jud Mackrill, CEO of integration as a service company Milemarker and former CMO of Carson Group. "My hope for this is that it helps speed up content creation for wealth management at large."

"There's a lot of cool things happening in terms of video," Mackrill added, noting that videos aren't just shared on social media, but are a part of text message conversations and email exchanges. Hearsay's combination of speech-to-text and imagery scanning is unique, he said.

While Hearsay may have early-mover advantage on the prereview of combined audio and visual, it isn't alone in its text scanning abilities. Text messaging between clients and advisors has been around for years, and firms like Redtail Technology and MyRepChat have tools for ensuring compliance using those mediums of communication. RIA in a Box, recently acquired by ComplySci, offers email and some social media review for RIAs.

Developing or acquiring automated solutions for pre- and post-review of financial services client communications is nothing new for Hearsay. It rolled out a largely automated texting review offering in December 2019 as a component of its Relate platform.

Hearsay, works primarily with enterprise financial services organizations that include insurance companies and large wealth management firms, among them Allstate, Charles Schwab, Morgan Stanley and New York Life. The company reports that its offerings are used by more than 170,000 advisors and agents throughout the financial services industry and it has expanded into 22 countries.