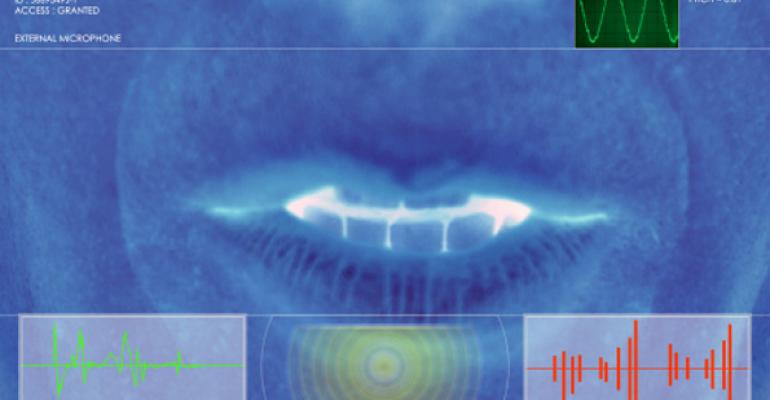 Emailed confirmation codes and oddball security questions are quickly becoming a thing of the past. Some firms are already using a client’s voice as the ultimate password.

When a client of Barclays Wealth & Investment Management calls to speak with a banking representative, they’re often greeted with friendly conversation—a question about their day or the weather. Innocuous chatter? Hardly. That’s Barclays way of running a voice print on the client—and passing them through security.

“All we need is 10 to 15 seconds of audio, which clients normally provide as we talk with them,” says Iain Hanlon, Barclay’s head of change delivery based in Glasgow, Scotland. “Then we identify them rather than have them go through a lengthy painful process, with two or three additional questions they might struggle to answer.”

Voice prints, finger scans, iris readings and DNA are all ways to identify an individual by their unique personal characteristics. Long ago these were the elements of spy movies and superhero flicks. Today, biometrics are being used by hospitals and amusement parks as well as financial services firms across the globe, and adoption appears to be growing.

Vanguard, Barclays and Schwab are just three financial services firms confirmed to be using biometrics today—at least in the early stages. Their goal is to reduce fraud and hacking and smooth down the ruffled feathers of clients long irritated by having to repeatedly recite passwords, their mother’s maiden name and the name of their first school.

“We’re at proof of concept around voice and touch,” says Neesha Hathi, senior vice president, advisor technology solutions at Charles Schwab. “I didn’t realize how unique voice is. I think this is a huge opportunity in coming up with ways to authenticate. Not only is it easier for clients, but it’s also more secure.”

Apple’s recent fingerprint scan technology has put biometrics into the hands of any consumer willing to pay-up for a new iPhone 5. But device dependent biometric systems, like a fingerprint scanner or an iris reader, are often less favored by businesses, because it would mean their clients are required to be physically present or have a scanner to be authenticated—an expensive proposition.

A client’s voice is transmittable by phone, a device that nearly every consumer already owns. That’s one reason why voice biometrics is appearing as a favored security option among financial services. The audible fingerprint—or what’s called a voice print—can be broken into multiple data points based on tics or speech patterns. These data points can discern and authenticate an identity regardless of whether someone is calling from a home phone, pay phone, mobile phone or Internet phone.

Systems can even tell if a voice is being played back from a recording or occurring live. Call centers sometimes have callers recite non-sensical phrases which could not have been previously recorded.

When used with other security information, such as repeating an account number which clients need to provide anyway, they prove to be extremely accurate, experts say.

“With Barclays, when they call a financial advisor, their utterances can be used in the background to turn around a confidence that the voice corresponds with a claimed identity,” says Dan Miller, senior analyst with the San Francisco-based Opus Research, which has covered voice biometrics since 2002. “In Australia, they have clients repeat a phrase or recite something in random order to authenticate them so bad guys can’t really steal [a record voice.]”

Schwab’s Hathi seems to feel comfortable with the security of voice biometrics today. That’s a reason why the company will be researching and evaluating potential voice technologies this fall. But first Hathi wants to ensure that Schwab’s clients are put at ease by adopting the technology slowly so that they don’t end up feeling uncomfortable given perceptions people sometimes have around biometrics.

Consumers grow leery of having their fingerprint, DNA or voice patterns stored on a system that’s not controlled by them. There is worry that these personal markers could be compromised—or are potentially less secure than the security systems that are already in place today.

“You have to educate them how it’s secure,” says Hathi. “It’s much more secure than ‘fax and sign,’ but because it’s a new paradigm, there is reluctance that it’s less secure. We have to help them understand biometrics.”

Anthony Schembri, managing director and advisor at Clarfeld Financial Advisors in Tarrytown, N.Y., would love to offer an extra layer of security to his clients, partly because some two dozen have had their email hacked, he says. Clarfeld has an authentication process where orders and requests can’t be put through without someone from the firm speaking directly with a client, and Schwab often requests a vocal authorization on top of the one Clarfeld already has in place. Schembri believes those extra calls could be eliminated with voice biometrics.

“Anything that will alleviate the burden of time, going back and forth, and stump fraudsters would be a huge help,” he says.

While the firm has spoken about it at conferences, they declined to speak in detail about its adoption, beyond confirming its use.

“Yes, voice biometrics,” says David Hoffman, with Vanguard’s public relations team, by email, as a way of stating that biometrics is being used at the firm. “But for competitive reasons, we can’t comment beyond that.”

One Piece of The Puzzle

Pat Carroll, CEO of ValidSoft, which makes voice biometric software for financial services firms, says the technology has taken off because of the relationship clients already have with their bankers and advisors over the phone.

“I think this audience has a particular relevance to voice,” he says. “It’s perfectly natural to have that communication channel with your bank for that purpose.”

At Barclays, where the technology has been in place since June 2012, clients are recorded during a normal call so the flow of conversation is not interrupted. The goal is to capture a good profile of the way a consumer speaks in full. Calls are normally recorded, as clients are routinely told, so capturing their voices is fairly standard. After enough of the speech pattern and sound has been captured, an agent tells them that they’ve been enrolled in the voice biometrics program.

While Hanlon says the firm has an enrollment rate of 97 percent, there is always the option for clients to opt out if they request to, and some do.

“They may opt out for personal reasons,” he says. “Or it may not be appropriate for them.”

Hanlon and others understand that some consumers are never going to feel completely comfortable having a third-party store their personal identifiers. Even Apple, which says that the fingerprints of iPhone users will only be stored on a consumer’s own phone, is catching some skepticism about privacy concerns and the potential for abuse.

However, consumers never seem to worry about leaving their fingerprints on door handles, vending machines and ATMs throughout their day. And their voice? Stand still on any busy street corner, or inside a local coffee shop, and recording a clear snippet of someone’s speech is fairly easy, with technology available to separate out the sirens, coughs and other background sounds. Even Schwab’s Hathi says that while “...all indicators are [voice biometrics] is more secure...like everything else hackers are out there.”

Still, Hathi and others believe that voice biometrics is providing a strong underlying layer of security that can lessen the risk of fraud.