/sites/all/themes/penton_subtheme_wealthmanagement/images/logos/footer.png
Recent
Recent
When Clients Get the Pink Slip
May 22, 2020
Reboot Your Work From Home Routine
May 22, 2020
Early Retirement Is Tempting Now. Don’t Do It
May 22, 2020
Digital Metrics Soar at Raymond James, TIAA
May 21, 2020
WealthTech Winners Circle Podcast: TD Ameritrade Bringing the Latest in Innovation
May 21, 2020
Featured
Poll: 15 Classic Books on Investing and the Markets
Apr 03, 2020
FICO Updates and Their Impact on Credit Scores
May 06, 2020
The Top Colleges for Financial Planning
Oct 03, 2019
The 10 Most and 10 Least Valuable College Majors
Aug 28, 2019

A Free Digital Scratch Pad for Breaking Away, Tool from TDAI Helps Advisors Envision a Shop of Their Own

RIA Economic Evaluator, the first tool to integrate FA Insight benchmarking, helps advisors determine how much revenue they might be missing out on.

A new lesser-known tool that helps financial advisors explore the economics of starting their own firm—and calculate the income they are potentially missing out on—has been flying under the radar this summer.

In July, TD Ameritrade Institutional launched what it calls the RIA Economic Evaluator, a free online tool any advisor can use to help determine how much they might be leaving on the table per year. The company has had similar tools in the past but this is the first to use benchmarking data from FA Insight, a benchmarking firm purchased by TD Ameritrade in 2016.

“I think it’s clever the way it’s positioned. It really is simple ... and they’ve got a nice engine behind it in FA Insights,” Brandon Kawal, a consultant at Advisor Growth Strategies, said about the tool.

Kawal, who has been involved in the development of similar tools and their modeling for companies throughout his career, said he could see any advisor curious about the economics of starting their own RIA being excited about having access to a tool like this one.

“Everyone wants to see the numbers, that makes sense,” he said. “[TDAI] could get some good user traction with this.”

The short questionnaire asks for only four to seven inputs depending on whether the advisor is employed by a wirehouse brokerage or an independent broker/dealer. Among the inputs asked for are the advisor’s assets under management, fee- and commission-based revenue, their payout percentages and estimated annual expenses.

This data is then used to approximate what income a broker is surrendering to their employer that might otherwise be able to pocket for themselves or invest in a registered investment advisory firm they own equity in.

The tool compares the results calculated to averages derived from advisory firms that participated in biannual studies by FA Insight. Results from the RIA Economic Evaluator also include a comparison to “standout” RIAs or those considered to be top-performing firms based on their ability to grow revenue and generate income for their owners. 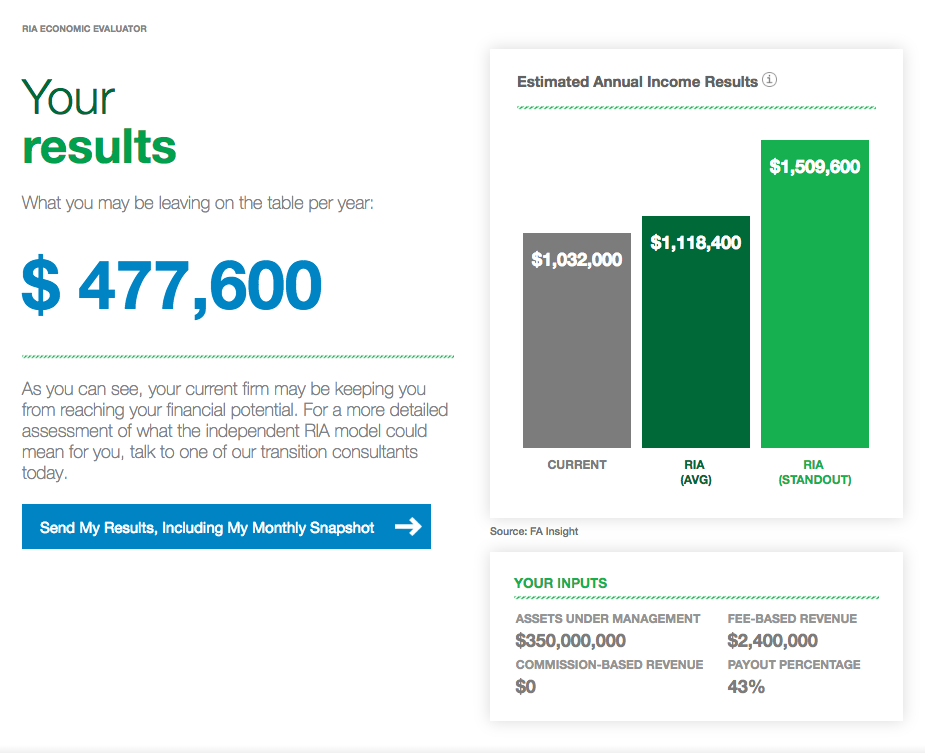 To some in the wealth management industry, especially companies built on servicing so-called breakaway advisors that desire to start their own RIA, a seven-question evaluation might seem overly simplistic but that was the objective.

The online tool is only an initial step in a full analysis that TD Ameritrade Institutional’s consultants complete with brokers, said Randy Magdaluyo, who manages business development at the firm. The tool was designed to be as easy and accessible as possible; something an advisor could complete in minutes at the office or at home, Magdaluyo said.

Once an advisor has their flash analysis of their business, they can get a month-by-month breakdown via email and choose to get in touch with a consultant, which is the ultimate goal of the tool. Scott Collins, director of brokerage independence at TD Ameritrade Institutional, did not share how many advisors have used the tool so far, but said it was already functioning as a pipeline connecting the firm to would-be RIAs.

Advisors with anywhere between $60 million and more than $900 million in assets under management have used the tool, but most advisors are managing between $150 and $300 million, a spokesperson for TD Ameritrade Institutional said.

“Everyone is focusing on RIAs as the next area of growth, and it’s becoming more competitive,” Dennis Gallant, a senior analyst at market research and consulting firm Aite Group, said. “I think a lot of [advisors] are putting their toes in the water and TD is in a position to potentially get some of them to stop by.”

The firm’s tool might also prompt others in the industry to begin offering one, or improve and expand an existing tool for advisors, Gallant said. Once an advisor begins flirting with the idea of starting their own RIA, the sooner companies like TD Ameritrade can engage with them on any level, the more likely they are to win that advisor’s business, he added.

“It’s important to get firms to at least consider you,” Gallant said. “It’s just a nice tool for FAs because a lot them have a lot of choices ... this is just a way of narrowing it down.”