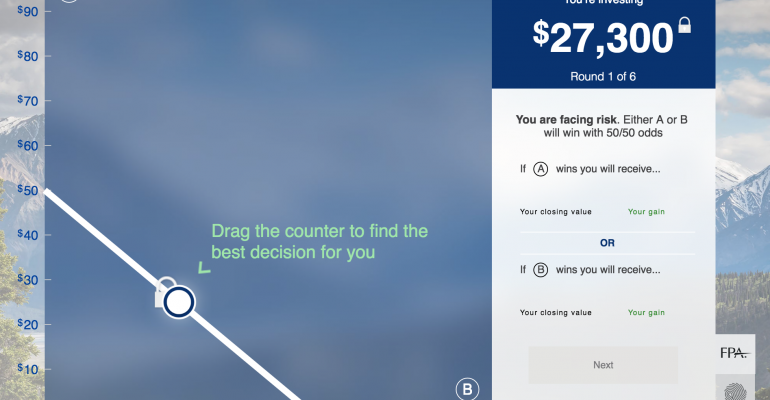 The Financial Planning Association is partnering with TrueProfile, a risk-profiling software company, to co-create a client profiling system that is based on game theory. The software company will form an advisory board of FPA members to shape the direction of the tool in the fourth quarter, and will make the technology available in early 2017 in the U.S. It has already been released in Australia.

The core problem in financial services is that we’ve spent the better part of the last five decades perfecting the science of advice and investing, said Bernard Del Rey, co-founder and CEO of Capital Preferences, the consulting firm that owns TrueProfile, speaking at FPA’s annual BE conference in Baltimore on Wednesday. The industry has forgotten about the science of understanding clients.

One popular tool that advisors use to understand clients is the risk questionnaire, which asks clients how risk-averse they are. But clients don’t understand the definition of risk, Del Rey said.

"Asking a client what is their ambiguity aversion is like asking them how many white blood cells they have; they’d probably say, ‘I feel OK, so I must have enough,’" said Shachar Kariv, chief scientist and co-founder of Capital Preferences, which sponsored the BE conference.

This new risk-profiling tool will use games to get at what a client’s decisions actually are.

For example, one module gives the user an amount of hypothetical money they have to invest in two different startups. One startup will fail, and the other will succeed. The user drags their mouse along a line to decide how much money they want to invest in each startup. If they have zero tolerance for risk, they’re going to put the same amount of money in each company, and if they have infinite tolerance, they’ll invest all the money into one company to maximize return potential.

Kariv called it “the space invaders of financial decision making.”

Kariv says there is mathematical theory to developing a survey. With a survey, there’s no statistical theory to analyze the data; you have to make assumptions. In addition, surveys annoy people.

Riskalyze is another company that has tried to get away from the traditional risk questionnaires. Instead, the company’s tool asks a series of risk/reward questions to determine how a client reacts in various situations, then uses an algorithmic analysis of their current holdings in order to predict a range of probable future returns. The advisor also checks the Risk Number against the client’s retirement goals and financial planning needs, working with the client to either adjust goals or risk as appropriate. The final "Risk Number," between 1 and 99 (where 1 is no risk at all and 99 is all the risk), determines how much risk the client wants, needs and should have in the future. The Risk Number approach accounts not only for risk tolerance and perception, but also for risk capacity.

Once TrueProfile comes up with a risk profile, it then helps the client prioritize their goals and offer investment products based on that.