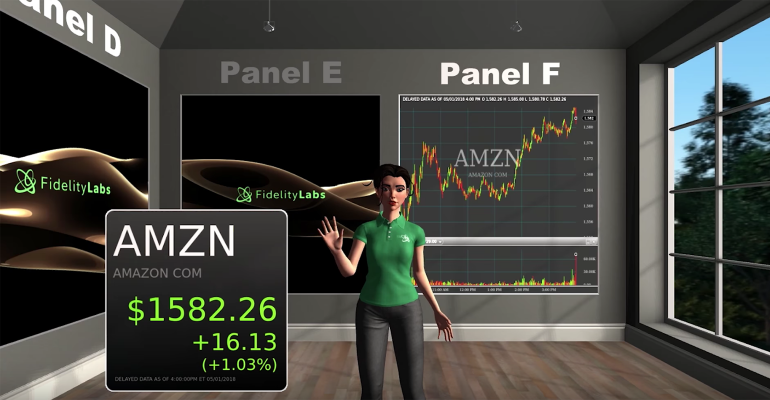 VR is not just for video games. Built from scratch, Fidelity collaborated with Amazon to develop its virtual reality financial agent, Cora.

If customers start demanding visits with their advisors in virtual reality, Fidelity wants to be ready. In a proof-of-concept, the investment company’s research and development division built a virtual “financial agent” that can interact with a client’s vocal commands.

The agent, called Cora, greets users in a VR environment and pulls up charts based on spoken cues. On the surface, it’s a test of Fidelity’s ability to create virtual data visualizations that are integrated with voice commands, said Adam Schouela, head of the company’s emerging technology group.

The project, which is a collaboration between Fidelity and Amazon, which provided the VR environment and vocal command technology via Alexa and Polly, is part of a larger look at “high-level” virtual reality use cases that could “potentially displace some of the legacy technologies,” Schouela said. It includes using technology for consumer education and more nuanced employee training, as well deepening client relationships with the firm and its advisors.

In fact, the immersive empathy module developed by Schouela’s team last year already graduated into a pilot project that’s been expanded regionally to train Fidelity employees. In the module, trainees are immersed in a 360-degree photorealistic scenario of a client hunched over a stack of medical bills—a scene that might be a reality for a Fidelity client calling customer support. The trainee then interacts with the client in a “choose-your-own-adventure” type experience, eventually seeing the outcome of the assistance provided. The module is designed to remind trainees of the human faces behind the calls they get.

The emerging technology uses cases selected by Fidelity, based on three- to five-year predictions where humans and technology will interact. “We want to be where our customers are,” said Schouela. Schouela also noted that they've now effectively created a virtual space that future clients and advisors could use as a virtual meeting room. With VR technology becoming cheaper and more widespread, he observed, it’s a possibility that’s on the horizon.

It’s a smart curve to get ahead of, say virtual reality stakeholders. “It’s a bit early to say just how VR will catch on in finance, but I think it can go a long way to developing the trust and transparency that are so crucial to successful client interactions,” said Ebbe Altberg, CEO of Linden Lab, the company behind the online virtual world, Second Life, and developer of the social VR platform Sansar. “Putting an actual avatar to a large, faceless banking entity can make a client feel heard, cared for, and comforted, and can lead to deeper relationships over time.”

Other technology observers say an experiment like Cora may be a little premature, especially with how few people are actually interacting at all inside of virtual reality environments—much less around something as personal as financial services. “I think it’s extremely early for them to be doing this, because there just aren’t masses of people online [in virtual environments],” said Charlie Fink, an emerging technology critic and author of a guide to augmented and virtual reality. He thinks the technology is shaping up to follow the development pattern of the PC, which took years to go from an office luxury to a home necessity. “I don’t think this is a bad idea, it’s just all about timing,” he added. “It’s not fishing where the fish are, but it’s fishing.”

Still, the proof-of-concept shows that Fidelity is investing in longer-term technology bets. “VR enables a level of access and mobility not always available in the real world—making people feel closer and connected to others even if they happen to be miles and continents apart,” noted Altberg. When it comes to human-based financial advice, Cora is one step that may help advisors, machines and finance all get a bit cozier.