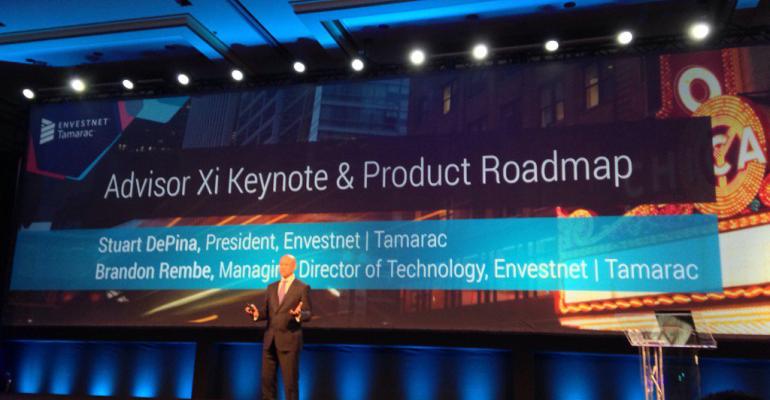 Though Envestnet Tamarac has invested a lot over the years to build an extensive ecosystem of cloud-based advisor technology on its Advisor Xi platform, it is rethinking its walled-garden approach.

To close out the first day of Envestnet’s Annual Advisor conference Chicago, Envestnet Tamarac President Stuart DePina announced that the company would open up its application program interface (API) to allow integration with third-party technology.

DePina said the decision was made from feedback with large RIAs moving to Tamarac that had already invested a good deal in technology outside of Tamarac’s core platform, such as CRM.

“We recognized that the way we’ve interfaced has been somewhat limiting,” DePina said.

So even though it will continue to invest in its own Advisor CRM, which it recently upgraded, Tamarac is also going to open Advisor Xi for integration with Salesforce and Junxure for CRM. Envestnet Tamarac Chief Technology Officer Brandon Rembe clarified that while the Salesforce functionality won’t be as deep as Advisor CRM, it will include real-time balance updates, automatic account creation and workflows within the Advisor View client portal.

There is also integration in the works for popular financial planning, document management and aggregation tools. The company also wants to add support for alternative investments, including a new integration with CAIS that gives advisors access to alternatives through Advisor Xi.

Nearly four years after Envestnet acquired Tamarac, DePina said the team is laying the groundwork to fully connect Advisor Xi with Envestnet to provide the firm’s full range of products, such as separately managed accounts.

“We’re finally getting to a place where we’re going to have an integration in place for Envestnet,” DePina said.

Rembe added the team is dedicated to releasing a new feature every eight weeks, with the release of the second generation of its client portal in July, compete with a new dashboard, real-time data, customizable layout and integration with MoneyGuidePro.

Rembe added that the team plans to enhance security and data aggregation by incorporating technology from Yodlee, add financial planning by integrating with Finance Logix (which Envestnet acquired at least year’s Summit), and improve the overall performance and speed of Advisor Xi.

According to DePina, 35 percent of large RIAs (firms with at least $1 billion in AUM) now use use Tamarac, but he stressed that the platform doesn’t serve just large firms. While the average Tamarac user manages $950 million, the median is around $370 million.

DePina added that the average AUM of individual advisors using Tamarac is $121 million, compared with the national average of $58.6 million.