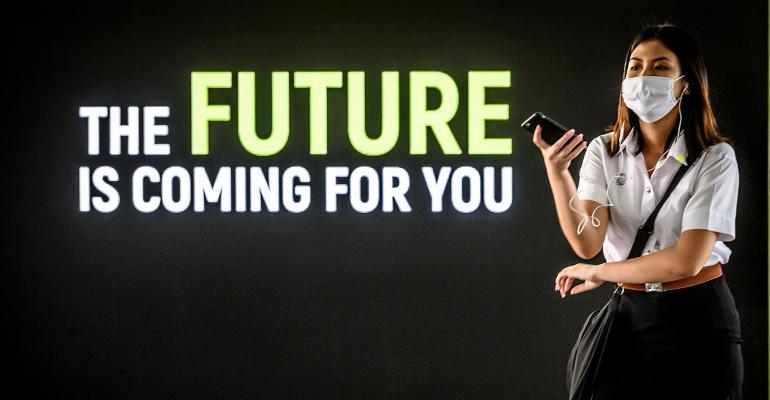 Clients are facing the pandemic by reevaluating early retirement, and even their own life expectancies. Technology providers are responding.

Just as society and the wealth management industry are adapting to the “new normal” of remote working and digitization, the technology used by advisors is evolving as well. In some instances, new features have been added, development has been accelerated, or priorities have shifted. In other cases, tech that existed on the periphery in the past is now front and center.

At Envestnet | MoneyGuide, financial planning has taken on a whole new meaning. Since its launch in 2000 as MoneyGuidePro (from independent software company PIEtech Inc.), the financial planning software developer has been around for market turmoil in 2001 and 2008, so today’s turmoil and increased need for planning is nothing new.

Tech adoption rates have grown, but the rate of growth lately has been exceptional.

“It would take seven years to move the needle [on digital adoption] that this has moved in three months—if you were lucky,” said Tony Leal, president of Envestnet | MoneyGuide. “We’ve been doing this for 20 years. Planning is [usually] just steady, slow growth.”

Without this pandemic, digital adoption rates among end clients might top out at 3% growth per year, he explained. “You’re not going to go from 8% to 63% of your clients being digitally engaged. You do from this though. This forces it.”

Advisors who are working remotely have been giving clients more access to tools like MoneyGuide’s financial planning modules, called Blocks, not only for planning but also as a form of engagement, said Leal. If the pandemic continues, that adoption rate will only grow and clients’ expectations for digital engagement will only grow, he added.

“This is not going to stop,” he said. “I’ll be darned if advisors are going to go and start taking access away from clients. You can’t. You’ve already opened the door.”

For younger clients, modules addressing credit card debt, college loans and life insurance were popular, while clients farther into their careers and UHNW clients looked at modules addressing the feasibility of retirement and a feature that looks at the compatibility of two different people’s retirement goals (for, say, couples married or otherwise).

Meanwhile, tax-efficiency technology developer LifeYield fast-tracked some of its technology based on client demand. One of the company’s tools that returns Social Security income scenarios added an upgrade in May that allows advisors to take a hybrid approach between cash flow- and goals-based retirement decisions. Its release was “fueled by the pandemic, specifically,” said Steve Zuschin, EVP of direct-to-advisor sales at LifeYield, ahead of the company’s pre-COVID-19 schedule.

The company witnessed a spike in early retirement analysis, he said. The first half of 2020 saw a roughly 30% increase in the number of tax-efficiency Social Security reports run at the firm, compared with the year prior.

“People are questioning those long-term plans,” he said. In 2008, those on the cusp of retirement decided to continue working longer, as their portfolios took a hit. Today, many nearing retirement are moving more quickly towards leaving the workforce, he said.

“People are now really accepting that this is the new normal and we have to get on with it, because no one’s going to do it for us,” he added. “We’re going to make a decision. We’re not going to wait around and see what’s going to happen.”

For its part, tax-planning software developer Holistiplan has made updates based on legislation related to the pandemic. Earlier this month it pushed out an update for CARES Act-related calculations, which it said was in demand from advisors.

Some end clients could be eligible in 2021 for stimulus payments, as long as they remain within phaseout limits. The updates warned users if they were nearing those thresholds, said Kevin Lozer, co-founder of the firm. That followed a previous update, also related to the legislation, that saw the removal of some AGI limits for charitable giving.

“Plenty of people deemed HNW are retired and received stimulus checks,” said Lozer. “The thresholds for phasing out of the stimulus were income-driven. If a HNW individual was living off their portfolio, they could have certainly fallen under the income thresholds.”

Advisors should expect their tech firms to continue adjusting to the “new normal,” especially as data continues pouring in from advisors and clients using tools to plan for the future—and each of those data points represents something a real person could be experiencing.

One unexpected change witnessed across financial plans was users decreasing their own life expectancy, said Leal. “I don't know if this made people look at where they are and that they took more of an honest perspective of their health scenario,” he said. He suspects that it has more to do with the fatality rate of the highly contagious coronavirus, than with client worries that they will outlive their portfolios.

“The planning data’s more interesting than it’s ever been, with this pandemic,” he concluded.