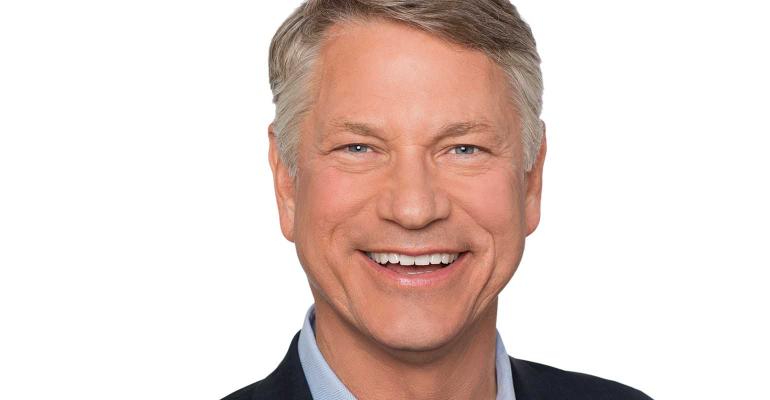 ClearingBid Seeks to Be the New Way to IPO

The tech firm wants to bring mainstream investors—and their advisors—into the IPO process, territory once reserved for favored clients, insiders and underwriters. But to take on Wall Street's reliable revenue generator, many moving pieces will have to fall into place.

Getting shares in an initial public offering is rarely an opportunity, even for clients of a registered investment advisor or a rep with an independent broker/dealer.

Often, only the favored clients of the wirehouse brokers and wealth managers, usually at firms underwriting the IPO to begin with, can get early access to the equity as the shares launch onto the public markets. That allocation process is often described, charitably, as opaque: Usually, an underwriter takes the offer to large investment banks and money managers, and they agree on the value of the shares, which are then sold internally at a discount so those early investors, ideally, realize a pop in price when they hit the street.

Matt Venturi, the founder and CEO of ClearingBid Inc., is on a mission to "democratize" that kind of IPO access. Just as firms have sought to use technology to throw open the doors for retail investors to domains once reserved for the wealthy—like private placements, collectibles and structured products—Venturi thinks the time is right to bring more investors into the market for pre-IPO shares.

His firm announced Thursday the launch of two of the three core components needed to make that happen: an open pricing engine and a digital orderbook, which, when combined at some point in the future with an investor portal, will represent “the industry’s first digital IPO network,” according to Venturi.

“We are opening up the blackbox of underwriting that is usually behind the curtain,” said Venturi, who has spent four decades on Wall Street, most of it in investment banking, though his first few years were as a retail broker at Merrill Lynch.

“We are starting with IPOs, but this will have applications to debt markets too,” he said of the technology being built at ClearingBid, which he founded in 2016. 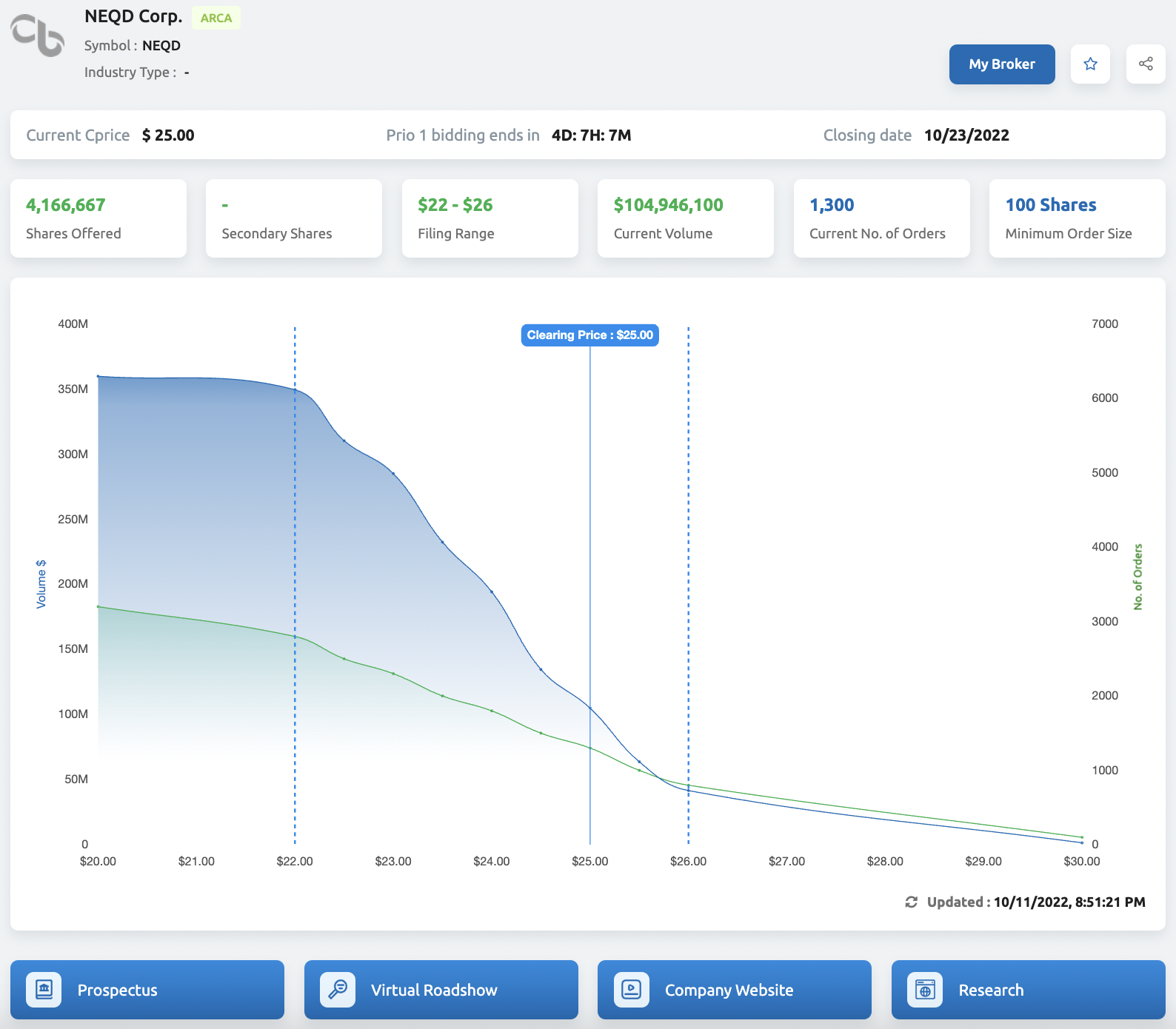 ClearingBid’s digital order book connects to existing brokerage order management systems, which in turn feed back to the firm’s pricing engine that tracks valuations in real time. The orders are prioritized based on their price and time entered.

The pricing engine is calibrating all of this data, which in turn lets underwriters determine demand, adjust allocations and establish a market-driven price for any IPO or new issue, prior to listing on a public exchange, according to Venturi.

“We are really piggybacking on the principles of the secondary market, using DTCC, making sure the customer has money in the account, and untethered access to the brokers,” he said. 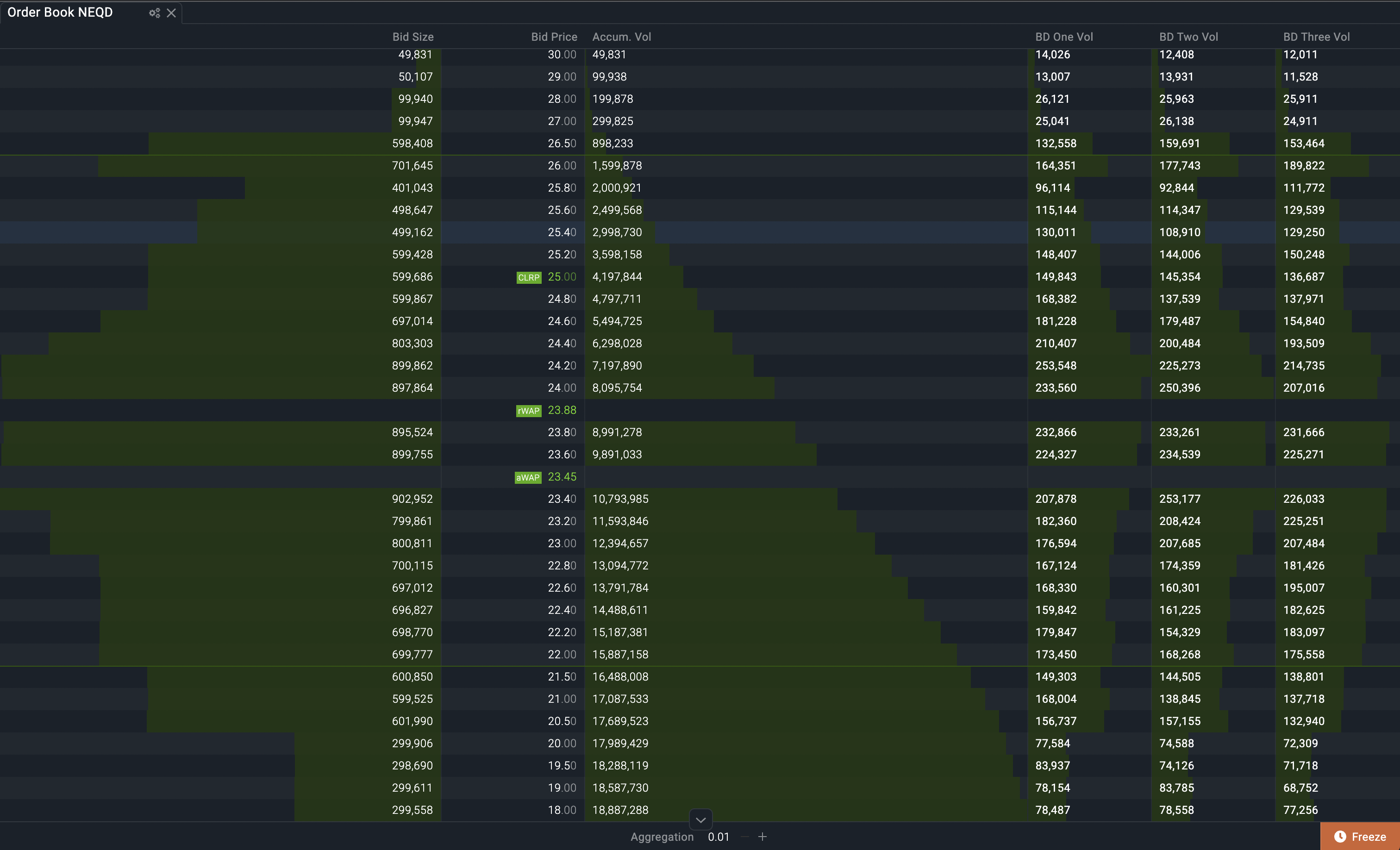 Master Order Book showing current Clearing Price (CLRP) at which the full offering size is subscribed, with depth and breadth of orders above and below the CLRP.

Among all the innovations on Wall Street, IPOs have changed little in their mechanics for the last 150 years.

There have been attempts to break open the system, largely driven by Silicon Valley firms long suspicious, and even at times contemptuous, of Wall Street's established practices that seem to enrich insiders at the expense of investors and entrepreneurs. Venture capitalists such as Bill Gurley have tried to tackle the issue, and many firms that have gone public in recent years, including WeWork, Spotify and Slack, have sought out alternative approaches with varying degrees of success.

“Lots of people have complained for decades about how inefficient the process is for pricing and allocation in IPOs,” said Jay Ritter, the Cordell professor of finance at the University of Florida, and a longtime researcher in the area of IPOs.

The first firm to try and broaden the IPO process was WR Hambrecht + Co in 1999 with its public IPO auctions. The idea was to essentially sell the shares directly to investors, with each share being sold for the highest price available during the bidding.

Yet “overall fewer than two dozen companies have used an auction to go public,” said Ritter, noting most famously Google's IPO in 2004. In financial services, Google was followed in 2005 by Morningstar and in 2007 by Interactive Brokers, each which also held public auctions for IPO shares.

Auctions, Ritter said, were intended to help level the playing field between the company issuing the shares and the underwriter, acting as auctioneer, to settle on a price that was transparent and signaled the true market demand.

But experiments in IPO auctions have largely stopped; in fact, only three of more than 250 U.S. IPOs in the 12 months that followed Google's IPO were conducted using auctions, according to researchers at Northwestern University's Kellogg School of Management. Why? A combination of factors: The process is cumbersome, and traditional underwriters pressure corporate CEOs into following the status quo. Another factor can also help explain the limited use: An unruly auction for IPO shares can resemble the same bidding up of prices that can happen in the post-IPO market. "A higher clearing price tended to be associated with lower IPO returns later on," the Northwestern researchers found.

Ritter agreed on the pressure of investment banks and underwriters, often one and the same, to keep the status quo.

“What about issuing companies, why haven’t they been using auctions?” asked Ritter rhetorically. “I think it is twofold, maybe threefold; one is analyst coverage, an analyst ... who covers your company, you better use that investment bank, and secondly (the firm) has specialists, and for the executives of an issuing company they might get access to those wealth management people.”

“A third issue kind of related is certification, if one of these big investment bank name brands is willing to do a deal that might give investors more confidence that this is a quality company,” said Ritter.

In their work, the Northwestern researchers suggest the industry pursue a hybrid version of traditional book orders with a more transparent pricing mechanism, and that seems to be what ClearingBid is attempting.

Venturi said the technology can address the cumbersome nature of auction IPOs, but among the keys to making ClearingBid a success will be enlisting the many middle-market investment banks to begin with—“the more the merrier”—that will “essentially rent the system” referring to ClearingBid’s platform.

Ritter said that ClearingBid is attempting to bridge the gap between the closed order books of the underwriters and a transparent, level playing field for true price discovery that lets a company successfully enter the public markets.

“If there were a lot of companies using auctions there would not be an unfilled niche, and ClearingBid is trying to fit into this unfilled niche,” he said.

Another key will be in pursuing maverick CEOs that want to go public to use the system. Asked if the still private company SpaceX, founded by Elon Musk, would be a suitable target, Venturi responded in the affirmative.

“Yes, Gwynne Shotwell [president and COO] at SpaceX is a perfect example of the kind of executive for us that are a little more forward thinking and not easily intimidated and able to stand up to the street,” said Venturi.