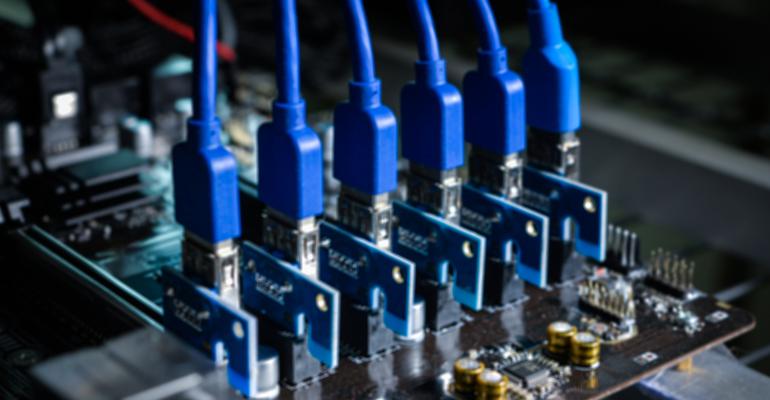 Bitcoin May Be a Bubble, But Blockchain Is Not

Bitcoin is a poor currency and a crazy investment -- but the technology behind it is a real breakthrough.

(Bloomberg View) --An influential new recruit has joined the chorus of bitcoin skeptics. The chief investment officer of UBS, the world’s biggest wealth manager, says it’s too risky to be added to the firm’s portfolios -- and his assessment is relatively mild. Others have called it “the very definition of a bubble” and even “a fraud.”

Those stronger terms are justified, especially after the latest spell of wild price volatility. But the idea underlying bitcoin -- blockchain, or distributed-ledger technology -- could be transformative.

The problem with bitcoin and other so-called digital currencies is that they’re a misuse of this technology. As either a new form of money or an investment, bitcoin has fatal disadvantages.

Tokens that are privately created -- "mined,” if you insist -- can succeed in a limited way as a means of exchange and be used to execute certain kinds of transactions. (Cigarettes in prison are a kind of currency.) But as a reliable store of value, bitcoin is much less useful, because its volatility is so extreme. The value of ordinary currencies is underwritten by governments and stabilized by central banks acting as trusted monopoly producers. Bitcoin and its rivals leave those vital roles vacant.

Moreover, bitcoin has no fundamental value as an asset -- no stream of future income, no ultimate assurance of liquidity or security, and (unlike gold, say) no alternative use. Its scarcity (hence some floor on its value) is purportedly guaranteed by the underlying technology, but most of its buyers simply take that on trust. Should they come to doubt that guarantee, its price will collapse.

In the meantime, bitcoin’s utility as a means of exchange depends on official tolerance -- a point rightly emphasized by UBS’s Mark Haefele. That tolerance cannot be taken for granted, especially as bitcoin’s appeal rests so much on the anonymity of its users. At the moment, its comparative advantage is its usefulness for illicit purposes.

All this said, the distributed-ledger technology that underlies bitcoin is potentially very powerful. By reducing the need for central intermediaries, it holds out the promise of processing transactions of various kinds more efficiently than today. Many banks and exchanges are exploring these applications.

Blockchain technology might also be used one day to produce new kinds of central-bank money. Central-bank digital currency could start to replace the electronic payment systems that financial institutions use with each other. A more radical idea is to use digital currency, issued and supervised by the central bank, at the retail level to replace physical cash.

All these ideas are worth study now. And they’ll still be worth pursuing after the bitcoin bubble bursts.