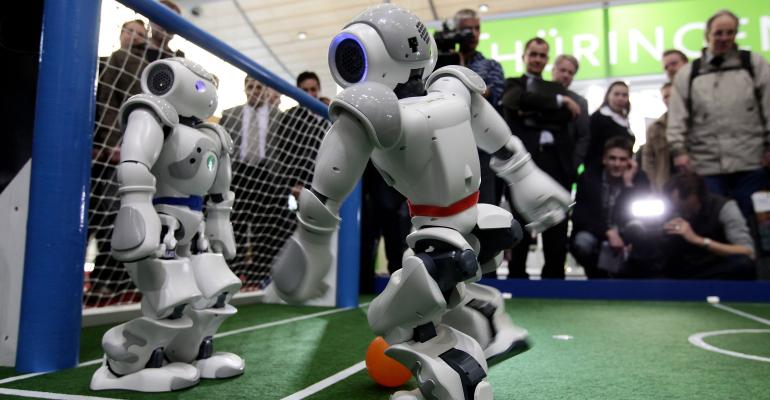 Automated asset allocation platforms aren’t the threat to financial advisors. Artificial intelligence is, and it’s coming faster than you think.

For most, “artificial intelligence” is still science fiction. While digital assistants like Apple’s Siri and, more recently, Amazon’s Alexa are just starting to come into their own, the technology hasn’t yet matched what Hollywood has taught us to expect.

So it’s easy to dismiss advances in computer-based intelligence as just another helpful tool, basically better versions of what we have now. But technologists working at the cutting edge of the field say something else: The adoption of AI isn’t just an evolution of what’s currently available—it is a rapidly advancing technology that has profound, and perhaps unimaginable, consequences, particularly in financial services.

Although “AI” and “machine learning” were two of the buzziest technology terms in 2016, advisors, even the early tech adopters, often dismiss AI’s role in wealth management with a “maybe someday,” and fall back on a familiar refrain: Investors will always want advice from a human.

But outside of the industry, leading AI thinkers, writers and academics aren’t so sure. Research from the World Economic Forum says AI could displace 5 million jobs over the five years. Over 20 years, Oxford University says it could be as high as 45 percent of all jobs in the U.S. Not just burger flippers or factory jobs either, but drivers, delivery workers, accountants and yes, financial advisors.

“Financial advisors give advice based on the market and based on long-term trends, and that’s exactly what machines are good at,” said James Barrat, a documentary filmmaker and author focused on AI. “Financial services has enough repetition in it to be pretty high on the chopping block. Just look at what happened to stock brokers.” Barrat himself plans to pull half of his investments out of a managed account in favor of an account with Schwab’s Intelligent Portfolios.

It’s helpful to define exactly what artificial intelligence is.

AI is a computer science that uses statistical analysis of a data set to make predictions or solve problems, and computer scientists break it down into three basis types.

Artificial Narrow Intelligence, or “weak AI,” is designed to focus on a specific task. Artificial General Intelligence, or “strong AI,” is a computer that could accomplish any intellectual task capable by a human. Finally there is Artificial Superintelligence, more intelligent than a human and, with machine learning, able to continue absorbing data and creating outputs beyond what a human brain could possibly deliver.

We are completely surrounded by Weak AI. Consider predictive Google searches, product recommendations on Amazon, and robo advisors matching investment allocations to a desired outcome. Experts debate when strong AI, not to mention the “superintelligent” version, will be created, but there is little doubt that it is coming.

One of the most famous examples of Weak AI is IBM Watson, a question-answering computer system capable of processing natural language. Though it successfully won a Jeopardy! contest against two of the game’s best human champions and can bring disparate information together far quicker and with fewer errors than a human, it’s still incapable of matching a human’s intellectual abilities.

IBM has an entire team dedicated to developing Watson’s utility for wealth management.

Alex Baghdjian, a senior associate on IBM’s wealth management team, said their core offering, IBM Watson Client Insight for Wealth Management, can analyze a client’s profile, and “sentiment,” to identify products and investment themes they would be most likely to pursue. Based on a wide variety of inputs, it can also predict unhappy clients who are likely to leave an advisor, giving the advisor a chance to intervene.

IBM Watson may be the most well known, but it’s hardly alone. Swiss research firm MyPrivateBanking Research found that banking and wealth management firms are adapting “chatbot” technology to provide 24-hour customer service, and set appointments that are automatically scheduled into an advisor’s calendar.

Dream Forward is a new 401(k) provider that uses AI to handle all of the administration work for its team of 300 advisors, as well as improve plan participant behavior. Vestorly is using AI to automatically create and execute a marketing strategy custom-tailored to an advisor’s unique messaging and client interests.

RAGE Frameworks is currently working on a new wealth management product that automates portfolio management, rebalancing and goals monitoring while using an AI program to track 100,000 news sources from 20 different languages for anything that can impact portfolio performance.

“Our goal is to arm the advisor with a whole bunch of intelligent agents to do the 24/7 monitoring and deal with the information overload problem,” said Joy Dasgupta, RAGE Frameworks’ senior vice president of marketing and corporate development. “If it is true today that 70 percent of the time advisors spend is not on advice… AI takes away that stuff and allows advisors to focus.” RAGE Frameworks counts three of the top wirehouses as clients.

Always a Need for Humans

A common trait among all of these firms is an insistence that their AI technology is built to support financial advisors—not replace them.

“These are still-evolving technologies that are not able to fully displace human advisors, but rather will make them more efficient so they can focus more on building relationships and exercising final judgment,” says the head of IBM’s wealth management team, Robert Stanich. “Artificial intelligence will make emotional intelligence and ethics more important, and that is where advisors can continue to add value.”

But the biggest obstacle to automating the entire wealth management relationship is that the technology isn’t there—yet. An AI that can handle high net worth tax planning or estate planning is still far off into the future.

The other factor is how AI would work within the highly regulated world of financial services. Rosalia Engchuan, a senior analyst at MyPrivateBanking Research, says there are too many legal questions facing full automation. “Can bots be held accountable? Who will be responsible in case of misconduct? In the end it is the regulators’ job to create a framework for these new technologies,” Engchuan said.

“Our view is that the execution of tasks will be taken over by the machine,” Dasgupta said. “The design of these processes and how the automation happens will be done by humans. That’s the model of the future: human-designed, machine-executed.”

But to those who have examined the cutting edge of AI, the “human touch will always be needed” protest sounds familiar.

“We all have cognitive biases around our own preservation,” said Barrat said, whose book, Our Final Invention: Artificial Intelligence and the End of the Human Era was named a Definitive Tech Book of 2013 by the Huffington Post. “Everyone wants to feel special.”

Banks claimed customers would always want human tellers dispensing and collecting their money. Many retail companies are suffering under a long-standing belief that customers will always want to actually hold items before they buy them, and certainly no one would buy a pair of shoes they can’t try on first—until Zappos proved the opposite.

Barrat points out that unlike previous technology revolutions, AI, even in its nascent form, is disrupting highly skilled jobs. AI is being used to detect cancer in X-rays and CAT scans better than human doctors; law firms are employing AI for legal research, and some newsrooms are turning to computers to write sports and business articles. Computer algorithms automatically execute far more than half of all trades on the stock exchanges.

Industries that have felt the pinch of automation have responded by defining their value in increasingly narrow terms. With investment management effectively commoditized through automation, “financial planners” are becoming more prevalent. As financial planning gets digitized, what’s next?

Barrat’s recommendation is for advisors to get on the side of automation and learn how to use the tools. The ones best able to improve efficiency, cut costs, increase scale and meet client demands will be in the best shape. But it’s likely that will be a far smaller industry than the one we currently have.

“It comes down to a small number of people that can do a lot of work using the Internet, automation and AI. The wealth that comes from that goes into fewer and fewer hands. Jobs will be displaced,” he said.