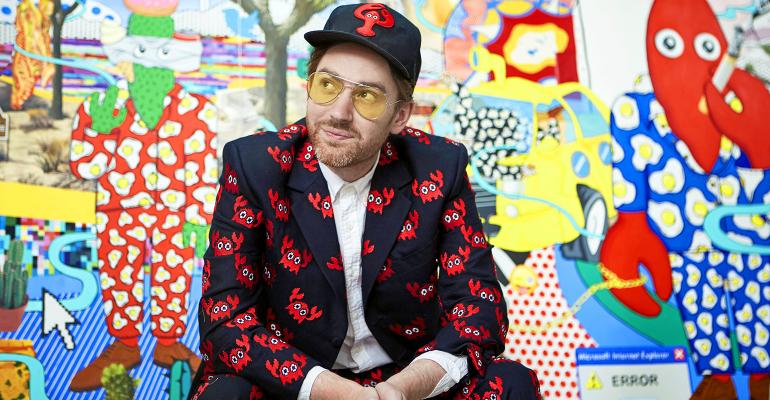 By Vivianne Rodrigues and Rob Urban

(Bloomberg) --Contemporary artist Philip Colbert, whose colorful, high-spirited art is finding buyers around the world, had been toying with the idea of creating his own catalog system to prove the authenticity of his expanding body of work.

“I had a dealer in Japan who had been telling me I needed to have better forms of certification for my artwork, because people are buying art as an investment,” said the British artist, who appropriates pop culture images in his paintings, fashion and furniture. “Art is a currency in a way; at the end of the day when they come to auction, the provenance is a very important element of their value.”

Then he met Rob Norton, the founder of Verisart, a U.S.-based startup that’s using blockchain, the ledger technology underlying Bitcoin, to verify the authenticity of artwork. It’s a problem as old as art itself, said Norton, and artists have long been unreliable when it comes to documenting their own work. As far back as the 17th century, Rembrandt’s dealer complained of his client’s poor record-keeping, Norton said.

Blockchain creates an immutable, traceable record of every transaction, whether it’s art changing hands or Bitcoin. Widespread adoption of the technology could give a boost to the market for art online, which has yet to explode. Online sales currently account for only about 8 percent, or $5.4 billion, of the global art market, according to a report by UBS Group AG and Art Basel released this month.

Trust -- or lack of it -- is at the core of the challenge, with potential buyers balking at the possibility of spending considerable sums on works whose provenance can’t be fully verified. Sources estimate the value of fraudulent activity in the global art market to exceed $6 billion per year and 80 percent of such activity is due to forgery, said Norton, the former chief executive officer of Saatchi Online and Sedition Art.

Last year, three men were charged in New York with making counterfeit Damien Hirst prints and selling them online for more than $400,000, according to ArtNews. The arrest followed a sting operation by undercover New York police officers, who purchased two of the pieces, which were advertised as “limited edition” prints online, alongside fake certificates of authenticity and purchase receipts.

When it comes to art, “there’s a higher hurdle of trust that you have to clear, you have to know that what you’re buying is real,” said Norton. “Art is the second-largest unregulated market after illicit drugs and it’s significantly overshadowed by fraudulent activity. You can accelerate trust and liquidity by providing better standards for verifiable, global certification.”

The 800-pound gorillas have already arrived. Google, Microsoft Corp. and International Business Machines Corp. are all developing blockchain-related projects, a market already worth more than $700 million and growing rapidly. Such demand is fueling several startups that use blockchain to verify artwork.

Codex, based in San Francisco and London, is going after the collectibles market, for everything from art to jewelry to antique cars. It has drawn investment from Pantera Capital, a hedge fund that invests in blockchain technology and cryptocurrencies.

Newly minted crypto-millionaires and billionaires will be natural art buyers, according to Pantera. Codex is also working on an application called Biddable that will allow cryptocurrencies to be used to bid in art auctions.

Verisart started in 2015 as a phone app for artists to create their own system of art verification. That approach didn’t take off, said Norton. Then the company built a Web app working with Ahmed Elgammal, a computer science professor at Rutgers University.

“We were a little bit early, we were figuring out where the market was, getting feedback from artists, and building a platform that people could use,” Norton said. “Now increasingly working with partners, those certificates can be customized.”

Colbert’s certificates, for example, contain small reproductions of the piece itself called “image hashes,” along with all of the relevant information about its creation, ownership and movement, such as whether it was part of an exhibition. He’ll have a show in Tokyo in September and Beijing next February.

Since Verisart uses the unaltered Bitcoin blockchain rather than a customized version, one risk may be that their effort can be easily replicated, since it brings little in the way of new technology. Some collectors, particularly those who buy and sell privately may also be reluctant to share their information in such a public way.

“The blockchain is a more efficient method of verification,” Colbert said. “You’re not worried about the authentic value of your work, because it’s all about locking down the time and place. Then all those fakes aren’t doing you any damage. All those fake Mona Lisas don’t do the Mona Lisa any harm.”

Ultimately, putting art on the blockchain could lead to a decentralized art registry that would cover a significant amount of the world’s art.

“Over time, different registries will be able to share those image hashes and you could consolidate and build effectively a decentralized art registry,” Norton said. “There won’t be just one registry out there for all the art and collectibles’ markets but we do see the basis to build a decentralized title registry on the back of image hashes and cryptographic proofs.”

The service may potentially become popular among artists selling limited edition prints, Norton said. Shepard Fairey, a Los Angeles-based artist best known for his portraits of President Obama and pictures of immigrants, was so impressed that he not only started using Verisart, he also invested in the company.

“We’re excited to see Verisart develop and meet artist and gallery requirements for trusted digital certification,” Shepard and Amanda Fairey, his wife and business partner, said in a statement. “As artists move away from paper-based certificates of authenticity to digital ones, Verisart continues to add to and improve its service.”

Fairey’s art is widely copied and can be seen at protests and other political events, so verification can be key.

Blockchain certification on its own may increasingly turn into a generic service, potentially being explored by big players such as Facebook and Microsoft. But Verisart’s ability to allow artists to customize their own certificates and image hashes will give it a competitive edge, Norton argues.

“Our view is that there won’t be just one registry out there for all the art and collectibles," Norton said. “But we do see the basis to build a decentralized title registry on the back of image hashes and cryptographic proofs.”